This week’s Newsmaker Interview is with three-term State Representative Drew Stokesbary (R-Auburn), a rising star in the Republican Party.  The Notre Dame Law School graduate is the ranking Republican member on the powerful House Appropriations Committee.  Stokesbary shares his thoughts on the 2020 legislative session, the controversial sex education bill and subsequent referendum campaign, the plastic grocery bag ban, and his efforts to help college athletes be just like everyone else and receive compensation for their talents. (Shift)

The Inslee administration’s (mis-)management of Western State Hospital is again being criticized as patients and staff have been diagnosed with coronavirus.  Among the many problems the state’s largest mental hospital has faced under Governor Jay Inslee has been the 2018 failure to meet federal quality guidelines (costing the state $53 million) and the recent slew of physical assaults on staff..  The latest condemnation of the Inslee administration’s lack of  competence comes from the Service Employees International Union (SEIU), a major contributor to Inslee’s gubernatorial campaigns and other Democrats.  The SEIU is critical of the administration for requiring non-medical personnel to handle physical health procedures and for not supplying enough protection gear for workers. (News Tribune and Seattle Times)

Senator John Braun (R-Centralia) is critical of Democrat lawmakers for their “reckless tax and spend policies” during the 2020 legislative session and is asking Governor Inslee to use his veto power to “bring this budget back to reality.”  In an email to Republican supporters, Braun criticizes the Democrats’ irresponsible behavior in raising taxes and spending unexpected revenue the state juswt found out about last month, instead of saving it for a rainy day.  Braun points out, “If this outbreak has taught us anything, it’s that our economic picture can change drastically over the course of a week.” (Washington State Senate Republicans email)

The Department of Homeland Security has extended the deadline for Washington citizens to obtain enhanced licenses by one year to October 1, 2021.  Because Washington State allows non-citizens to obtain drivers licenses, an enhanced version or a valid passport will be required to fly domestically starting next year, though the federal government has extended the compliance deadline several times. (Seattle Times)

Governor Inslee signed a bill that allows the state to share with tribes the state’s portion of sales tax revenues collected by non-tribal businesses operating on reservations.   The 2020 legislative session was certainly prosperous for Washington State tribal communities.  Besides the annual $30 million sales tax windfall from the passage of HB 2803, the Democrat lawmakers also gave tribal casinos exclusive rights to sports gambling over the objection of non-tribal card room operators. The Democrats took good care of those in the tribal communities who have been pouring money into Democrat campaigns for years. (Everett Herald, Washington State Legislature Bill Summary, and OPB)

Secretary of State Kim Wyman said she is unable to alter constitutionally mandated requirements for the number of signatures and deadlines for referendums, yet she will not reject ballot petitions that meet the “spirit of the law.”  This will enable the Referendum 90 campaign (the repeal of the Democrats extreme sex education bill) some flexibility in how they gather and deliver the approximately 130,000 necessary signatures to allow the voters decide the issue on the November ballot. (Washington Policy Institute)

The priority for assisting King County’s sizable homeless population is to keep them in place and not risk spreading the virus by moving the individuals around.  A key to this strategy is improving the sanitation and hygiene within the current encampments.  To alleviate the close quarters of local overnight shelters, King County has opened an emergency facility at Boeing Field, where there is considerably more “social distance” between cots.  (MyNorthwest)

The King County ombudsman is finally investigating months-old reports that the cleaning of Metro buses was done poorly before the outbreak of COVID-19.  In November, workers complained that the seats of the drivers and riders were not cleaned properly and that spills were often left uncleaned for hours.  While not responding to the previous complaints, King County Metro said that, since the outbreak, its crews spray all bus handrails, seats, windows, and other high-touch areas each night with a sanitizing solution that kills viruses.  (Seattle Times)

The CEO’s of the Tri-City Regional Chamber of Commerce, Visit Tri-Cities, and TRIDEC deliver an informative op-ed outlining the reasons why the four lower Snake River dams are needed.  The local business leaders explain that the clean energy the dams provide is the foundation of the region’s agriculture, transportation, and tourism businesses.  The community leaders presented their opinions as the federal government is seeking pubic comment on its recent study which concluded that the dams are a vital part of the region’s economy and should not be breeched (as demanded by rabid environmentalists who do not live anywhere near the dams). (Tri-City Herald)

Early frost reduced the amount of Washington State grapes harvested in 2019 by 23% compared to the previous year.  However, wine industry analyst state that those grapes picked were higher than normal in quality and should produce excellent wines. (Washington AG Network) 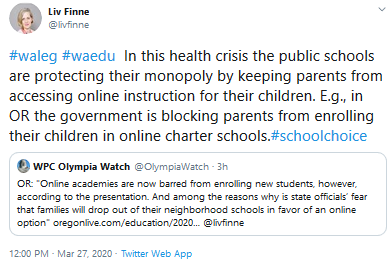