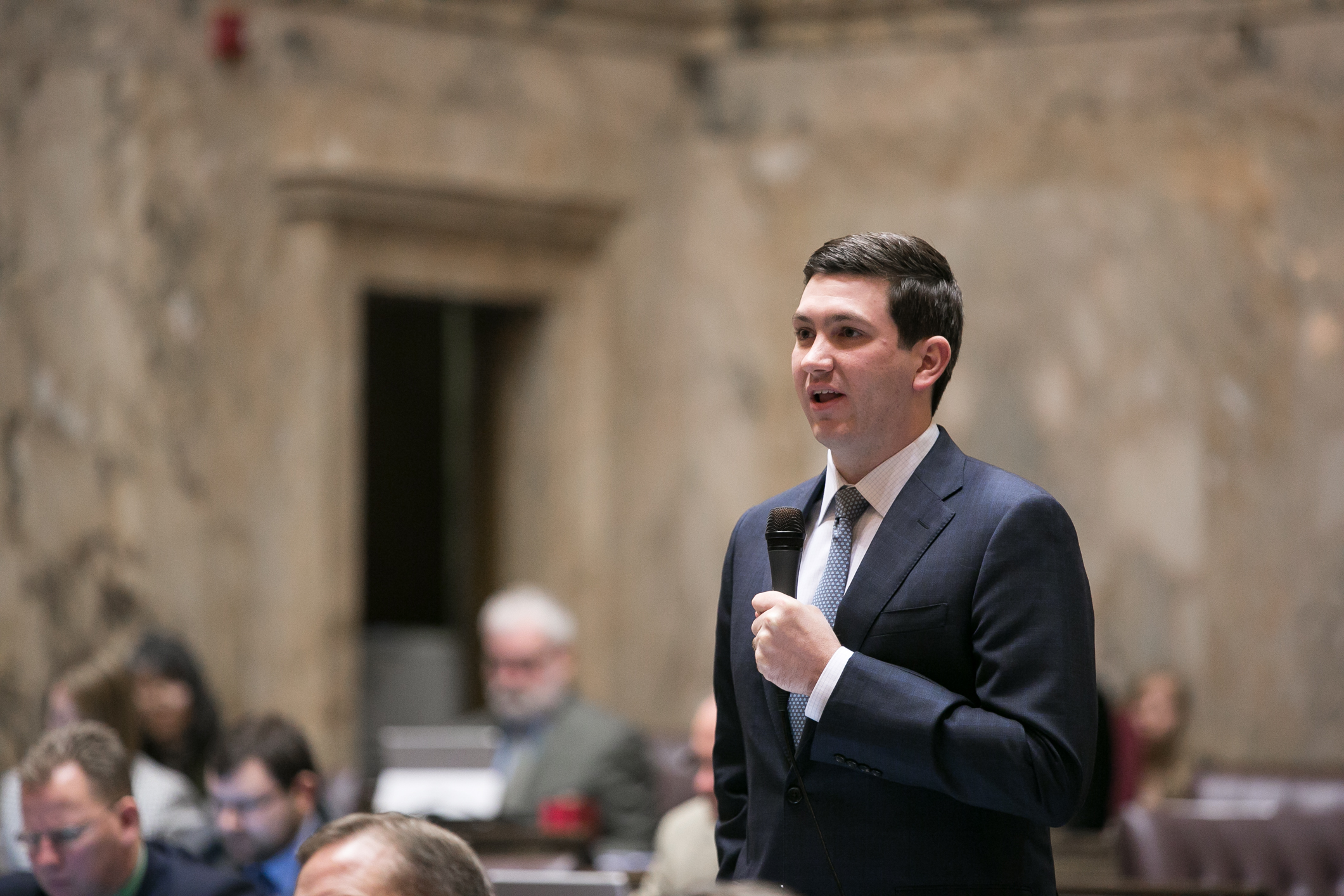 This week’s Newsmaker Interview is with three-term Representative Drew Stokesbary (R-Auburn), a rising star in the Republican party. The Notre Dame Law School graduate is the ranking Republican member on the House Appropriations Committee.  Stokesbary shares his thoughts on the 2020 legislative session, the controversial sex education bill and subsequent referendum campaign, plastic grocery bag ban, and his efforts to help college athletes be just like everyone else and receive compensation for their talents.

Overall, how would you rate the 2020 legislative session?  Would you consider it a “moral victory” in that it could have been far worse for Republicans?

I think Washingtonians are better off because bad bills like the low carbon fuel standard (which would have raised gas prices by 50-60 cents), burdensome firearm restrictions and various tax increases on health care (including taxes on insurance providers and prescription drugs) failed to advance. So in that sense, the outcomes could have been worse.

But plenty of other bad bills passed over Republican objections, like a tax increase on doctors and other medical providers and comprehensive K-12 sex education. And countless good bills that would have made Washington more safe, affordable and accountable failed to advance. That was quite disappointing.

One of the most extreme measures the Democrats were able to pass was Superintendent of Public Instruction Chris Reykdal’s controversial sex education bill.  What is your view of the legislation and do you think the voters will overturn the measure with Referendum 90 in November?

I strongly opposed the legislation. It’s unfortunate that the majority party chose to make it such a high priority. Some districts have already been teaching a curriculum that complies with this bill, so clearly a bill wasn’t necessary to permit those districts to do so. Other districts have announced their opposition to the bill and urged the Governor to veto it. I think they know more about what’s appropriate for their students than politicians in Olympia, and it’s unfortunate that the state won’t defer to their expertise and discretion (or parents, for that matter).

I don’t know how voters will react in November. I received more constituent emails on this topic than any other, but there are millions of voters who still unaware of this issue. The (rightfully) concerned parents who organized thousands of people to contact the Legislature will now need to get their message out to hundreds of thousands of people.

The Democrats failed to pass a couple of their most extreme measures, including allowing convicted felons to have their voting rights restored before they have completed their sentence.  Senator Kuderer has said she will push for the legislation again in 2021.  What is your view of the legislation and do you think it might pass in the next legislature?

I don’t think Sen. Kuderer’s bill is a serious proposal. It also pushes crime victims to the brink by removing incentives for felony perpetrators to make restitution.

Washington law already automatically restores voting rights of formerly incarcerated individuals once they complete their prison sentence and any required community custody. Waiting to reinstate voting rights until after the sentence completion is good policy because it incentivizes individuals to comply with the terms of the community custody. Current law also requires former offenders to make regular payments toward any court-ordered restitution to their victims as a condition to maintaining their voting rights. Sen. Kuderer’s unserious proposal would harm victims by removing this incentive.

Many called on Governor Inslee to veto the Plastic Grocery Bag Ban bill that passed during the session due to the spread of germs by multi-use bags.  Should the governor have listened to those who say the bill is bad public health policy before he signed the legislation?

Unfortunately, the governor signed this bill—which I voted against—on Wednesday. There is certainly some concerning evidence that reusable bags exacerbate the spread of germs. Thankfully, a number of cities, including Kent, have temporarily suspended their plastic bag bans during the current coronavirus outbreak. And the new state law doesn’t take effect until January 1, 2021, at which point the current public health crisis should have subsided. But I hope scientists and policymakers continue to examine the efficacy of banning plastic bags, especially with regard to public health concerns, and that the Legislature is willing to revisit its top-down approach.

Governor Inslee again failed to pass his latest major environmental legislation.  This time his expensive Low Carbon Fuel Standard failed to be passed by the Senate.  Do you believe we will see it again in the future but in a different form?

The governor has proposed a serious of costly environmental regulations every year since he was elected, and I expect that trend to continue as long as he is in office. Luckily, most of his proposals have failed to get traction even in the Democratic-controlled Legislature.

The low carbon fuel standard (LCFS) is particularly egregious because it reneges on a deal made in 2015 to fund a large set of highway projects across the state. In addition to reforms at WSDOT and sales tax changes, the 2015 package prohibited the governor from implementing an LCFS.

And if the law goes forward, not only will it break the 2015 promise, but it will result in an enormous increase in the cost of gasoline. Based on experience in California and Oregon, the cost of gas would increase by 50-60 cents per gallon. This is a gas tax increase without any road projects to show for it!

Despite all the rhetoric we hear about the regressive nature of our tax system, a 50-60 cent gas tax increase would be incredibly burdensome for low-income working families. Most people already choose to live as close to their job as they can afford. If the cost of their commute increases dramatically, they can’t afford to move any closer and shorten their commute; they must simply pay the increased gas costs.

You have been an advocate for allowing college athletes to be paid for their name, likeness and image.  The NCAA has recently modified their restrictions allowing the students to financially benefit starting next year. Do the NCAA’s actions resolve the issue or is there more that needs to be done?

I believe student-athletes should be allowed to be compensated for their name, image and likeness because I believe in free markets, personal responsibility and fairness.

Republicans talk a lot about free markets personal responsibility, yet current NCAA rules prohibit student-athletes from being paid and thus being able to take care of themselves and their families financially. Many of these college athletes have unique skills and talents that people like me are willing to pay for—by buying shoes, jerseys, video games, etc. Yet the NCAA uses its monopoly power to forbid this.

It’s also a matter of fairness. Every single non-athlete college student retains their name, image and likeness rights. They are not only permitted to seek outside compensation, but applauded when they do so. Music and drama students can be compensated for their performances. Chemistry students can get paid for a summer job working in the chemistry lab or interning with a pharmaceutical company. Entrepreneurs can launch billion-dollar companies from their dorm room. And none of this changes if the student is on a scholarship. There’s no reason we should tell a student on a football scholarship that he can’t make money doing football things, but a student on a chemistry scholarship can make money doing chemistry things.

The NCAA did indeed announce its intent to loosen these rules, but that was only after California passed its groundbreaking law, which was modeled after the proposal I introduced here in Washington. Public pressure led the NCAA to change its course, and sustained public pressure is necessary to ensure the NCAA follows through in a meaningful way.