The reaction of Democrats looking for higher office upon hearing that Lt. Governor Cyrus Habib will not be seeking re-election this year.

In a surprising announcement – and a welcome one – highly partisan Democrat Lt. Governor Cyrus Habib said he will not be running for re-election in 2020.  The former FUSE board member stated he is leaving politics to “enter the Society of Jesus.” Habib was not specific about what he will be doing next, except to say, “At this point, it is too early for me to know where my life as a Jesuit will take me, but I am confident that it will involve teaching, intercultural and interfaith dialogue, advocacy and spiritual accompaniment.” That doesn’t sound like it will also “involve” the hyper-partisan attacks on Republicans that Habib has been known for in Olympia, for which we can be thankful. (American Magazine)

With Habib’s announcement about not running for re-election, there are currently three people who have filed to run for Lt. Governor.  Former Seattle City Council candidate Ann Davidson Sattler and Joseph Brumbles affiliate themselves as Republicans, while Clifford M. Greene lists his party preference as “Other.”  It will be interesting to see how many Democrats will jump into the Lt. Governor’s race since it might provide a backdoor entrance into the Governor’s mansion, given Gov. Jay Inslee’s continuous promotion of himself for another job (especially if Joe Biden is successful in November).  (Washington Public Disclosure Commission, Shift and Joseph Brumbles Campaign)

The City of Olympia has waived the fees for retailers who provide paper bags, in order to stop the possible transmission of the coronavirus through re-usable grocery bags.  The State of Maine has also delayed the implementation of its plastic bag ban, which was to start next month, until January 15, 2021.  There are more calls for Governor Inslee to veto the recent plastic bag ban bill the 2020 Washington Legislature passed.  Not only does this make good public health sense, but there is also mounting evidence that doing away with plastic bags and replacing them with re-usable grocery bags does not have the environmental benefit many environmentalists claim it has.  Truly shocking that far-left greenies would overstate the value of their earth-saving ideas. (Daily Olympian, Plastics News, and Washington Policy Center)

Gov. Inslee and the Democrat-controlled legislature once again failed to provide the resources needed to assist troubled youths in the state’s foster care programs.  Despite a 20% increase in government spending in the state’s current two-year budget, Democrat lawmakers did not prioritize the needs of those who take care of Washington’s foster children.  As a result, the expensive solution of children being forced to stay in hotel rooms (with up to three adults to supervise the child) will continue. Yeah, that makes sense. (Crosscut)

Washington State Supreme Court Chief Justice suspended nearly all in-person court hearings in the state until April 24th. This applies to criminal hearings where the defendant is not incarcerated and all civil matters. This is the result of an agreement between the state’s prosecuting attorneys and defense lawyers. (Everett Herald)

“Social distancing” is impacting how local governments conduct public meetings. Even though the state’s Open Public Meetings Act requires that council chambers be open during meetings, many local governments are working on improving methods for both officials and the public to participate through telecommunications. (Everett Herald)

King County Assessor John Wilson says there are limits the county can do with property tax collection to help those financially impacted by the coronavirus.  Property tax revenue pays for the operation of many levels of government (especially schools), so Wilson does not believe it is realistic to waive the tax for a year.  Instead he and other county assessors are looking at delaying the due date to pay taxes by 30 days. (MyNorthwest)

A signature-gathering process has begun to place an initiative before Olympia voters to decide if they want to examine setting up their own public utility to deliver electricity..  Currently city businesses and residents obtains their power from Puget Sound Energy (PSE).  If the measure passes in November, then the city will begin to examine whether to form their its power supply utility, which would also need to be approved by the voters.  Opponents of the measure believe breaking away from PSE will lead to higher energy costs. (Daily Olympian)

The annual Bloomsday Race in Spokane has been postponed until September.  Many people were fearful that the annual May event, which normally has 50,000 runners, was going to be cancelled.  Race organizers were able to work with regional government officials to reschedule the event, and hope local businesses will still be able to receive the much-needed revenue generated by the event. (Spokesman-Review)

The Yakima Herald praised the bi-partisan effort in the legislature to find funding for the transportation projects that Governor Inslee put on hold following the passage last fall of I-976 ($30 car tabs).  The newspaper’s editorial was also critical of the Democrat-controlled legislature for not ending the practice of “title-only” bills, which skirt state constitutional requirements for public notification and hearings for legislation. (Yakima Herald)

Washington State’s Commissioner of Public Lands Hillary Franz blasted out an email to tell everyone “that this is not time for campaigning.”  Yet this message is contradicted by the huge “contribute” button at the bottom of her email, which also asks people to “make a grassroots contribution.” It is interesting to note that, according to Public Disclosure Commission reports, Franz’ campaign had blown through $532,000 in expenses by the end of 2019, while raising more than $760,000 – by far the most any of Washington’s “2nd tier” statewide candidates (offices that are not Governor or Attorney General). Of course, since Franz was seeking to move into the governor’s mansion after Jay Inslee announced he wanted to move on to the White House, she had plenty of (expensive) work to do ingratiating herself with the far-left activists who dominate Democrat primaries in the state. (Hillary Franz email and Washington Public Disclosure Commission) 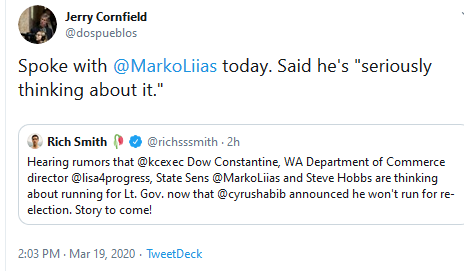