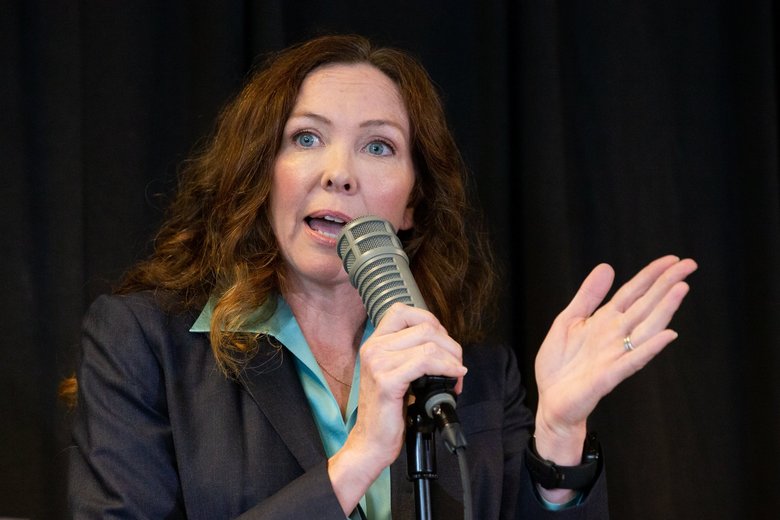 This week Shift sits down with Ann Davison Sattler, 2019 Seattle City Council aspirant and 2020 Republican candidate for Washington State Lt. Governor.  Davison Sattler provides her thoughts on Seattle’s Democrat power brokers and their commitment to failed homeless policies, how Republicans are tolerant and accepting, and what it will be like to campaign against the ultra-partisan Cyrus Habib in the race for Lt. Governor.

1) Why did you decide to run for Seattle City Council last year, especially taking on an incumbent who is part of the Seattle establishment?

As I said in my Shift op-ed, for these last many years my young children have been asking questions about what was going on around them in Seattle and I had to provide developmentally appropriate answers. The years of trying to explain to my kids what was happening in Seattle and the lack of adequate response to people in homelessness left me with but one answer: there was no adequate explanation for what the elected people were doing in Seattle.  When there was active talk by the elected people to start drug consumption sites in Seattle, I knew I could not sit by on the sideline any longer, so I contacted my council member.  I never got a response or even an acknowledgement of receipt of my message.  I was then compelled to do something to make a better future for my kids and their generation. I knew so many felt unheard like I did from talking to my neighbors, and this only increased the more I asked around.  I heard some variation of my story all around: people asking for help or answers from their elected leaders and hearing nothing from them.  It may be easier, and more comfortable and convenient to focus on my own life but what would I leave my kids with? That the best we can do is give up and accept the status quo?  Real change requires hard work and setting a better example for our kids; so, I say no work is too hard because our children are worth it.

2) In your op-ed that recently appeared in Shift you said the Democrat Party was not as “accepting and tolerant” as you expected.  What led you to this conclusion?

When I ran for Seattle City Council in 2019, I wanted to bring my neighbors’ voices to the forefront so they would no longer be ignored and neglected.  I had well-researched ideas that could have actually helped many of our problems, but instead of being welcomed into the conversation to discuss them, I was turned away at every chance by the established party powers–who are different than the average voter who considers themselves to be Democrat.  In knocking on the over 23,000 doors, I had people proclaim to be Democrats but that they could no longer believe these approaches to our problems were working.

I had a lot of support from Democrats as well as Republicans and independents in my race because what I was talking about resonated as a better approach to our societal problems then the way the Democrat party had been unsuccessfully addressing them for years.  Those power holders who believe they have no competition in this state would rather paint me as any number of things I don’t want to repeat here, rather than have a substantive discussion about the problems that we all share.  And that to me, is the opposite of acceptance, inclusion or tolerance.

3) You have since decided to join the Republican Party and you attended the Roanoke Conference.  What has surprised you most about the Republicans you have met?

What has surprised me the most is how accepting and tolerant the Republicans I have met have been.  I have been greeted with a lot of gratitude for speaking out about my experience as a regular person who, as a concerned mom without prior political aspirations, chose to put my life on hold and myself on the line.  People have thanked me for the inspiration to also stand up and speak out about what is obviously not working and to not let the fear of being shamed and labeled stop them.  People have gone out of their way to welcome me and even more have offered to help in any way they can. From seeing people at events after Roanoke, I can’t tell you how many in just the South Sound have offered to share their razor clams with me!

4) You have decided to take on Cyrus Habib and run for Washington State Lt. Governor.  What led you to this decision and how will you run the office differently than it is currently being run?

I think the Lieutenant Governor’s office is due for a different voice and perspective.  The incumbent Lieutenant Governor runs the office as a partisan player who seems to delight in political games. His duties require him to administer the office and help settle disputes but he has been so hyper-partisan that his predecessor, another Democrat even wrote a letter admonishing him for this behavior. I strongly believe that we need to bring all of the great ideas together from around our state to tackle our difficult problems, and we need someone at the helm who facilitates discussion and does not diminish it.  I am uniquely qualified to do just that.  I also want to make sure there is a voice at the state level that is relentless which says:  we do not want policies that have been shown to be ineffective and expensive regarding homelessness to become Washington’s policies.  I have lived in Seattle for 23 years and raise my children here, so I know the drastic changes that have occurred.  We cannot allow them to become Washington’s policies.

5) There are many differences between running as a Democrat versus running as a Republican in Washington State.  The primary difference is geography. A Democrat can spend most of their time driving up and down I-5 between Everett and Olympia to meet their voters while Republicans must travel the entire state. Have you made trips yet to the non-urban areas of the state? How are their concerns different than those in Seattle?

Yes, we had the pleasure of visiting Yakima, the Tri-Cities, and Mount Vernon so far. Our State is full of diverse needs, which we need to use to our advantage. We need a Lieutenant Governor who understands those diverse needs and that starts with someone who can and will listen to others. In Yakima, we met with fruit growers who care about being able to get their products to their buyers without spoiling. We also learned that Yakima has unique crime concerns that require state level help, but that its needs are often overlooked and put as a low priority by those in power in Olympia. The Tri-Cities is quickly growing and altogether is larger than Spokane or Vancouver; yet they also face neglect from Olympia because of the focus on the Everett to Olympia corridor. The underlying themes are that people want their voices heard and that they see Olympia recklessly spending their hard-earned tax dollars.  It is time for balance in our state and that means not only a balance of power but of attention to people and their needs too.