Seattle’s progressives use the coronavirus outbreak as an opportunity to push a Socialist political narrative and attack Amazon.

Governor Inslee should veto the plastic bag ban to reduce the spread of the coronavirus. The state legislature adopted SB 5323 to ban plastic groceries bags and make more people susceptible to the coronavirus via the increased use of reuseable grocery bags.  As a policy brief from the Washington Policy Center points out, “If a veto prevented one additional person from contracting the virus, it would be worth it. If the governor signs the ban and health authorities detect the virus on reusable bags this year, there will be – and should be – a political price to pay for the recklessness at a time when so many other, more difficult, steps are being taken.” (Washington Legislature Bill Summary and Washington Policy Center)

Climate activists state they were not pleased with the 2020 legislative session, mostly because the legislature failed to pass Governor Inslee’s expensive and ineffective Low Carbon Fuel Standard.  Activists also stated that, while passing greenhouse gas emission goals is noteworthy, the environmental community wants even more expensive programs – even though the programs they desire have previously only been successful in increasing the size and cost of government, and have dramatically failed to achieve greenhouse emission goals.  (KNKX and Shift)

Vice President Joe Biden’s lead over Senator Barry Sanders has grown to 21,000 votes in Washington’s Democrat Presidential Primary.  A week after the primary, and with less than 30,000 votes still to be processed, Biden has 37.8% of the vote while Sanders has 36.4%.  None of the other 11 candidates on the ballot reached the minimum 15% needed (Senator Elizabeth Warren has closest with 9.3%) to receive any of the 107 delegates Washington State will be sending to the Democrat’s national convention. (Washington Secretary of State)

Meanwhile… Seattle Councilmember Kshama Sawant’s Tax Amazon group blasted out an email using the coronavirus pandemic as an excuse to attack Amazon.  Sawant and fellow councilmember Tammy Morales say now is the time to place a tax on Amazon to pay for the city’s Covid–19 response and to continue the tax once the current crises is over to pay for “social housing” and yet unspecific “Green New Deal” programs. The far lefties on the council certainly don’t want to let this crisis go unexploited by their Socialist demands. (Tax Amazon email)

Many families new to home-schooling have organized to learn the best techniques for teaching their students.  Schools statewide are closed to combat the spread of the coroSocialist demands. (Tax Amazon emailnavirus, leaving many parents seeking advice from those who normally homeschool their children. Jen Garrison Stuber, the Advocacy Chair for the Washington Homeschool Organization Board, said “Our best advice, if you are planning to return when school reopens, is to do a lot of reading, writing and math together. Bake and cook together. Create art and music together. Look up hygge for ideas to make hunkering down in your house more fun. Write letters to distant relatives.” It is a good thing Washington State has a strong home-schooling community, with tens of thousands of students already taught via virtual learning, which is now able to pass on their its wisdom to others.  (News Tribune)

While ridership is down considerably on many forms of public transportation in the Puget Sound region, car traffic on state ferries is off only 10%.  This is due to the obvious factor that people can stay in their cars (and practice “social distancing”) while they commute across the water. (MyNorthwest)

The City of Edmonds has $50,000 burning a hole in its pocket, and city staff is looking to blow it on a trolley.  The city allocated the money to buy a trolley that it can run from May to October to bring people into the downtown shopping district.  Yet there are not many “open-air” trolleys available on the market. (Everett Herald)

Representative Tom Dent (R-Moses Lake) says the agricultural community needs to do a better job of telling its story, or its members can expect more difficult legislative sessions in the future. Rep. Dent explained that the environmental community spends considerable time proclaiming that “everything that farmers and ranchers do is wrong.  And they are painting us in a bad light.” Dent says more people involved in agriculture need to build relationships with legislative members from the West side of the state. (Washington AG Network) 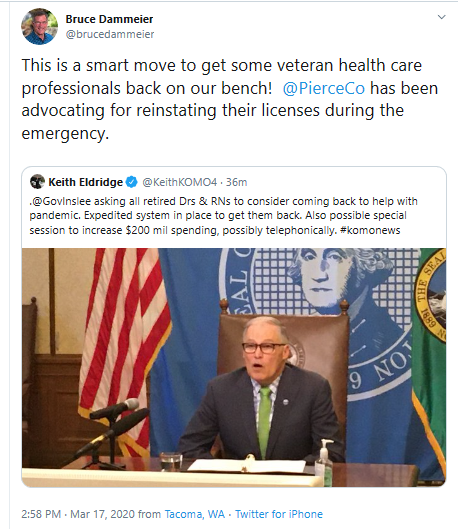 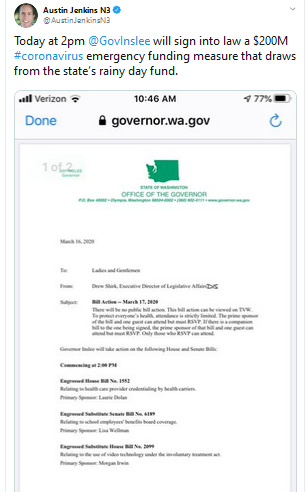