Help Shift ask Governor Jay Inslee some questions on the COVID-19 emergency orders – and other topics you care about – that perhaps he has avoided answering so far.

During the coronavirus outbreak, Governor Inslee has isolated himself inside a safe cocoon with his staff and campaign supporters.  At a time when Washington needs a true leader who brings together the state to fight towards a common goal, the governor has decided instead to play divisive politics that often only benefits his supporters.  And, perhaps worst of all, the governor has felt it unnecessary to answer the many questions and concerns of Washington citizens and Republican lawmakers (if he does respond, it is nearly always with a sound bite that doesn’t answer the question).  Shift wants to make it easy for the governor to answer the most pressing questions of Washington residents.  We will collect questions from our readers and select the top dozen inquiries and send them to the governor and his press team.  If the governor responds, we will post his answers in full and unedited.  If you have a question for Governor Inslee, send it to [email protected].  (Shift and Q13’s The Divide)

State Senator Ann Rivers (R-La Center) says she has learned that the theft of funds from the state’s Employment Security Department (ESD) is larger than previously suspected.  From her office’s contact with ESD employees, the senator has learned that, “Nearly $1 billion has been lost to Nigeria and other fraudsters.” Senator Rivers went on to say that not only is the Governor Inslee and his administration responsible for the lost funds, but Democrat House members killed a bill (which passed the Senate unanimously) that could have prevented this historic robbery.  Senator Rivers worked on the Data Privacy Bill which would have instituted measures that would have better protected state funds yet, “partisan breakdown in the House is what killed this bill.”  Senator Rivers is among the many legislators who is asking Governor Inslee to fire ESD Commissioner Suzi LeVine for her demonstrated incompetence.  Thus far Governor Inslee has demonstrated that the hundreds of thousands of dollars LeVine can raise for Democrat campaigns is more important than the hundreds of millions of dollars she has cost Washington taxpayers.  (Lacamas Magazine)

Governor Inslee likes to pick economic winners and losers, and his decision to limit medical treatment and procedures during the coronavirus outbreak has dramatically impacted the financial resources of health care facilities across the state.  As a result, UW Medicine expects to lose $500 million by the end of the summer and has furloughed 5,500 employees.  Patients are worried that their health care will suffer due to the reduced staff and programs that Inslee wants to see.  (Seattle Times)

While the nation is dealing with the tragic death of George Floyd at the hands of Minneapolis police officers, Tacoma officials are dealing with a more complicated death of a black man during his encounter with police officers on March 3rd.  Much of what took place before Manuel Ellis’ death may not ever be known, since Tacoma police officers do not wear body cameras.  Body cameras are a smart tool that allows the public to learn what exactly takes place during stressful situations and can also protect innocent police officers from hyperbolic public criticism. (Tacoma News Tribune)

The Vancouver Columbian has apologized for a cartoon published in Wednesday’s newspaper.   The cartoon depicted people of color as looters during the recent riots/demonstrations that have taken place after the death of George Floyd.  The newspaper’s editor said the point of the cartoon was that looting will not “advance discussions about race and police brutality.” Yet the paper received many complaints, which the editor characterized as “at best it was insensitive and at worst it was racist.” The paper has removed the cartoon from their website and issued an apology. (The Columbian)

Sound Transit officials say they expect to lose at least a billion dollars in tax revenue during 2020 and 2021 due to the coronavirus pandemic. There will also be a reduction in passenger fare payments due to job losses and more transit commuters adapting to working remotely from home (or being concerned with riding with possibly infected people). The agency expects to lose up to $12 billion from projected revenue figures over the next 20 years.  Sound Transit is considering seeking more loans to continue its construction schedule, but this would require approval of the voters.  More likely, there will be delays in the construction schedule and a reduction in the “features” built into the system. Or, the terminally under-performing transit system will just go over-budget and ask Democrat officials for more protection from its own incompetence. (RT&S)

Socialist City Councilmember Kshama Sawant is doing her usual Sawant things, shouting out frivolous and baseless claims, this time that it was the Seattle Police who caused the riot and destruction of property.  The councilmember has sunk to a new low in promoting her typical attacks on police officers, though this fabrication runs counter to the video evidence of the riots.  Once again Sawant has demonstrated she is more concerned with pushing her selfish and extreme political ideology than in helping the citizens she was elected to serve. (MyNorthwest)

Governor Inslee’s legal team failed to convince a judge to move a lawsuit against him from its current Central Washington venue to Thurston County.  A few dozen elected officials, business owners, and residents from the Wenatchee/East Wenatchee area have filed a lawsuit over the legality of Governor Inslee’s emergency orders, which have used Seattle-area statistics to keep businesses in Central Washington closed.  Lawyers from the Washington State Attorney General’s office attempted to move the case to the more Inslee-friendly Thurston County, but Chelan County Superior Court Judge Kristin Ferrera denied the motion. (Wenatchee World)

Yakima County continues to be the hardest hit region in the state for the coronavirus.  Health officials say the transmission rate is still between 2 to 2.5 (meaning each infected person transmits it to an average of more than 2 other people). The infection rate needs to be below 1 before the county can move to Phase II and begin to reopen businesses.  Yakima health officials have issued a directive asking people to wear masks in public. (Yakima Herald)

In an email blast to his supporters, Jay Inslee stated, “We have much more to do to root out systemic inequality in our society. While we continue to prevent and confront the deaths of Black people by law enforcement, we must also address inequities for Black Americans in education, in healthcare, in housing, and in the reaction to COVID-19.” In Washington State, Democrats have controlled the Governor’s mansion since 1985 and have controlled both legislative chambers for most of this time. The liberals have also controlled the supposedly “non-partisan” Superintendent of Public Instruction position for even longer. A Democrat has been the King County Executive since 1993, and the party has held a Council majority for the past couple decades.  Liberals have controlled the Seattle City Council and Mayor’s office and the Seattle School Board since the 1970’s.  With this amount of control over all levels of government, why haven’t the Democrats done a better job of eliminating the inequality that Governor Inslee sees as systemic in our state?  One might suspect the Democrats would rather perpetuate the inequality (for their own political benefit) than actually work to solve the problem. (Inslee Campaign email) 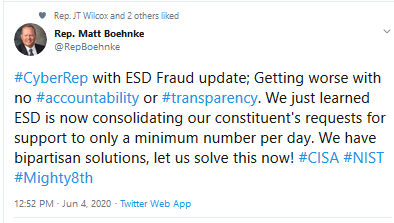 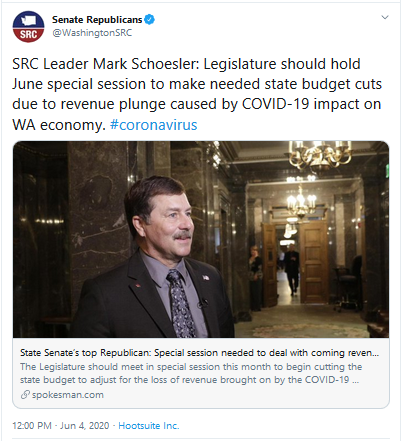