While Governor Inslee will want to focus on just COVID deaths, data reveals 50% more fatalities occurred due to government restrictions.

In the first of a two-part series, Shift takes a look at a few of the many failures of the Inslee Administration during the 16 months of the pandemic – many of which resulted in the unnecessary spread of the virus.  From COVID-19 outbreaks occurring in nearly every state-run residential facility (prisons and hospitals), to a poorly planned and implemented immunization program which lagged far behind nearly all other states during the critical initial weeks last December and January, the state reacted poorly at nearly every stage of the pandemic. Governor Inslee has no one to blame but himself for the state’s poor performance, since he stubbornly refused to allow local officials and legislators to have any input on decisions which impacted millions of Washington State residents. (Click to read full Shift Article)

Democrats are suddenly calling for reform of the Washington State Public Disclosure Commission now that they are being fined (still at a far lower level than Republicans) for their many campaign violations.  Democrats “weaponized” the PDC in the early 2000’s in the hope that they would go after Republican candidates and organizations.  Yet conservative activists have turned the tables on the Democrats by filing complaints for their many violations of state campaign finance laws. Democrat politicians don’t like being held accountable for their actions and are now seeking to (again) “reform” state campaign finance laws, with some even calling for taxpayer funding for all campaigns (similar to the ineffective yet expensive “Democracy Voucher” program in Seattle). Thus, just another example of how Washington Democrats want to impose failing Seattle policies onto the rest of the state. (Click to read full Shift Article)

Research by the Washington Policy Center shows that for “every two COVID-related deaths, there was an additional death caused by COVID-related restrictions” in Washington State.  Utilizing fatality averages over the past few years, data shows Washington State had an excess of 8,501 deaths during 2020 and the first part of 2021.  The CDC reports that 5,765 of these deaths were COVID related.  Thus, the state had 2,736 more deaths than usual that were not caused by COVID-19 during this time. These deaths should not be ignored by the governor or the media, for many of them were likely related to actions taken by the state.  Also, as Governor Inslee touts the state’s low COVID mortality rate, even he admits this is due more to individual decisions than his (and other state) actions.  The Governor was often slow to implement safety measures, even while his state agencies failed miserably in its testing, contact tracing, and immunization programs.  We should also add that, since science shows that COVID was more fatal to older and less healthy individuals, the state’s young population (especially in urban areas where the virus elsewhere spread the most) combined with the third lowest smoking rate in the country (behind only Utah and California) played a significant role in preventing deaths from the respiratory virus regardless of any state actions.  (Washington Policy Center and Centers for Disease Control)

The Washington Observer reports that one of Governor Inslee’s wealthy contributors and her pet projects did very well during the 2021 legislative session. Last year, Lisa Mennet contributed $250,000 to the Washington State Democrat Party (which then flowed through to Governor Inslee’s campaign coffers), making her the top individual donor to any Washington State political entity.  She also happens to be the founder of the Perigee Fund, which was the major driver behind the passage of the Fair Start For Kids Act, the state’s massive expansion of taxpayer-subsidized childcare.  We should note that Mennet has also been a major supporter of the unconstitutional state income tax on capital gains which also passed during the last session (and is now requiring the state to defend multiple lawsuits).  Mennet claims the tax is needed to make the state’s tax structure more equitable, yet fails to say what revenue sources which negatively impact the poor the most (like the state lottery) should be eliminated.  In a 2019 Seattle Times op-ed, Mennet wrote that the capital gains tax should be implemented to force “households like ours to pay more.”  As we have said to Nick Hanauer and other ultra-wealthy liberals who push for higher taxes, there is nothing stopping them from sending more of their money to the state.  In fact the state has an easy-to-complete form to do exactly that. Well, what are you waiting for Lisa and Nick? (Washington Observer, Seattle Times, and Washington State Department of Revenue)

Puget Sound area transit systems will return to allowing full capacity (though that rarely happens on any Sound Transit train) as state restrictions have (FINALLY) been lifted. Federal mask mandates for transit riders will stay in place through September, and passengers must maintain six feet between themselves and the driver.   As society returns to relative normal, transit ridership will be one of the more interesting statistics to follow, as many workers now have the option to work full or part-time from home.  Bigger government transit authorities are certainly hoping everyone returns to their previous commuting habits so they can continue to draw large salaries to spend public dollars frivolously and irresponsibly on large transit projects (which always go over budget). (Seattle Times)

Where is the outrage among the city’s elected officials after Seattle’s seventh murder during June occurred Monday night on Alki Beach?  One person died, and three more were wounded, from gunfire following a dispute between two groups.  The sad fact is that violent crime continues to escalate in Seattle as ultra-liberal city officials attempt to ignore the dismal reality of their hastily implemented “defunding the police” measures that were passed to placate the violent liberal rioters last summer.  Liberal officials even try to attempt to divert attention away from their failed policies by claiming guns are responsible for the murder increase, ignoring the fact that guns were available previously, and violent crime was not skyrocketing like it is this year. (Seattle Times)

Seattle Times columnist Danny Westneat reports that it was evident by the responses at a recent Seattle mayoral candidate forum that “defunding the police is on the run.”  Westneat said that the six candidates in attendance all expressed the need to increase the size of the police budget.  Yet observers of Seattle politics remember that several Seattle city councilmembers had promised to increase police funding during their campaigns in 2019, only to cave into the demands of liberal rioters to defund the police department last summer.  (Seattle Times)

An independent investigator has determined that “unnecessary” negative comments about a new Spokane police officer which were made by a city councilmember did not rise to the level of bullying or harassment.  Last December, Spokane Councilmember Kate Burke wrote on Facebook that new Spokane Police Officer Jared Keller had a “horrible police record and makes our BIPOC families feel more unsafe.” The evidence the councilmember had for making this statement was a 2018 incident that occurred when Keller was a police officer in Seattle.  The City of Seattle Office of Police Accountability cleared Keller of all charges after he shot and killed an individual who was pulled over for a traffic violation, as authorities determined there was sufficient evidence the suspect was reaching for a gun. The Spokane Police Guild filed a harassment charge against Councilmember Burke, but the investigator determined that there was no evidence that Officer Keller felt he was harassed or bullied by the comment, even if it was an unsubstantiated one.  (Spokesman-Review)

Is it happenstance that Governor Inslee’s taxpayer-funded media tour is coinciding with his campaign’s latest fundraising efforts?  As the governor motors around the state in his taxpayer-funded jet and unnecessarily large taxpayer-funded SUV, his campaign consultants pump out fundraising emails seeking to fill his campaign coffers once again.  The 70-year-old governor is unlikely to be thinking of running for a fourth term.  If he can con people out of their cash, the money will likely be spent attempting to defeat legislators (both Democrat and Republican) who fail to agree 100% with the governor about supporting his friends in the government employee unions and extreme environmental groups.  Or, maybe, it could just be a method for liberal campaign consultants to get paid for doing very little work. (Inslee Campaign email) 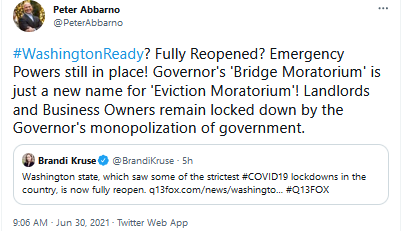 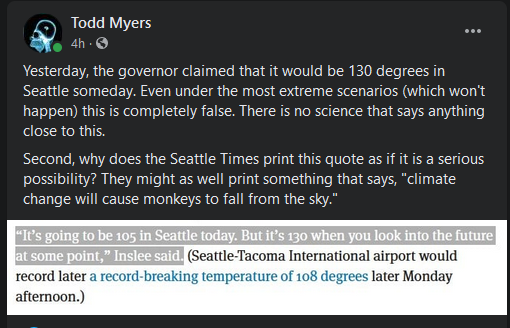