Governor Inslee steps out of his self-created liberal isolation in the Governor’s mansion and is booed and heckled in the Tri-Cities.

Washington Governor Jay Inslee was heckled off the stage when he spoke Tuesday morning in Pasco. The governor, who has lost credibility among many Washington residents due to his partisan actions and poor management during the largest health and economic crisis in the state’s history, was booed and heckled as he attempted to speak on the importance of wearing face masks.  How did Inslee earn this scorn?  The governor has ignored numerous letters from Republican lawmakers and never consults with legislative leaders on issues that impact millions of citizens. He has disbanded bipartisan legislative workgroups in favor of advisory committees made up solely of campaign contributors, liberal special interest groups, and government workers.  He has given his campaign contributors in the state employee unions a pay raise while millions of Washington residents are facing financial insecurity. And this list of malfeasance doesn’t  even include his state agency scandals in Corrections, Employment Security, and DSHS. Inslee’s selfish and partisan actions have tarnished the governor’s office and a growing number of Washington residents no longer find his staff-written statements convincing. (Seattle P-I, Shift, and Governor Inslee media release)

Even more problems due to the Inslee Administration’s mismanagement of the Employment Security Department (ESD). The poorly run state agency, under Jay Inslee’s hand-picked fundraiser in charge, announced that it will likely run out of funds and may need to borrow money from the federal government to make future unemployment benefit payments.  After it was revealed the ESD was successfully scammed out of “hundreds of millions of dollars” (one of the largest heists in American history) by a Nigerian crime ring, the Inslee Administration scoffed at those who said the department could run out of money.  As is often the case, Inslee’s critics were correct and the governor’s diversionary tactics were unable to alter reality.  (KUOW, and Washington Policy Center)

The Roanoke Conference is holding a special Webinar event titled, “Why America is Great.” A Thursday, July 2ndprogram will be hosted by Michael Medved and will feature Ligia Brubaker, who grew up in communist Eastern Europe, and Hossain Khorram, who immigrated from Iran.  The event is free and runs from 5:30 PM to 6:30 PM.  You will need to register (click here) to attend. (Roanoke Conference Webinar Event)

One of the primary reasons why Democrat lawmakers are interested in passing a capital gains tax is their belief that it could open the door to a full-fledged state income tax, which is the holy grail for Washington liberals (for it opens up a lucrative revenue stream for even more state spending). Yet the legal problem for capital gains income tax advocates is that the tax is considered an income tax by ALL other states and the Internal Revenue Service, and thus should not be allowed by the Washington State constitution. Not only is a capital gains income tax unconstitutional, but Washington voters have struck down six separate attempts by liberals to amend the state’s constitution to impose an income tax. (Washington Policy Center)

Seattle Mayor Jenny Durkan has sent a letter to the Seattle City Council requesting that it investigate City Councilmember Kshama Sawant. Mayor Durkan contends Sawant violates laws and “recklessly undermines the safety of others, all for political theater.” Durkan cited Sawant opening the doors of Seattle City Hall to protestors, encouraging the takeover of the police department’s East Precinct, and led protestors to the mayor’s home, despite her address being protected since her time as U.S. Attorney.  This move by Durkan could force the state’s liberal elite, from politicians, campaign consultants and organizations to take sides for or against the socialist Sawant.  While Republican lawmakers are often forced to take sides against far-right individuals (and risk losing support from those who are sympathetic), Democrats are nearly always given a pass by the media by not being asked to comment on the destructive actions of far left activists.  It will be interesting to see if reporters follow up on Durkan’s letter by asking Senator Patty Murray, Senator Maria Cantwell, Governor Jay Inslee, Attorney General Bob Ferguson, and Washington State Democrat Party Chair Tina Podlodowski if they stand with Mayor Durkan or Councilmember Sawant in this dispute. (KIRO7 News)

After numerous acts of violence within the CHAZ, City of Seattle workers finally started taking down concrete barriers that stopped vehicular traffic from going through the 6-block zone. Yet, as soon as the concrete barriers were removed, the protestors replaced them with sofas and garbage cans. It is believed the few remaining protestors will concentrate their efforts to construct a lawless perimeter around the abandoned East Precinct. Seattle Police leaders have stated they will return to the building, but have yet to provide a timeline. (Seattle Times)

The Seattle School Board continues to be more concerned about political activism than in providing education for its students. Despite the Seattle schools failing to be prepared to educate kids during the coronavirus outbreak, due to its adherence to the progressive “equity” political narrative, the board does not appear to be altering its hapless liberal-based mission. The board is now focusing its attention on renaming a school after an undetermined LGBTQ+ individual.  Shouldn’t the school board be spending its limited resources on developing policies for educating its students, especially after its disastrous failure in remote education (when administrators simply gave up and gave all students straight A’s, regardless if they did the assignments)? (Seattle Times)

Popular Tacoma waterfront restaurant C.I. Shenanigans is permanently closing. The eatery closed its doors in March, at the beginning of the coronavirus outbreak and has decided not to renew its lease.  Even though the timing of the closure makes it appear COVID-19 related, the owners have not provided a reason why it will not continue operation. (News Tribune)

Normally left-of-center talk show host Dave Ross writes how “knuckleheads” have taken over Seattle and are endangering the health and safety of Seattle citizens. Ross, who ran for Congress as a Democrat, writes about the foolish individuals who have taken over the Black Lives Matter protests and are forcing the daily closure of I-5 and other Seattle roadways.  As people are becomIng more concerned about their safety and access to emergency services, they are becoming less sympathetic to the protestors’ message as they become angrier at their illegal actions. (Dave Ross on MyNorthwest)

A Walla Walla police officer’s tattoo, meant to commemorate a fallen military comrade, is the reason why the president of Whitman College has severed the school’s relationship with the police force. The “SS” lightening bolt tattoo is meant to symbolize “scout sniper,” yet for some people it reminds them of a Nazi symbol.  Walla Walla police Chief Scott Bieber said he regrets the college decision to no longer allow officers to use school facilities for training and is hopeful three upcoming virtual town meetings can resolve the issue. (Elkhorn Media Group)

Yakima County health officials believe the drive to encourage people to wear face masks is the reason for the continued decline in coronavirus cases in the county. For the second day in a row, there were fewer than 100 new cases of the disease. Yet the south end of Central Washington remains the region of the state with the highest percentage of per capita new cases.  (Yakima Herald)

Washington State University President Kirk Schulz will be taking a 10% pay reduction next year. As opposed to Governor Inslee, who will stubbornly keep a $5,000+ pay raise starting tomorrow, Schulz is demonstrating real leadership by voluntarily taking the pay cut and foregoing a $50,000 retention bonus, as he leads the university through a tough financial period.  The chair of the school’s board of regents said, “Everyone within the university will have to share in the pain of the difficult financial situation brought on by COVID-19, but President Schulz has led the way with his voluntary reduction in salary and other contractual benefits.” (Spokesman Review) 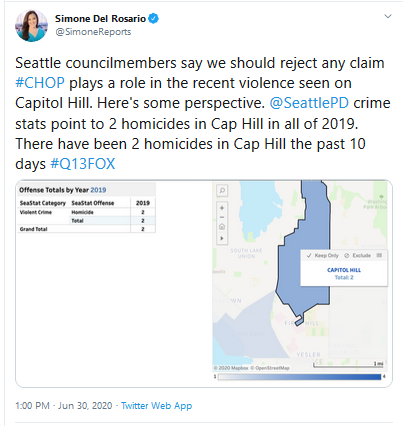 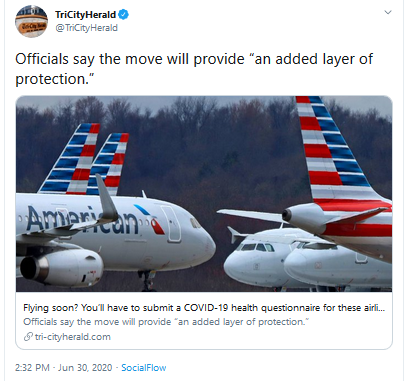