The managerial failures of Governor Jay Inslee’s Department of Corrections (DOC) just cost state taxpayers another $3.25 million, with more lawsuits on the way.  The family of a Monroe Corrections Complex inmate received the financial settlement due to negligent medical care which resulted in the prisoner’s death.  Governor Inslee’s handpicked medical supervisor at the prison, Dr. Julia Barnett, was later relieved of her position and has since had her medical license suspended by the Washington Medical Commission due her performance falling “below the standard of care for six patients, four of whom died.”  This tragic administrative failure is now the cause of multiple lawsuits, including one filed in April for $10 million, due to the death of an inmate who failed to receive care for his cancer.  To great fanfare in 2014, Governor Inslee placed a moratorium on carrying out executions in Washington State to those sentenced by juries with the death penalty. Yet since then, media reports reveal that there have been seven inmate deaths caused by medical administrative failures.  During the COVID pandemic, at least another seven inmates have died due to the DOC failing to adhere to safety guidelines.  Thus, while a convicted murderer can no longer be executed in Washington State, those convicted of lesser crimes have received a fatal sentence due to institutional medical incompetence. But Jay Inslee doesn’t talk about that death sentence much.  (Seattle Times, Washington Medical Commission, Governor Inslee media release, Seattle Times, and KHQ)

Oral arguments in the lawsuit claiming Governor Inslee illegally used his veto powers – in 2019 – will finally be heard by the Washington State Supreme Court next Tuesday morning.  The case, Washington State Legislature v. The Honorable Jay Inslee, is the result of legislators asserting that the governor overstepped his authority when he vetoed selected sentences within the transportation budget passed by the 2019 legislature.  Both Republican and Democrat legislators voted unanimously to file the lawsuit. Current legislative leaders are planning to file a similar lawsuit regarding Governor Inslee’s latest questionable use of his veto power, when he struck down language in his climate bills (HB 1091 and SB 5126) which linked their implementation to the future passage of a transportation funding package. This negotiated language was necessary to obtain the votes needed to pass the climate bills in the State Senate.  (TVW, House Republican Caucus, Democrat House Caucus media release, and Washington Legislature Bill Summary)

The U.S. Department of Labor (DOL) Inspector General has issued an audit report detailing how some states (chief among them Washington) were woefully unprepared to handle the onslaught of unemployment benefit claims brought on by the COVID-19 pandemic.  The report fails to provide specific problems in each of the 12 states examined, but does provide general recommendations for the federal government and states to adhere to in the future.  Oddly, not among the recommendations is selecting competent administrators to lead the department responsible for fulfilling the claims. Governor Inslee went the other way with his selection (Suzi LeVine) to lead Washington State’s Employment Security Department, as her primary qualification was that she raised millions of dollars for Democrat political candidates.  Yet, it is understandable that the Inspector General did not provide this advice since one of President Biden’s first appointees to the DOL was the eminently unqualified Ms. LeVine, the political fundraiser who was responsible for losing more than $650 million to foreign criminals when in this Washington.  (U.S. Department of Labor Inspector General audit report and MSN/Washington Examiner)

As Washington State officials continue to ignore science in their random COVID-19 health and safety guidelines, all table condiments in Washington State eateries must be single serving only and thrown out after each customer.  This expensive state-imposed requirement was never based on science, but is the result of initial fears that COVID-19 could be spread through touch. While science has disproved this fear, this requirement and many similar restrictions (like disposable menus and ubiquitous hand sanitizer) are still enforced on Washington State’s hard-hit hospitality industry.  (The Inlander)

Due to the City of Seattle’s liberal criminal justice system, the once Most Livable City in America has now become a place where criminals can kick a dog to death and force a man into a wheelchair, and still be set free to attack again.  The latest high-profile random attack occurred on Saturday evening, near Seattle City Hall (appropriately), as the suspect first sought to rob the victim who was walking his dog.  After the suspect was repelled by pepper spray, he rushed back and attacked the 67-year-old victim and kicked his small 14-year-old dog to death.  The loss of his longtime companion is heartbreaking for the victim.  On Tuesday, King County Superior Court Judge Marcus Naylor refused the recommendations of the police department and set the man free with no bail.  (Q13 News)

King County Councilmember Reagan Dunn stated that liberal programs, like Universal Basic Income (UBI), create the dependency on government which liberals want.  Dunn’s liberal colleague on the council Dave Upthegrove has proposed a study of UBI (where everybody receives a check from the government), which Dunn argues is already rigged before it begins. “That study (will) be highly biased and (will) come back with ‘it’s all rainbows and unicorns, and we’re going to fund this thing countywide.’”  Dunn stated that the region is experiencing the same sort of unproductive government dependency today, with all the extra federal money which unemployed workers are receiving in benefits leaving many open jobs unfilled.  (MyNorthwest and King County Council media release)

The Grant County Public Utility District PUD) has signed a deal to explore the possible construction of a small nuclear reactor to provide power for its customers.  The deal was signed with NuScale Power, and is at the beginning stage with no location or timeline in place.  The PUD has a history of being self-sufficient in its power needs for its 100,000 residents thanks to its two Columbia River dams (Wanupum and Priest Rapids), and two smaller hydroelectric projects, as well as part of a windfarm near Kennewick.  (KUOW/NPR)

The Walla Walla City Council announced that it will resume in-person meetings with a limit of 30 people in the audience. Next Monday’s council work session will be the first non-virtual meeting since March of last year.   (Walla Walla Union Bulletin)

Data proves the 2021 legislative session was the most partisan and divisive in Washington State history.  While the liberal media fawns over the unnecessary taxes and expensive energy policies that passed (and which will hurt low-income workers the hardest), voting data shows that narrowminded urban Democrats felt no need to listen to the thoughts and concerns of those with different perspectives, as they imposed failed Seattle-style policies on the rest of the state.  In the Senate alone there were 24 bills passed along party lines this session. As soon as the Democrats had enough partisan votes in both legislative chambers, “all negotiation and any thoughts of talking to the Republicans went out the window. Gone was reasonable discussion.” (Click to read full Shift Article) 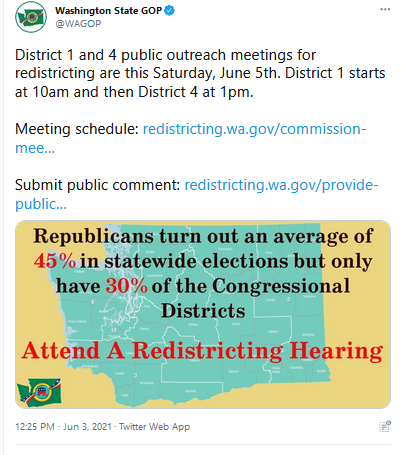 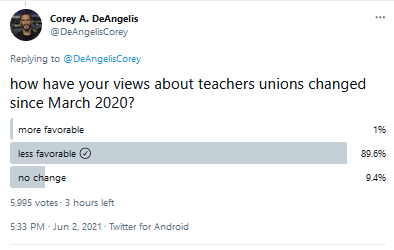