Washington State Lt. Governor Cyrus Habib admits on Twitter he tells other Democrats to not talk with one of the few journalists willing to ask tough questions. Habib, while responding to a tweet about Q13 reporter Brandi Kruse, confessed that “I’ve encouraged elected officials not to interact with her because of how partisan and unprofessional she has been.” Kruse, who has built a reputation for holding all elected officials, off all political viewpoints, accountable by asking tough questions. Kruse is being singled out by the Lt. Governor because she rightfully asked Governor Jay Inslee questions about the motivations behind his coronavirus outbreak policy decisions (remember, the governor is not responding to letters from Republican legislators or phone calls from mayors and has COVID-19 response advisory committees made up solely of campaign supporters, government employees, and liberal special interest groups). Since Habib is, blessedly, not running for re-election, he is allowing his extreme-left feelings about the freedom of the press to emerge – if a reporter questions the authority of a Democrat politician, they need to be banned!  (Habib Twitter,  Q13’s The Divide, Shift, and News Tribune)

The Washington State Economic and Revenue Forecast Council released its Economic Forecast and the COVID-19 outbreak has had an even greater negative impact on the state’s revenue than previously reported.  For the past few weeks Washington State officials have been saying the economic shutdown will cost the state $7 billion in revenue over the next three years.  The latest forecast projects that the state will lose nearly $9 billion in revenue ($4.6 billion during the current budget through next June, and $4.4 billion during the 2021-2023 biennia).   (Washington State Economic and Revenue Forecast Council)

Governor Inslee proposes eliminating a scheduled 3% pay raise for some management and the few non-union state employees, while still giving a second pay raise to union employees (though having them take a few unpaid days off to maintain current payroll expenditures next year).  After the pay raise is implemented, union employees will take one day off per week for four weeks, then take one day off during each of the next three or four months.  Why would the governor use a complicated method to maintain current payroll expenditures?  By allowing the pay raise, employees increase their base salary which current benefits and future pay raises are based on.  While this furlough method will save some money during the current budget cycle, it will not reduce future state expenditures (including in the 2021-2023 biennial budget, which is projected to have revenues $4.4 billion dollars smaller than previously projected). Also, remember that while private sector wages have been severely impacted by the economic shutdown, nearly all state employees have received full wages and benefits during the crisis. (Seattle Times)

Former Seattle Mayor Mike McGinn supports having contract negotiations between current mayor Jenny Durkan and the Seattle Police Officer Guild be open to the public. In a tweet, McGinn called for this transparency to ensure police reforms are not being “bargained away.” No matter the reason, it is good to see those on the left finally agree that contract negotiations between elected officials and government employee unions should be open to the public.  As last November’s election in Spokane demonstrated (Proposition 1 passed with over 80% of the vote), the public overwhelming supports more transparency and fewer backroom deals between liberal politicians and their campaign contributors in the public unions. (BTW – It is interesting that Mike McGinn still has the Twitter handle “@MayorMcGinn” six years after losing his re-election.) (Twitter and KHQ)

In the latest Seattle City Council proposal that will encourage employers to locate more  employees outside of the city, Councilmember Teresa Mosqueda revealed her plan to tax companies for employees with annual salaries over $150,000.  While other communities are providing incentives for companies to locate in their cities because of the tax revenue they will create  (Virginia provided $573 million in incentives for Amazon to create 25,000 new jobs – nearly $23,000 per employee), the City of Seattle appears hell-bent on driving away the many (along with their tax revenue) to collect taxes from the few. (Seattle Times and Wikipedia)

The Centers for Disease Control and Prevention is encouraging people to drive alone in their car instead of using mass transit and carpooling, to help reduce the spread of the coronavirus.  We wonder if this will have an impact on the City of Seattle and its growing list of anti-car policies. (KUOW)

The Tacoma News Tribune posted a video of the Tacoma Youth Symphony virtually performing Mendelssohn’s Symphony No. 5, IV.  Over the past few months, it has rarely been a pleasure to read the overwhelming amount of crisis coverage in newspapers across Washington.  But this morning we found this little gem.  A nice mixture of a 200-year-old arrangement and modern technology. Well done by the students and the techies who put this together! (News Tribune)

The cruelty of the dysfunction in Governor Inslee’s Employment Security Department (ESD) is revealed in the story of a Spokane Valley mother who repeatedly calls the ESD, sometimes over 200 times a day, but has yet to resolve ESD’s mistakes.  Hotel worker Emily Young was receiving benefits until a couple of months ago when she was cut-off with no explanation. Since then she has repeatedly attempted to contact ESD both via the phone and the website. (KHQ – TV)

Chelan-Douglas isolation centers will now become housing for agriculture workers.  Like many communities, the Wenatchee area invested in locations to provide shelter for those infected with the coronavirus. And like in many places, fortunately these facilities have been underused.  Agriculture workers have had a high infection rate which many blame on close-living quarters. The emergency shelters will now accept agriculture workers to improve social distancing. (Wenatchee World)

Apple growers are challenging U.S. Department of Agriculture data that determined apple prices had not fallen enough (more than 5%) for growers to receive financial assistance from the Coronavirus Food Assistance Program.  The growers contend they have data which proves apple prices have dropped from between 6.5% – 24.9% due to the coronavirus. (Washington AG Network) 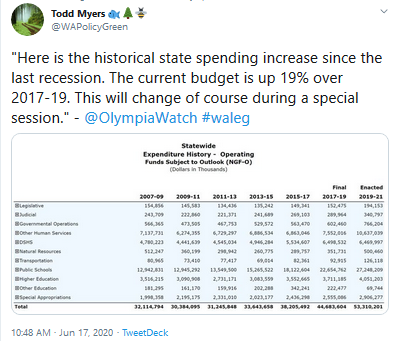 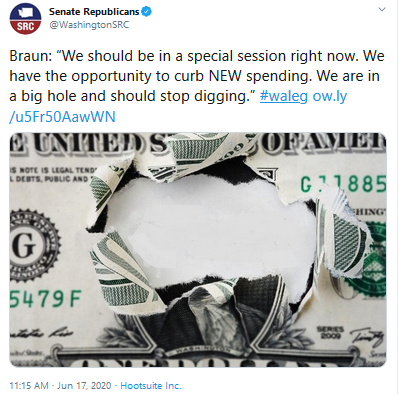