Governor Jay Inslee and Democrat legislators will likely ignore yet another state newspaper calling for a June special session of the legislature – because they can.

The Centralia Daily Chronicle is the latest state newspaper to call for an immediate legislative special session. The paper noted that many budget increases (including a second pay raise in 12 months for state employees) will go into effect on July 1st, and the legislature needs to curb these expenses to stop spending money the state does not have. The Chronicle points out that Governor Inslee and the Democrats have chosen to play partisan politics instead of solving the state’s financial difficulties. The paper states, “members of the Senate and House Republican caucuses have been trying since May to bring the legislature back for a special session, but so far have been unable to secure the cooperation of Democratic caucuses or Inslee.” The state’s official revenue forecast will be released on Wednesday, and the projected three-year revenue shortfall is expected to be larger than the previous estimate of $7 billion. (Centralia Daily Chronicle)

Former Attorney General Rob McKenna joined with Tacoma Attorney Salvador A. Mungia in writing an op-ed detailing the importance of funding legal aid assistance for at-risk individuals.  Their article points out that the impact of the COVID-19 economic shutdown (and the terrible response from the Inslee Administration in delivering promised unemployment benefits) will impact those who are low-income, with disabilities, and people of color the hardest, as they will face evictions, bankruptcy, and an increase in domestic violence. (News Tribune)

Republican members of Washington’s congressional delegation sent a letter to Employment Security Department Commissioner Suzi LeVine stating that they have received many requests from constituents asking for assistance in obtaining promised benefits from the state.  The letter describes how some individuals have tried reaching ESD over a thousand times and still cannot talk with a live person.  Representatives Herrera Beutler, McMorris Rodgers, and Newhouse, are federal officials and thus unable to assist directly with state agency problems. (GOP Delegation Letter)

As predicted, the 2019 Washington State Legislature’s passage of the highest Real Estate Excise Tax (REET) in the country is having a negative impact on property investment in the Puget Sound region.  Recently released figures show that investment has dropped nearly 65% – from $5.4 billion during the first four months of 2019 to $2 billion for the same period in 2020.  The COVID-19 outbreak has been partially responsible for the drop-off, but the figures were considerably down during the first couple of months before the economy was shut down.  Because of the reduced number of transactions, local governments will experience a decline in their revenue from their portion of the tax. (Connect Media)

Candidate for Superintendent of Public Instruction Maia Espinosa released her Voter’s Guide video in which she is critical of controversial incumbent Chris Reykdal.  Espinosa stated that Reykdal “championed a policy that teaches sexual positions to 4th graders, while nearly half of our students are failing core subjects.” (Espinosa video on YouTube)

A small auto repair business just outside the Capitol Hill Autonomous Zone was denied police assistance while the being attacked by individuals robbing and setting fire to the establishment.  In yet another concern for Seattle employers, the Seattle City Council has determined that police should not provide protection to business in the area even though they pay taxes which fund such services.  Prospective business owners and investors are becoming more and more aware of the risks of creating jobs in Seattle.  The short-sighted and knee-jerk reactions of city officials will likely have long-term impacts on job creation and tax revenues. (Washington Policy Center and KIRO-TV)

State Senator Steve O’Ban (R-Pierce County), responding to the recent protests in an op-ed posted over the weekend, called for the country to “Choose words of healing, humility, dignity, and charity as you discuss these difficult topics with family, friends, co-workers.”  O’Ban (who was Shift’s Newsmaker Interview last Friday) said it was “sickening” to view the images of the officer kneeling on the neck of George Floyd.  O’Ban quoted President Abraham Lincoln when he concluded, “Let’s choose words and actions of ‘charity for all, and malice towards none,’” as we move forward to solve important issues. (The Suburban Times and Shift)

Seattle City Councilmember Kshama Sawant and her followers are attempting to drive a wedge between police officer guilds and organized labor.  In a column written by a Sawant staffer, he incorrectly states that law enforcement’s “job, under capitalism, is to serve as an armed, legally-sanctioned force acting on behalf of economic and political elites. In doing so, they are arrayed against other union members, and indeed the entire working class. That is not a union; it is a protectorate of the elite.” We wonder what Team Sawant’s description of law enforcement is under socialist utopias such as Venezuela, Cuba, and China.  It will be interesting to watch organized labor’s reaction to this direct attack on their fellow union members, as some want to follow Sawant’s lead in kicking the police out of the labor community.  This could become a significant divide in the local progressive movement. (Crosscut)

State Senator Joe Nguyen calls for yet another division in the local progressive movement.  In a rambling article spouting slogans and extreme viewpoints, the underwhelming Nguyen argues that to remove inequality another inequality must be created.  Nguyen believes people with experience should be denied equal access to political positions when he states, “longtime elected officials should consider stepping down and creating space for the next generation of leadership.” (It is interesting Nguyen does not define “longtime” or how soon he will fit into that category.) Another thing that is interesting to note about Senator Nguyen is that on his official state bio he brags about his involvement on the Community Advisory Committee for the Office of Law Enforcement Oversight in King County, where he states his “work focuses on building bridges between community and law enforcement.”  Ironic that his article talks about the failure of elected officials to ease the tensions between law enforcement and the community, but his official bio brags that he is an elected official working on the issue. Maybe he should create some space for actual leadership, by resigning. (Crosscut and Senator Joe Nguyen’s bio)

Everett’s law enforcement will not be enforcing the city’s controversial dress code regulations for baristas, due to the issue being a low priority during the coronavirus crisis.  Recent U.S. Supreme Court decision to not hear an appeal filed on behalf of the “bikini baristas” allows the city to enforce clothing guidelines, but officials have stated their resources are currently being spent on more pressing issues.  (Everett Herald)

Former Spokane City Council President and failed Spokane mayor candidate Ben Stuckart is celebrating the cancelation of the show “Cops.”  While on the council, Stuckart passed restrictions that hampered the ability to film the show in Spokane, because he claimed the show unfairly portrayed people “on the worst days of their lives.”  Critics of Stuckart’s restrictions said that might be a fair assessment, but that the show provided a realistic portrayal of what police officers must face multiple times a day. (Spokesman-Review)

A short video outlines what the Tri-Cities must do to move up from a modified Phase I (aka “Phase 1.5”) opening to a more business-friendly Phase II posture.  Benton and Franklin counties must improve in five criteria to re-open more businesses. 1) no more than 74 new coronavirus cases for two weeks, 2) improve hospital readiness, 3) more testing, 4) contact testing must be performed within 24 hours, and 5) fewer cases in long-term senior care facilities. At least they won’t also be required to fix Jay Inslee’s Employment Security Department, or they might never re-open for business. (Tri-City Herald)

In a fundraising email on behalf of Jay Inslee’s re-election campaign, U.S. Senator Patty Murray provides one of the most inaccurate descriptions ever given the governor. The five-term U.S. Senator states that her fellow Democrat Inslee has, “taken quick action to help families cope with the financial impact of this crisis.”  Really???  Murray might think differently if she actually left the safe cocoon provided by her staff and handlers, and spoke to any of the tens of thousands of Washington residents who are still waiting for the Employment Security Department to process their promised benefits, months after losing their jobs. The Inslee campaign will see money sooner from this email blast than thousands of Washington workers will receive their much-needed checks from the state.  It is interesting that the members of the state’s Republican delegation are fighting for those who have been promised unemployment benefits (see story above), while Senator Murray attempts to ignore financial suffering with false praise to benefit her former congressional colleague.  (Inslee Campaign fundraising email). 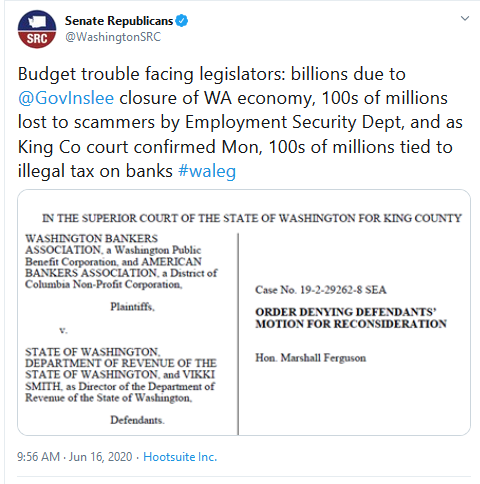 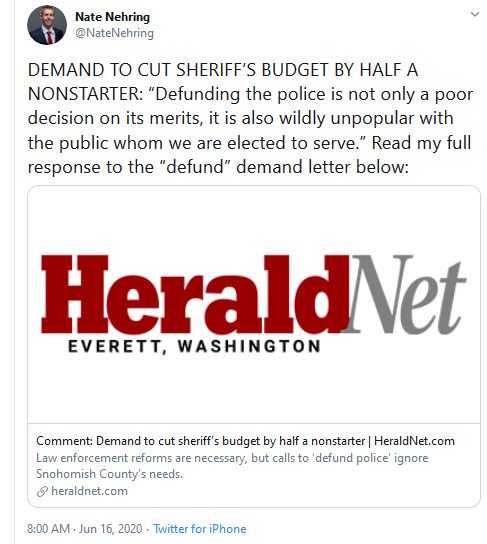