While presidential candidate Joe Biden and Governor Jay Inslee continue to claim everything is fine with the “peaceful protests,” Seattle reveals that last weekend’s “peaceful” protesters had explosives and dangerous bear spray, among other items not normally associated with “peaceful”.

571 applicants will receive their Washington State law license through “diploma privilege” instead of having to take the long-feared bar examination, due to the coronavirus outbreak and riots.   The Washington State Supreme Court approved the exemption, which allows graduates of accredited law schools to receive their license.  While there were some concerns about the health risks of bringing applicants together to take the exam, Seattle University law department faculty complained it was too tough for students to study with the sounds coming from the neighboring CHAZ. “Some of our students have said they have trouble sleeping, with the sound of helicopters overhead, the thunder of flash-bang grenades nearby and the stench of tear gas drifting indoors.” Leave it to members of academia to blame law enforcement for squelching the violent riots, and not the actions of the rioters who caused said squelching. (Spokesman-Review)

Karl Rove states in his Wall Street Journal column that Joe Biden’s insistence on calling the recent riots in Portland and Seattle “peaceful protests” could cause his presidential campaign “to lose ground with the political center, with voters who are sick of the nihilism they see on their nation’s streets.”  As Washington State residents have seen firsthand, Rove believes Democrat officials (like Governor Jay Inslee and Attorney General Bob Ferguson) will not condemn the actions of rioters for they “fear the party’s progressive wing.” Rove reminds readers that in early June, 69% of Americans felt the violent protests were “unjustified” and this number has likely increased in the subsequent two months. (Wall Street Journal)

The Canadian government is placing more restrictions on Americans driving through its country to reach Alaska. While the America/Canadian border is still closed to all unnecessary travel, there has been an exception made for those who are driving through Canada to Alaska.  Starting Friday, new restrictions will be put in place which will further limit Americans activities while inside Canada.  Each traveler will be given a rearview mirror tag, must take the most direct route to their Alaska destination, cannot visit national parks, must pay at the pump, only use drive-thru food pick-up, and wear a facemask at all times. Other than that, welcome to the Great White North! (Bellingham Herald)

As Governor Inslee and Attorney General Ferguson remain quiet about their fellow Democrats on the Seattle City Council wanting to give in to the demands of rioters by defunding the police, Mayor Jenny Durkan presented explosives, bear spray, and other weapons found in a rioters’ van last weekend.  An 8-inch hole was blown in a wall of the police’s East Precinct, many construction trailers were set on fire, and 59 police officers were injured in the violence.  Meanwhile, Democrat officials, out of fear of the far-Left wing of their party, continue to either call the violence just “peaceful protests” or pretend it isn’t happening.  (Seattle Times and Rebecca Perry Twitter)

The Seattle police Guild president says the “ignored majority is pushing back” against the reckless plan of the Seattle City Council to cut law enforcement funding by 50%.  Guild president Mike Solan claims the recently launched stopdefunding.com campaign was able to collect more than 20,000 signatures in its first 36 hours. As the group’s TV ad receives more airplay, the campaign expects to receive tens of thousands more signatures before next week’s council vote on the controversial defunding measure.  If the council follows through with its drastic cuts, Nolan did not rule out a possible referendum campaign to overturn the council’s decision. (MyNorthwest, StopDefunding petition site, and YouTube/Seattle police Guild)

Many private schools in Pierce County are currently planning to offer in-classroom education for their students when the school year starts in a few weeks.  School administrators are working with health experts to develop safe methods for returning students to in-person instruction. The private K-12 schools will still provide distance learning for families concerned about the health risks. The schools continue to monitor conditions and are also preparing to resume distance learning for all students if this is necessary. (News Tribune)

One Republican and four Democrats are vying for the 10th Legislative District House seat which is open due to the retirement of Representative Norma Smith.  The top two candidates in next week’s primary election, likely the top Democrat candidate and Republican Greg Gilday, will face each other in November’s general election. Gilday leads in fundraising for all candidates, while Angie Homola and Suzanne Woodard have raised far more than two other Democrat aspirants. The district encompasses Whidbey and Camano islands, and a portion of both Snohomish and Skagit counties.  The district also recently replaced retired Republican Senator Barbara Bailey with local farmer Ron Muzzall, who is facing the well-financed campaign (with large contributions from state employee unions and Democrat party organizations) of challenger Helen Price Johnson.  (Everett Herald and Washington State Public Disclosure Commission)

Yakima County remains a national hot spot for coronavirus infections, but the numbers are improving as more residents adhere to health/safety guidelines which include wearing a facemask.  After experiencing daily new infection rates of over 200 during COVID’s peak, the county has seen four straight days of below 81 new cases, while the number of hospital patients have been reduced to just 26, from the more than 50 the county experienced a couple of weeks ago.  Yakima County needs to reach approximately 60 new cases every two weeks to advance from its current “modified” Phase I status. (Yakima Herald)

Two newly discovered livestock attacks, by wolves from the Wedge pack in Northeast Washington, likely occurred before the Washington State Department of Fish and Wildlife (WDFW) carried out the elimination of one of the pack’s three wolves earlier this week.   WDFW officials say they will wait until after they have assessed the impact of the removal of one female wolf before deciding if further action is needed. Since mid-May, the Wedge pack has been responsible for the deaths of four cattle and injuries to 13 more. (Capitol Press)

Walla Walla is following the example of many Washington cities and is closing on street parking to allow restaurants, bars, and wineries to serve more customers outside.  With new state restrictions on inside service, Walla Walla will allow establishments to cordon off sidewalks and adjacent parking spots starting this weekend.  (Walla Walla Union Bulletin) 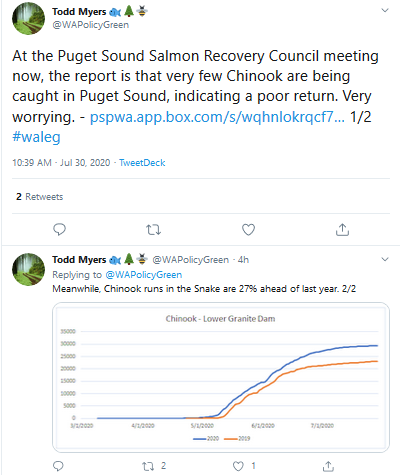 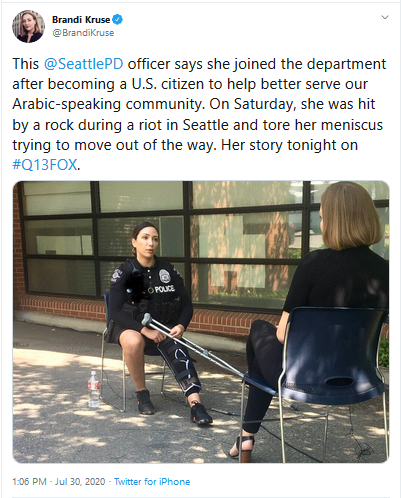