Seattle Mayor Jenny Durkan must feel abandoned by statewide Democrats, since not a single one of them is willing to publicly support her battle to only cut funding for Seattle Police by 20%, instead of the 50% demanded by the far-Left Democrats on the City Council.

Former Democrat Washington State Auditor Troy Kelley has lost his appeal on his 2017 conviction for fraud, possession of stolen property, and falsifying records, and must now serve one year in prison.  Kelley, once a “rising star” in the Democrat Party, was found guilty in federal court of using his real estate tracking company to steal $3 million from escrow companies.  Kelley then used his ill-gotten gains to afford spending nearly a half million dollars to fund his 2012 campaign for state auditor (while no other candidate spent more than $165,000 on the race).  It is interesting to note that the McClatchy newspaper’s reporter fails to mention in today’s lengthy article that the ethics-challenged Kelley is a Democrat, even though it does state that in 2015 calls came “for his resignation from both Democrats and Republicans.” (News Tribune and Washington State Public Disclosure Commission reports)

The impact of the coronavirus outbreak on international travel will have a lasting impact on Boeing’s assembly jobs in Washington State.  International air carriers expect fewer passengers in the coming years, and thus will be purchasing fewer large airplanes.  Boeing is considering consolidating assembly production, which could mean fewer Washington State jobs, as the company will likely favor production in the more business-friendly environment of South Carolina. This could mean ending 787 production in Everett.  Boeing CEO David Calhoun said, “We will prudently evaluate the most efficient way to produce the 787 to include the studying of feasibility of consolidating our 787 production into one location.” (Everett Herald)

We at Shift are wondering if Seattle Mayor Jenny Durkan feels abandoned by her fellow Democrats, that she has spent years supporting before she ever ran for public office, as she wages the biggest political fight of her career attempting to repel the liberal frenzy to slash funding for law enforcement.  Durkan, who has long been a respected voice within Seattle’s liberal establishment, is receiving no public support from the state’s federal Democrats, as neither Senator Patty Murray nor Senator Maria Cantwell have publicly stepped up to support their old friend.  Governor Jay Inslee and Attorney Bob Ferguson are often commenting (or filing lawsuits) on issues that are not the responsibility of state government, but have remained silent as their fellow Democrats on the Seattle City Council propose to make Seattle less safe for its 775,000 residents.  Even Washington State Democrat Party Chair Tina Podlodowski, who has been active on LGBTQ issues with the Mayor, has failed to come to the aid of Mayor Durkan.  Even though these individuals represent a statewide constituency (and a public that opposes defunding police by 71%, in the latest poll), none of them are willing to publicly side with Durkan out of fear of drawing the wrath of the extreme left wing of their party. (Note: In the Daily Briefing, we always link our news segments to media reports on the subject.  Yet there are no stories in the region’s media related to this major split within the state’s Democrat Party over defunding police. Guess the reporters must assume that Inslee, Ferguson, et al, are all for defunding the police since they have not said anything, and so no split exists.)

Jordan Royer writes in an op-ed that the Seattle City Council “should slow down, engage the public, and consider the far-reaching and potentially destructive effects of their actions” in their rush to appease rioters by defunding the Seattle Police Department.  Royer, the son of a former Seattle mayor,  also condemns the current Seattle city councilmembers who have said very little about the personal attacks that have been levied against their two colleagues (Debora Juarez and Alex Pederson) who have not joined the liberal hysteria over making drastic and ill-advised cuts in law enforcement.  Royer states the other councilmembers should “apologize to their colleagues for the outrageous way they and their families have been treated simply because they are doing their jobs responsibly.”  Royer points out that a recent survey shows only 31% the ultra-liberal Seattle voters support the randomly selected 50% cuts position, and that nearly all of the current councilmembers ran last year on a platform of hiring more police officers.  (Seattle Times)

Motorist are upset they were forced to pay a toll due to a brush fire closing the last exit before the Tacoma Narrows Bridge.  On July 19th, emergency vehicles blocked the last westbound exit to the bridge as they fought a small fire.  As a result, drivers who wanted to take this exit were forced to cross over the span, and then return eastbound across the bridge where they were forced to pay a $6 toll (payments are only collected eastbound).  The state-run toll system did not allow operators to override the charge, thus forcing drivers to pay even though it was not their intention to cross the bridge.   (News Tribune)

Everett’s Paine Field will reopen to a few flights after being closed for ten weeks.  Starting this weekend, Alaska Airlines and United Airlines will resume a combined three flights a day from the terminal which previously handled 24 flights a day.  Temperature screening will be conducted on all passengers. (Everett Herald)

The co-owner of Kenmore Lanes does not understand why bowling is being targeted by state officials with strong restrictions, despite the easy ability to maintain social distancing.  Previously, bowling activities were to be resumed under the state’s Phase III guidelines, but they have recently been moved to Phase IV.  Joann Evans said, “The social distancing aspect is really easy to accomplish, there’s no doubt about that. One lane gives you about eight feet. So if you bowl every other lane, you’re least eight feet from the next bowler.” (KIRO Radio)

U.S. Immigration and Customs Enforcement (ICE) flights are continuing out of Yakima, but fewer detainees are being flown out of Washington.  Due to the coronavirus outbreak, ICE is detaining fewer individuals, and thus fewer inmates need to be transported.  From January through July, approximately 1,000 detainees were flown out of Yakima’s McCormick Airport.  This is significantly fewer than the 2,800 undocumented workers who were flown out the previous seven months in 2019.  Yakima is currently used for these ICE flights due to the arbitrary actions of King County Executive Dow Constantine to stop ICE from using King County’s Boeing Field. (Yakima Herald and AP)

A new report states that the reduction of new cases of COVID-19 in Yakima County is due to the increased use of facemasks.  The Institute for Disease Management says the county is now experiencing 80 to 90 new cases a day, compared to the 200 daily cases it saw in June, when numbers spiked.  Also, the number of coronavirus hospital patients has dropped from over 50 down to 20.  Yakima County remains the hardest hit region in Washington, with over 10,000 of the state’s 53,000 cases. (YakTriNews)

In an odd piece of political strategy, the Inslee campaign is helping the Washington State Republican Party by sending a short clip of the GOP’s ad to Inslee’s email list.  The short segment loops a few seconds from the TV spot that imposes the word “Failure” over Governor Inslee’s face.  Given Inslee’s vanishing act during the Seattle and Olympia riots, and the subsequent takeover of his party’s public safety positioning by left-wing extremists (during which Inslee has failed to comment on the radical measure to defund the Seattle Police put forth by his fellow Democrats), maybe being called a failure by Republicans is his most noteworthy accomplishment. (Inslee Campaign email) 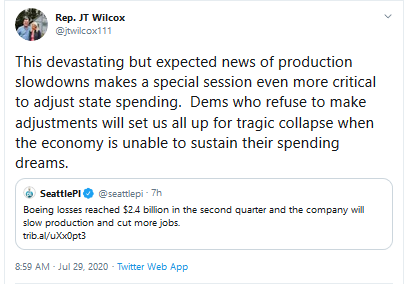 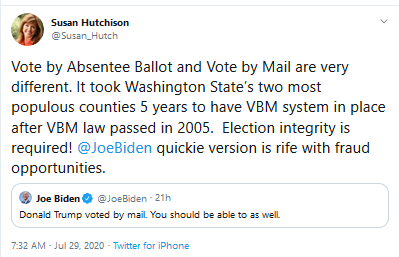 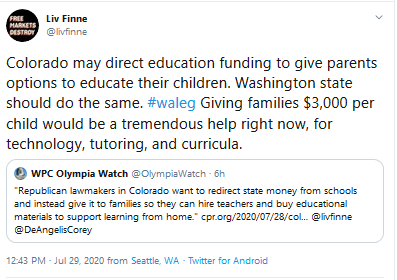