Despite its impact on the personal safety of hundreds of thousands of Washington State residents, Governor Inslee is refusing to state whether he supports the defunding of police that is supported by his fellow Democrats on the Seattle City Council.

Simple question: Does Governor Jay Inslee side with his fellow Democrats on the Seattle City Council who want to slash police funding by 50% or does he side with the 73% of Washington voters who oppose this extreme proposal?  Inslee is the sixth-highest paid governor in the country ($187,353 a year, after receiving pay raises in the past 12 months totaling $10,000), so he should be able to answer this very simple question, which impacts the public and personal safety of hundreds of thousands of his constituents.  The governor is consistently speaking out on federal issues over which his current position has no responsibilities.  Inslee should make his views known on this Washington State issue which is making national headlines every day. The silence from the governor is leading many to believe he must favor defunding the police. (Seattle Times, Elway Poll, and Washington Citizens’ Commission on Salaries for Elected Officials)

From the “We Are Not Making This Up” file: While falsely claiming a group which supports the re-election of Senator Steve O’Ban had darkened the photo of his Black opponent, the Washington Education Association actually darkened the photo of O’Ban’s Black opponent.  In a recent mailer, the Leadership Council (the Republican Senate’s campaign organization) did nothing unusual when it used a color picture of O’Ban’s opponent and converted it to black and white.  This is done all the time in campaign materials.  The WEA then took this mailer and made a mailer of their own.  The teachers’ union darkened the picture of O’Ban’s opponent and then used this altered image as proof that O’Ban supports a racist agenda.  Since the WEA is the one which actually darkened the photo, isn’t the union the one using racist tactics?  With Democrat party organizations being called out for their racist policies and 10th Congressional District Democrat candidate Marilyn Strickland claiming one of her Democrat opponents used racial charged “coded” attacks, the Democrat Party is dealing with some serious internal issues over racist activities.  It appears the WEA has failed to distract attention from the liberals’ internal issues, by themselves darkening an image of a Black candidate. (Chad Minnick Facebook, Crosscut, and Marilyn Strickland fundraising email)

Senator Shelly Short (R-Addy) says Governor Inslee is using a double standard in ordering health/safety measures on certain Washington State residents.  The Senator said “the hypocrisy is clear for all to see” in regards to the governor’s orders restricting church services, weddings, funerals, and live entertainment while doing “nothing to restrict hundreds if not thousands gathering for protest rallies and marches.”  Despite the fact the protests consists mostly of young people who are the primary group responsible for the latest explosion of coronavirus infections, the governor has done absolutely nothing to restrict the protestors’ activities.  Besides the arson, property damage, and assaults on police officers, these protestors are likely impacting the health and safety of Washington residents. (Senator Short media release)

While tribal casinos have not followed the health and safety guidelines of Governor Inslee during the coronavirus outbreak, a News Tribune editorial suggests they should at least ban cigarette smoking.  Because the state’s tribal nations are major contributors to Jay Inslee’s campaigns (and many other Democrat Party accounts), the governor has said and done nothing to stop tribal casinos from bringing large crowds together to gamble (yes, they are sovereign nations, but the governor could have used the leverage of the tribal casinos’ monopoly on the lucrative sports betting business he just gave them). The News Tribune believes the Puyallup Tribe should join other tribes in eliminating smoking in their casinos. The paper points out smoking causes lung problems and thus increases the severity of ailments caused by the coronavirus. Also, when patrons removes a facemask to smoke at a gaming table, they increase the likelihood of spreading the disease. (News Tribune and KING5 News)

Thus far, over $900,000 has been spent in a contest between two Democrats in the 5th Legislative District Senate race in East King County.  The battle is between moderate and business-friendly incumbent Mark Mullet and his far-Left Democrat opponent Ingrid Anderson, who is much more friendly to raising taxes. Since the Democrats and their special interest groups want to raise billions in taxes during the next legislative session, the government employee unions are spending hundreds of thousands of dollars (including $275,000 from the Washington Education Association) going after the fiscally prudent Mullet.  The only other candidate in the race has not raised any money, thus the race between the two Democrats will continue past the primary and will be decided in the general election. (Crosscut)

The Seattle Police Guild began running a TV ad today, asking people to oppose the extreme proposal by the Democrats on the Seattle City Council to slash police funding by 50%.  The ad states that if the measure passes, 800 police officers will be fired and response times for emergency calls will be slower.  The ad is encouraging viewers to go to the guild’s website and sign a petition against the city council’s proposal. (YouTube/Seattle Police Guild ad and StopDefunding petition site)

U.S. Attorney for Western Washington Brian T. Moran states in an op-ed, “If you liked what you saw in the CHOP, then you’ll love a police department that is defunded by half.”  In his article, Moran calls out the rush to push through the proposal by the Seattle City Council.  “The lack of analysis by these city leaders and the magnitude of the consequences of this decision are both alarming and reckless. It’s like the man who jumps off a tall building and is asked as he passes the 10th floor on the way to the ground, “How’s it going?” ‘So far, so good,’ comes the answer. But make no mistake, the impact of this decision will be rapid and devastating.” (Seattle Times)

A Seattle business owner says city leaders are more concerned with appeasing the rioters then they are in ensuring the safety and well-being of residents and businesses.  Property owner Joseph Wanagel says the city goes all out to provide restrooms and sanitizing stations for the protestors, who are committing arson and other damages. “But what about the people that actually live in that neighborhood? How are they going to be protected? How are they going to live there? How are building owners going to rent their apartments? It’s just a loss for words. I mean, the only call I get (from the city), is to hide my garbage can” (so rioters don’t set it on fire).  (MyNorthwest)

Central Washington University will reduce the number of students residing on its campus by more than half, as the school implements safety guidelines to combat the spread of the coronavirus.  Normally more than 4,000 students reside on the Ellensburg campus.  But to ensure no student shares a living space, only 1,800 will be permitted to live in student housing during the fall term. Faculty members will decide if their classes will be taught in person, online, or both. (Yakima Herald)

The Washington Department of Fish and Wildlife has killed a wolf that has been preying on livestock in the Northeast corner of the state.  The wolf was one of three members of the Wedge wolf pack and has been responsible for seven separate attacks on cattle in Stevens County in the past 35 days. (AP)

Governor Jay Inslee’s poll numbers continue to plummet as he fails to provide inclusive leadership in battling the coronavirus outbreak, and as his fellow Democrats fracture over police funding and the ongoing Seattle riots.  In a recent Crosscut/Elway Poll (which is often weighted toward liberal voters), we see the governor’s approval rating drop from 75% down to 49% in just over two months. While Governor Inslee has failed to take a public position on defunding the police (the governor instead spends his time seeking TV cameras to try out for a cabinet position in a possible Biden Administration), Washington residents overwhelmingly oppose (73% against) the actions of Seattle’s Democrat lawmakers to defund the police.  (Shift and Crosscut/Elway Poll) 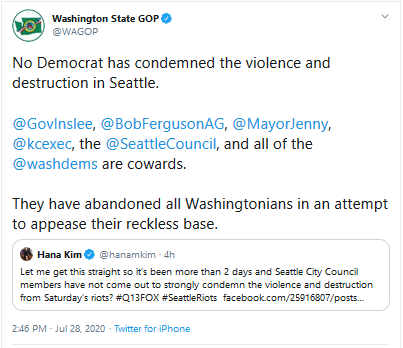 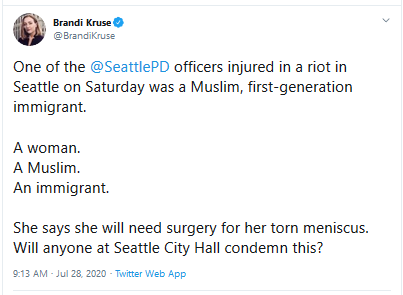 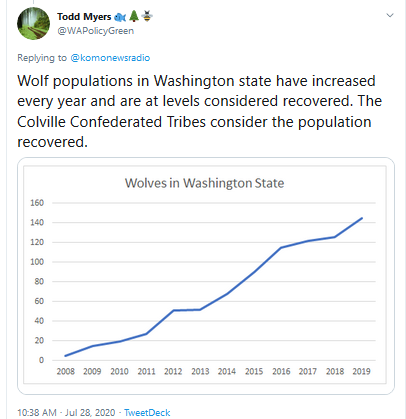