Is Governor Inslee not saying anything about the actions of the Seattle City Council because he is seeking far-left support for his cabinet-level position bid?

It is obvious Governor Jay Inslee does not want to alienate any of the far-left members of his party while he is searching for a job in a possible Joe Biden administration, so taking a stand on the destructive public safety policies of his fellow Democrats who serve on the Seattle City Council is out of the question.  You might ask, is he really risking public safety for his selfish pursuit of a job in a possible Biden Administration? Well, a group of (mostly far left) progressives have already compiled a slick 145-page booklet of acceptable individuals they have in mind for the Biden Administration. It lists Inslee as acceptable for a few posts, including EPA, Interior, and Energy.  Yet they surprised many by including Inslee as an agreeable candidate as Director for the Office of Management and Budget.  The left-wingers in DC might not remember that Democrat state legislators excluded Inslee from budget discussions in Washington State, and have sued him over his use of illegal line-item vetoes. And yet a national progressive special-interest group thinks he is suitable to handle the federal budget??? (Progressive Cabinet Project)

Governor Jay Inslee released a new set of restrictions on Washington residents, as he continues now in his fifth month) to make unilateral “emergency” decisions regarding the health, safety, and finances of Washington residents – all while refusing to consult with the legislature (or even talk with its leaders).  When asked about the latest set of restrictions on restaurants, gyms, weddings, and funerals from the governor, House Republican Leader J.T. Wilcox (R-Yelm) stated, “Since the Governor doesn’t let us know his intentions, it’s not possible to have an immediate, thoughtful response to his proposals.  I do hope that if he is addressing the gatherings where the virus spreads he will pay equal attention to the gatherings in Seattle and Olympia where violence and threats take place with people in close and dangerous proximity to each other.” (Seattle Times)

The initiative campaign to limit a governor’s ability to issue emergency orders (to just two weeks) continues to receive more media attention.  Initiative 1114 states that the legislature would be required to approve extending any emergency order for more than 14 days. The campaign needs to collect nearly 260,000 signatures before the end of the year.  If successful, the initiative would go to the legislature for lawmakers to adopt it, reject it, ignore it, or propose alternatives. It becomes law if adopted by the legislature. If not, then the initiative, and any legislative alternatives, would go to the voters in November 2021.  For further information on the initiative, please click this link. (News Tribune and Restore Washington)

The Evergreen State College continues to experience a decline in enrollment, now forcing the controversial school to make staff cuts and implement one-day-a-month furlough to address a 10% budget reduction.  While school officials attempt to portray the decline in enrollment solely on the COVID-19 crisis, Evergreen has experienced serious enrollment declines over the past half-dozen years.  From 2003 through 2013, Evergreen had approximately 4,500 students enrolled, while that number was only 2,800 students in 2019,  as more prospective students likely doubted the ultra-liberal college could prepare them to enter the workforce.  It is “optimistically” projected that the school will have approximately 2,300 students enrolled next year. (The Daily Olympian and Evergreen enrollment figures)

Three experienced individuals are running in a hotly contested house race in the “swing” 44th Legislative District.  One Republican (Mark James) and two Democrats (Anne Anderson and April Berg) are running for an open legislative seat in the Snohomish County district that has elected candidates from both parties during the past decade, a rarity among the state’s 49 districts. (Everett Herald)

Seattle Police Chief Carmen Best wrote a public letter to the city council stating the body’s recent ordinance banning law enforcement from using effective tools to disperse violent crowds will negatively impact police efforts to maintain peace and protect citizens.  As a result, Best says the council’s actions will impact how she will deploy officers during planned demonstrations this weekend.  In the letter Best states, “If I am not allowed to lawfully equip officers with the tools they have been trained to use to protect the community and themselves, it would be reckless to have them confront this level of violence under the current legal restrictions imposed by Council.” (Seattle Police Department Blotter)

In an op-ed, former Seattle City Council President Tim Burgess is critical of the severe cuts in the police department’s budget, which are supported by a majority of current councilmembers saying, “they serve no one.”   Burgess writes that the council’s action will reduce police effectiveness and will likely eliminate any police reform gains, “One thing is certain: If the people of Seattle perceive that core police services will become even slower than they already are, our chance for effective and lasting change will be lost in contempt for a city council that ignored its paramount responsibility — to safeguard public health and safety.” (Crosscut)

The owner of a business that was vandalized by rioters last Wednesday evening says the city council is not allowing the police to do its job to protect citizens.  Ian Eisenberg, owner of the cannabis retailer Uncle Ike’s said in a radio interview, “I don’t think this had anything to do with protests about George Floyd or police brutality. This was just straight up anarchist kids having fun, no message whatsoever, high-fiving each other and laughing. They’re having a good time and nobody’s gonna stop them. The city’s doing nothing.” (KTTH)

Meanwhile, state Democrat leaders continue to remain quiet over the actions of their fellow Democrats on the Seattle City Council which allow the violence and destruction to continue.  Governor Jay Inslee and Attorney General Bob Ferguson continue to make statements regarding federal government actions, yet they refuse to take a public stand on issues that are impacting the safety and well-being of hundreds of thousands of Washington State citizens. (Note: we usually link our headlines to related media stories, but since the members of the local media are not pursuing this matter [as they certainly would if it were Republican state officials avoiding comment on controversial actions by local Republican officials], we have no story to link.)

The City of Olympia’s former city manager drew a modest $5,000 fine from the Washington State Public Disclosure Commission (PDC) for illegally mailing campaign-related materials using taxpayer funds.  Steve Hall is no longer with the city, but the PDC oddly declared that the retired city manager would be fined an additional $5,000 if he does similar illegal actions in the future.  Prior to the 2019 general election, city personnel spent at least $10,000 in city funds to send a mailer encouraging Olympia voters to reject I-976 (the car tab reduction initiative). Even though the city council passed a resolution condemning the initiative, the PDC could not find evidence any councilmember was aware of the illegal mailing. It was just a lot easier to blame someone who has retired than to challenge sitting office holders for their complicity in illegal actions. (Seattle Times)

The Seattle Mariners will open their shortened 2020 season this evening by taking on the controversial Houston Astros.  After an off-season of confirmed reports of illegal sign stealing by the Astros, the team is likely relieved there will be no fans in the stands as Major League Baseball teams compete in a 60-game season.  Before Spring Training was canceled due to the coronavirus outbreak, Houston’s players were subjected to persistent fan taunting over the team’s cheating scandal. First pitch is at 6:05 tonight. (News Tribune and Los Angeles Times)

Chinook salmon runs are 29% higher than last year on the Snake River.  This news will likely upset Governor Inslee and environmental special interest groups, as this makes it harder to blame Snake River dams for their failed policies to protect the Puget Sound Orca populations. But, they will keep blaming the dams anyway, because they don’t like science. (Todd Myers Twitter)

Spokane area restaurant and bar operators are frustrated by the ever-changing state health restrictions.  Just as a business adequately prepares it work force, inventory, and floor layout for one set of regulations, the state imposes a new set of orders.  The constantly changing orders costs financially struggling businesses even more money. One Spokane chef said, “We don’t know how to operate at this point. The mandates and the regulations are changing so frequently.”  (KHQ)

Jay Inslee’s campaign is pushing hard by sending multiple emails to get a crowd for his Monday afternoon Zoom event with Senator Kamala Harris.  Since it is expected to be 90 degrees in Western Washington, and 100 degrees in Eastern Washington, Inslee’s campaign might have a hard time convincing people to join his 4:00 PM event.  And yes, it does seem odd that a candidate would schedule a major fundraiser in the afternoon of a workday.  Yet, looking at Inslee’s materials we noticed that they mention this is a 7:00 PM Eastern Time start. The two West Coast politicians (and failed presidential candidates) are evidently using this opportunity to build East Coast support for their pursuit of jobs in a possible Biden Administration. (Inslee Campaign) 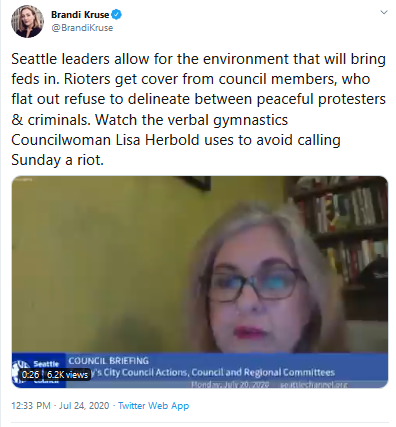 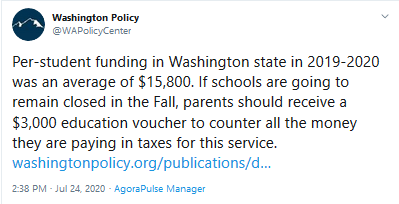