Senator John Braun tells his legislative colleagues that they are shirking their constitutional responsibilities by not calling a special session to deal with the budget shortfall.

Proving that there are a few voices of reason in state government a few Senator John Braun (R-Centralia) sent a letter to his colleagues this week regarding the need for a legislative special session.  Senator Braun is the top Republican member on the Senate’s Ways and Means Committee, and is widely considered to be the party’s leading budget expert. He is concerned that the legislature is shirking its constitutional responsibilities by allowing Governor Inslee to wield exclusive authority over the state’s finances.  Braun writes, “It is we (legislators) who have the power to make laws and spend funds. It is a power that we should carefully and jealously guard. The executive is charged with a different role: enforcing the laws. (And the judicial branch with interpreting those laws.) Checks and balances. Distinct spheres. This was a critical insight of both our federal and state founders in writing the constitutions. It is this framework that we swore to uphold. It is a framework we are presently shirking.” Sen. Braun states he is concerned that the governor is making laws “with no public feedback or input” and is making financial decision (like solely determining how the state should spend $2 billion from the federal government) which should be decided by the legislature.  We encourage Shift’s followers to take the time to read Senator Braun’s two-page letter. (Senator John Braun’s letter to his colleagues)

The U.S. Postal Service and the U.S. Attorney are investigating a Facebook post by a Bellingham Democrat legislative candidate, who claimed her ballot “was carefully tucked together with (her campaign material) by our neighborhood postal worker.”  A federal worker is not allowed to show favoritism to a political candidate, and thus what 42nd Legislative District House candidate Alicia Rule stated in her post was an illegal act done on her behalf.  It is most likely that the postal worker is completely innocent of any wrongdoing, and all of this controversy is the result of a poorly written social media post by candidate Rule, which gives the strong impression that something illegal did take place.  Instead of owning up to producing such a poorly written post, Ms. Rule continues to blame others – a trait which perfectly qualifies her to be a Democrat politician. (Bellingham Herald)

Even in ultra-liberal Seattle, Governor Jay Inslee is receiving poor marks for his handling of the protests and the subsequent police funding issue.  In the recently released Elway Poll, 49% of Seattle residents (who should be the core of Inslee’s political support) have a negative opinion of how the governor is handling the public safety situation, while only 44% have a favorable impression. Maybe his liberal base would be more supportive if the governor actually said where he stands and whether he agrees with the radical policed department cuts that are supported by his fellow Democrats on the Seattle City Council. (Elway Poll)

As Seattle lawmakers continue to ignore citizen’s concerns over public safety, another episode of looting and destruction took place on Capitol Hill on Wednesday evening.  And once again, no arrests were made of the individuals who broke into businesses and set fire to merchandise. (Seattle Times)

A federal judge rules that Seattle police cannot use crowd control resources to protect themselves or others. From the safety of his judicial chambers, U.S. District Judge James Robart allowed the Seattle City Council to continue to put police officers at risk, by restricting their ability to control crowds with non-lethal devices, such as tear gas and blast balls .  As we have seen over the last month (and again last night), what council members consider to be non-violent protests often turn violent and destructive – and dangerous for police officers operating under political restrictions. (Seattle Times)

The reliably liberal Seattle City Councilman Andrew Lewis is struggling in his attempts to explain why he is already flip-flopping on last year’s campaign pledge to protect the public by hiring more police officers.  Lewis defeated former Seattle Police Chief Jim Pugel in the 7th Council District (Magnolia and Queen where public safety is a growing concern) in 2019, partly because he pledged to hire more police officers.  Now that Lewis is in office (and no longer needing police guild money) he has joined the council majority in calling for a 50% reduction in the Seattle Police budget. In an interview on KTTH, Lewis said he wants police to only respond to criminal calls and not to non-criminal situations.  Even though all the information Lewis cites to justify his craven reversal has long been publicly available, Lewis claims he only became aware of it in the past few weeks – when it became a big political issue that he could not face up to. (MyNorthwest)

The Port of Longview Commissioners voted to join nine other Western Washington ports in paying the salary of a federal employee to review applications.  The National Marine Fish Services and the U.S. Fish and Wildlife Service are currently understaffed, and permit applications are taking longer to process.  So, the ports of Seattle and Tacoma will pay 44% of the salary/benefits of the federal regulator, while eight smaller ports will pay the rest.  Longview Port Commissioner (and state senate candidate) Jeff Wilson was the lone vote against the agreement, calling it a “ransom.”  Wilson stated, “It’s something very fundamentally wrong when we, as (elected officials), are aware of a process that’s not only inefficient, it’s ineffective. And the only way to make it better is to throw money at it.” (Longview Daily News)

Once again, the call to rename Mount Rainier has resurfaced.  Tongue in cheek, some are suggesting selling the naming rights to Jeff Bezos and Amazon to see what type of politically altruistic name can be placed on the state’s most prominent landmark. Also, since Governor Inslee is refusing to call the legislature back into special session, maybe Bezos’ payment could offset the $4 billion (and growing)  revenue shortfall that Jay is hoping will help justify the state income tax he is pushing.  (News Tribune)

Initiative 1114 aims to limit a Washington governor’s emergency powers, and mandates that the state’s chief executive must obtain the approval of the legislature to extend emergency orders past 14 days.  The initiative is supported by many who believe Governor Inslee has overextended his constitutional powers during the current coronavirus outbreak. (Spokesman-Review)

Thanks to an increase in safety precautions, Yakima County is again seeing a drop in its number of coronavirus cases.  As opposed to a few weeks ago, when there were more than 200 new cases a day, health officials say they had only 62 new cases yesterday.  The increased use of facemasks is given as a reason for the decline.  State officials say the Yakima County, which has been responsible for nearly 20% of the state’s cases, needs to be below 25 new cases a day for two weeks before it can move up to Phase II. (Yakima Herald) 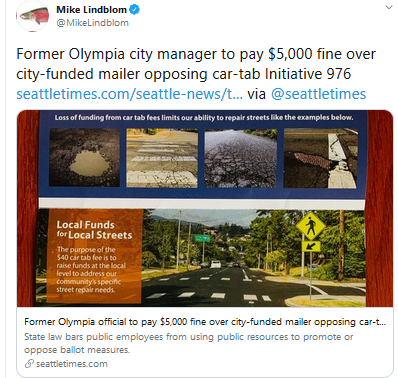 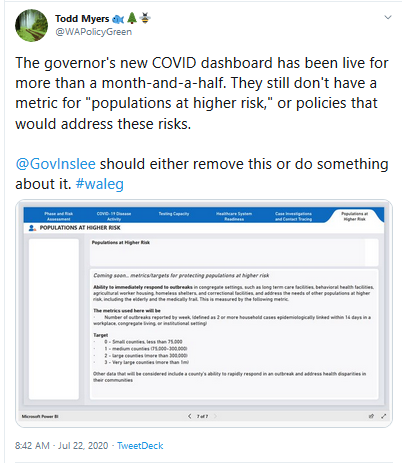