Because of ongoing public safety concerns, realtors report that many home buyers are no longer interested in Seattle, while some Seattle residents are looking to move elsewhere.

The latest Elway Poll shows voters believe Governor Jay Inslee has done a poor job handling the protests/police issue.  An incredible 62% of Washington residents hold a negative opinion about the governor’s “performance”, compared to just 32% having a favorable opinion. This is understandable given the embarrassing and bumbling response (i.e. “It is news to me.”) when he was first asked what he thought of the violent takeover of 6 blocks on Capitol Hill and the forced closure of its Seattle police precinct headquarters by protesters in June. The governor’s lack of awareness continues with his refusal to say whether or not he agrees with the radical proposals by his fellow Democrats on the Seattle City Council to risk public safety and slash 50% from the police budget. (Jim Brunner Twitter and Rebecca Perry Twitter)

The Washington State Republican Party has released two television ads in the past week that highlight the lack of leadership from Democrats during the past few months.  The first spot, called “Enough”, details how Governor Jay Inslee and Mayor Jenny Durkan allowed rioters to take over Seattle.  The second ad, titled “Failure”, reminds voters of the incompetence of Inslee’s Employment Security Department. That agency, run by his hand-picked director and major Democrat fundraiser,  allowed $650 million dollars in taxpayer funds to be stolen, and how Inslee’s poor management has increased the financial suffering of tens of thousands of Washington residents. (Washington State Republican Party)

The Washington Interscholastic Activities Association (WIAA) has once again revamped the state’s high school sports schedule, and will have football and other high-contact sports start in February.  Due to the coronavirus outbreak, only low-contact sports (i.e. cross country, golf, tennis) will be active in the fall.  Instead of three sports seasons, the WIAA has decided to spread the sports over four truncated seasons.  Each sport will have fewer contests scheduled.  Since the COVID-19 crisis is an “incredibly fluid situation,” WIAA officials warn the schedule may still be changed. (Everett Herald)

As predicted, Seattle’s continued promotion of failed public safety policies, accompanied by  an amazing absence  of leadership in combating the recent violence in the city, is forcing many hard-working and thus taxpaying citizens to re-evaluate whether they want to live in the city.  Realtors are reporting that homebuyers are no longer considering living in Seattle and instead are looking to live in the suburbs.  Seattle, which was once the most livable city in the country, has lost its appeal and many people no longer feel safe.  Even though the problem has increased dramatically in the past weeks, the problem started long before this year, as Seattle’s extremely liberal policies on drugs, crime, and homelessness began to take effect.  As one resident stated, “Seattle used to be a place that had a great vibe and you wanted to go into the city. I’m not feeling that so much anymore. I think the drug part, it’s an epidemic. It’s not going away. I have seen it getting worse.” (KOMO News)

Bowing to protesters, instead of listening to the reasonable concerns of anxious residents, King County Executive Dow Constantine is planning to close a juvenile detention center and shut down the downtown Seattle King County Jail in phases.  While many residents are concerned about their personal safety, it appears Constantine has failed again to listen to the citizens he is sworn to protect (but, since the executive has King County police officers protecting him 24 hours a day and driving him to taverns, we recognize why he has difficulty relating to the concerns of average citizens).  Understandably, the protesters were delighted with the news with one of the leaders proclaiming, “We are at the forefront of something really big here. Now with this moment, with this uprising that we’re all seeing, there’s increased momentum and we were able to put these demands again in front of Dow.” Meanwhile, some members of the King County Council are upset that they were surprised with this revelation.  Councilmember Kathy Lambert wrote on Facebook, “Law abiding citizens are not respected…It is time to join Chief Carmen Best in saying ‘Enough!’ Enough crime and looting and violence.” (Seattle PI, MyNorthwest, and Facebook)

King County voters will be able to decide in November if the King County Sheriff is to remain their choice, or if the office is to be put into the unpredictable and highly partisan hands of the King County councilmembers.  The three members who identify as Republican (though the county went non-partisan on its ballots in 2008) voted to keep the sheriff’s office under voter control, only to be out-voted by the six liberal members to remove the public from deciding who leads the sheriff’s office and to give the council itself control over the public safety department. Fortunately, voters will decide this issue in the general election.  (Seattle Times)

A group of young men came to the aid of an off-duty King County deputy, stepping in as she was being strangled by an intoxicated individual (who is now accused of causing a multiple-car accident).  On her way home, an officer came across an accident in Auburn, where the suspected driver was attempting to walk away from the scene. The deputy stopped the man for questioning and was soon caught in a headlock. Young men rushed to her defense and held the suspect until the officer could place him in handcuffs. (YakTriNews)

Restaurants in Old Bellevue can apply with the city to use on-street parking spaces to extend their seating capacity.  Similar to efforts in the Tri-Cities and Vancouver, eateries will be able to put up borders around on-street parking spaces and use them for serving areas.  This provides more capacity for the restaurants, while still complying with state health restrictions. (Bellevue Reporter)

Some Tri-Cities and Yakima area breweries and wineries can offer outdoor service while others cannot.  The state decided that breweries and wineries with a commercial kitchen which provided meals could serve customers, while those without a dining menu could not.  One of the state’s concerns is that if too many wineries are open it will increase the number of tourists that will come to a region which is still in a modified Phase I.  Impacted wineries and breweries are working with state health officials and are hoping to have a resolution next week. (Yakima Herald)

Wenatchee’s Link Transit will provide free rides through the end of the year and require all passengers to wear face masks. The transit system has been offering free rides since March but has not seen the increase in homeless riders that other public transportation systems have experienced.  The face mask requirement drew considerable conversation regarding how the order was to be enforced. (Wenatchee World)

Jay Inslee’s campaign sent out an email blast titled “Hop on Zoom with me and Kamala.”  (Yes, we noticed the major grammatical error in the email’s title.)  Inslee is asking people to contribute to watch the two failed presidential candidates throw platitudes at each other as they both seek jobs in a possible Biden Administration.  It is interesting that while Seattle is in the throes of a public safety crisis due to “progressive policies”, Inslee is deaf to the concerns of residents when he praises Senator Harris for being “a leading voice for progressive policies” regarding law enforcement.  It is too bad Harris cannot be in Seattle to witness the boarded-up windows in downtown Seattle and feel first-hand the impact of her (and Jay Inslee’s) “progressive policies.”  (Inslee campaign email) 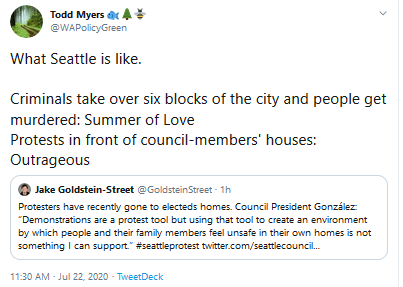 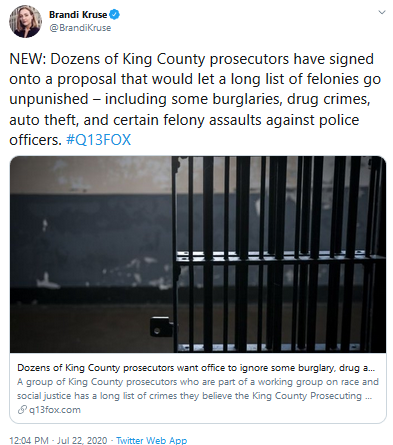 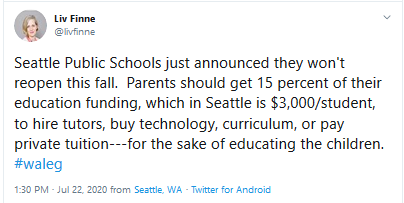