When analyzing why Governor Inslee and the Democrats are not calling a special legislative session, it is important to remember they always consider what is best for them first. 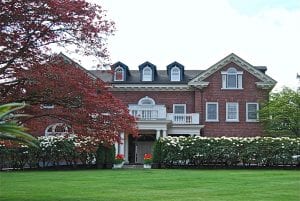 Shift has created an information page on Republican candidates seeking to reside in the Governor’s Mansion next January.  Primary ballots will be mailed to Washington State voters in the next couple of days, and many moderate/conservative voters are undecided about who they are going to support for our state’s top political job. We thought our readers would appreciate some background on the top five (by financial support) Republican candidates for governor.  We have provided a link to their campaign websites, their YouTube channel/pages, and if applicable, a link to their campaign TV ads.  (Shift)

The Washington Wire does a good job explaining Governor Jay Inslee’s and Democrat legislative leaders’ illogical rational for not holding a special session to fix the state’s budget, but the article fails to provide the three political reasons for the procrastination of the Democrats.  Left our of the story was, first, by not fixing the state’s revenue shortfall, Inslee is helping Speaker Nancy Pelosi build the case for yet another large federal bailout (where pork-barrel politics will be in full play just before the election). Second, a special legislative session could force lawmakers to respond to the public outcry over the latest state workers’ pay raise which Governor Inslee just allowed.  And finally, Democrats want to wait until after the November elections to use the state’s financial predicament to achieve their greedy goal of raising taxes even further and to make government even larger. Just follow the bouncing ball – a larger state government means more unionized state workers, which means more money from the unions for Democrat campaigns and liberal organizations.) (Washington State Wire)

The Seattle Times called Congressman Dan Newhouse (R-Sunnyside) a “legislative hero for journalism” because of his leadership on the Local Journalism Sustainability Act.  The bill is designed to help local newspapers which have experienced many financial setbacks in recent years.  The bill would provide credits for local publications to hire journalists and provides tax credits for subscribing to, and advertising in, local newspapers. (Seattle Times)

A headline we are tired of repeating, but we must: Thousands of Washington State residents have yet to receive unemployment benefits from Governor Jay Inslee’s embattled Employment Security Department (ESD).  An attorney who is suing the state because of its failure to provide promised benefits says, “ESD made the decision to treat every claimant as a fraud imposter when they decided to pause benefits, requiring identification, and then when people sent in identification, not promptly resolving the issue for the claimant.” (MyNorthwest)

Most local media outlets are refusing to inform their followers of the connection between the Black Lives Matters movement and the alleged killer of a Bothell police officer, despite the movement’s overwhelming influence over recent local events, and its support for radically altering major policy decisions and funding of law enforcement in Seattle and elsewhere.  Besides a few non-liberal members of the local media, the Everett Herald is the only media outlet which has mentioned that a couple of weeks ago, accused murderer Eugene Washington had posted a new Facebook profile picture framed with the words, “Black Lives Matters.”  While providing a thorough background on Mr. Washington’s past arrests, work experiences, family, past and current living situation, and possible mental illness, the timely Black Lives Matter reference has gone unreported by the local media.  This is especially surprising when the same media outlets report eyewitness’ accounts of Mr. Washington shouting “Come on, pigs” before he opened fire on the officers.  We will be curious to hear from the local media on why they have chosen to omit the relevant fact of Mr. Washington’s support of Black Lives Matters and if they will apply the same standards if an individual with conservative ties is accused of committing an atrocity in the future. (Everett Herald and Twitter)

As Seattle Democrats continue their intra-party fights, Mayor Jenny Durkan is appealing the decision of a King County Superior Court judge to allow a recall petition to go proceed.  Durkan contends she was not responsible for the police use of tear gas on protesters, and thus the recall supporters’ claim that the mayor did not use proper policing techniques is not valid.  If the recall effort does proceed (50,000 valid signatures will be needed to place a recall on the ballot), then we can expect state Democrat officials to continue to hide from stating who they support in a battle that is tearing apart the their party.  Does Senator Patty Murray, Senator Maria Cantwell, Governor Jay Inslee, Attorney General Bob Ferguson, and the State Democrat Party Chair support Mayor Durkan and Seattle’s establishment Democrats or do they support the progressive and radical Democrats who have recently caused Durkan so much grief? We know the local media would rightfully be demanding answers from Republican leaders if a similar battle was brewing within conservative ranks.  (Seattle Times)

The Seattle Mariners’ fans can purchase for $30 a “recycle-friendly” cutout of themselves to be placed in the stands at T-Mobile Park.  Since fans will not be able to attend any of the 30 home games in the upcoming shortened season, the cutouts will at least provide an appearance of people in the stands. (Seattle Mariners)

An environmental group has filed a lawsuit challenging the U.S. Fish and Wildlife Service’s recent decision to not move forward in repopulating the North Cascades with grizzly bears.  The lawsuit contends this action violates the Endangered Species Act.  Despite public opposition, the environmental activists at the Center for Biological Diversity contend that 280 grizzlies should be allowed to roam the North Cascades. (iFIBER One)

The City of Selah, which has been the center of both a Black Lives Matter and a COVID-19 reopening controversy, is debating how and when to return public comments to city council proceedings.  Like many city governments, Selah suspended public comment periods in response to Governor Inslee’s orders regarding how local governments could conduct meetings. (Yakima Herald)

The Washington Farm Bureau announced it will be distributing 500,000 washable facemasks to farm workers across Washington State.  The farm advocacy group’s actions are due to the high COVID-19 infection rates of farm workers in Central Washington counties. (Washington AG Network)

The Kittitas County Republican Party headquarters was vandalized last week.  Rocks were thrown through large store front windows causing glass to be littered on the sidewalk.  Even though there are no suspects in the case, some believe the damage was caused by those who support the destructive protests in Seattle.  A hair stylist a few doors away said, “This is horrific. Out of all the years of living in this community (Ellensburg), this is horrible. People just don’t have respect anymore.” (iFIBER News) 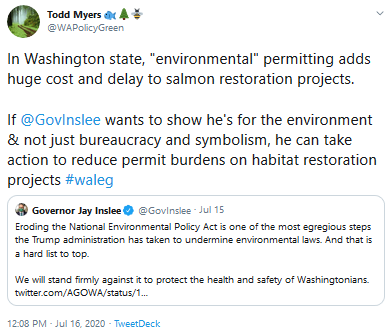 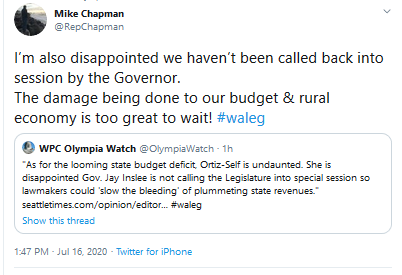 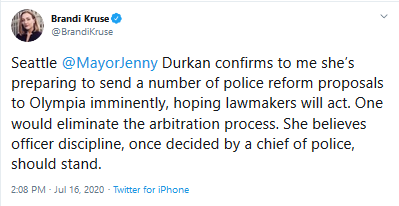