Representative Springer’s comments about why Democrats failed to provide legislative oversite to Governor Inslee’s emergency powers, has left many people in disbelief.

House Democratic Deputy Majority Leader Larry Springer (D-Kirkland) recently provided one of the most illogical (and extremely partisan) statements to justify the failure of Democrat legislators to do their job and provide legislative oversight over Governor Jay Inslee’s emergency powers.  In a TVW interview, Representative Springer responded to a question on whether state Democrat lawmakers would now seek reforms on the governor’s emergency powers by saying, “In the leadership level of our caucus, there was very little discussion or appetite for trying to take legislative action to curb the governor’s authority when we were in the middle of a pandemic.  The time to have that discussion is now, for the next one.  Trying to second guess decisions the governor is making in the middle of a pandemic that no one had ever dealt with, is probably never the best time to make decisions.”

What Springer appears to be saying is 1) during an unprecedented crisis, in which there was no precedent to guide decision making, the representative believes it is best for one unqualified person to make all of the decisions, instead of the collective wisdom of leaders with diverse backgrounds and experiences. It begs the question, does this mean the Democrat legislator favors a dictator over a three-branch form of government during all crises?  2) The Democrats think now is time to reform the emergency powers, because the next crisis could occur when a Republican is governor and Democrats sure do not want to supply that governor as much power as they just provided Governor Inslee? 3) Why isn’t it appropriate for legislators to “second guess” Governor Inslee’s decisions during the recent crisis, but it will be OK for future legislators to second guess executive decisions in forthcoming emergencies? It sure must be fun to be Representative Springer, when you can just spew things out with no consequence. (TVW)

Republican legislative leaders question Governor Jay Inslee’s stubborn refusal to end the state of emergency which has been in place for nearly 500 days.   Even though the governor has finally removed most capacity and activity restrictions (making Washington the 48th state to do so), he has yet to lift the state of emergency which allows him to continue his one-man rule of the state through “emergency” orders.  In a joint statement from House Republican Leader JT Wilcox and Senate Republican Leader John Braun questioned why the governor has refused to inform the public when the “emergency” will end.

Representative Wilcox said, “On May 13, the governor was able to declare June 30 would be the statewide reopening date, no matter how many Washington residents had been vaccinated by then. If he could make such a life-changing prediction six weeks in advance, he also should be able to declare when the state of emergency will be over.” (Senate and House Republican Caucus joint media release and Governor Inslee media release)

The teachers union is discussing how they can further disrupt our children’s education by imposing even more unreasonable demands before the start of the new school year.  A major item up for discussion at the National Education Association’s annual (virtual) conference is a proposal to force every student and staff member to be vaccinated and tested for COVID-19 before in-person classes can resume in the fall.  After a year of ignoring guidance from local, state, national, and international health officials, and unnecessarily delaying in-person instruction through selfish demands, this latest proposal is further proof that the union is more concerned about flexing political muscle than in the education and well-being of the students. Because, after all, the students don’t pay dues. (Corey DeAngelis Twitter and National Education Association Annual Meeting)

Jason Mercier of the Washington Policy Center writes that recent tax revenue reports show there is more than sufficient funds available for Washington State lawmakers to provide tax relief to state residents, as has been done by other Western states.  In a guest commentary for the Spokane Journal of Business, Mercier writes that the state’s June quarterly revenue projections estimate $2.6 billion more in tax funds than were projected just three months ago (when lawmakers wrote the 2021-2023 biannual budget).  He also notes that California, Oregon, and Idaho have used their surplus taxpayer revenues to provide relief to state taxpayers.

Mercier suggests a 0.2% cut in the state’s sales tax (which would help low-income families the most) would only reduce the state’s revenue take by  $600 million, while still leaving the state with an additional $2 billion in unexpected revenue.  While Mercier’s suggestion makes sense, Washington State Democrat lawmakers’ recent actions of passing an unconstitutional (and financially unnecessary) state income tax on capital gains and a variety of other tax increases, show the Democrat greed for our money is far greater than their desire to help Washington residents pay their bills or feed their children.  (Spokane Journal of Business and June 2021 Washington State Revenue Forecast)

In yet another demonstration that even normally liberal Seattle residents are frustrated by the ultra-liberal policies implemented by the city’s elected leaders, the Compassion Seattle organization submitted more than 64,000 signatures to place its homeless initiative on the November ballot.  The group gathered the signatures to push the initiative forward in just four weeks, despite needing only 33,000 signatures to place Charter Amendment 29 on the ballot. The measure would fund mental and chemical dependency treatment centers, and housing for those currently experiencing homelessness, with the goal to ensure “city parks, playgrounds, sports fields, public spaces and sidewalks and streets remain open and clear of encampments.” (Compassion Seattle media release)

While expensive government policies nearly always fall dramatically short of meeting their stated carbon-reduction goals, the Darigold Company announced yet another example of private industry leading the way to improve our climate.  The Washington based dairy producer announced the construction of a $500 million state-of-the-art butter and protein production center in Pasco, which is expected to reduce carbon emissions by 25%.  The company claims in a media release that the new facility will “incorporate a variety of innovative technologies and conservation strategies that combined could mitigate over 300,000 metric tons of CO2e per year.”

The company also said that the Pasco plant will “create over 1,000 onsite and indirect supply chain and services jobs.” The facility is targeted to be fully operational by late 2023 or early 2024. (Darigold media release)

A leading hydropower advocate claims the clean energy which dams produce, and their ability to store energy, make our region’s dam system the “Cinderella of the clean energy movement.”  While society is seeking clean energy sources as it reduces dependency on fuel and coal, the executive director of the Northwest RiverPartners Kurt Miller states hydropower provides the stabile power source which both solar and wind power do not.  Miller also claims that improvements in turbines make them far more fish friendly, with 99% of juvenile salmon passing through the system. (Lens)

In the first of a two-part series, Shift takes a look at a few of the many failures of the Inslee Administration during the 16 months of the pandemic – many of which resulted in the unnecessary spread of the virus.  From COVID-19 outbreaks occurring in nearly every state-run residential facility (prisons and hospitals), to a poorly planned and implemented immunization program which lagged far behind nearly all other states during the critical initial weeks last December and January, the state reacted poorly at nearly every stage of the pandemic. Governor Inslee has no one to blame but himself for the state’s poor performance, since he stubbornly refused to allow local officials and legislators to have any input on decisions which impacted millions of Washington State residents. (Click to read full Shift Article)

Democrats are suddenly calling for reform of the Washington State Public Disclosure Commission now that they are being fined (still at a far lower level than Republicans) for their many campaign violations.  Democrats “weaponized” the PDC in the early 2000’s in the hope that they would go after Republican candidates and organizations.  Yet conservative activists have turned the tables on the Democrats by filing complaints for their many violations of state campaign finance laws. Democrat politicians don’t like being held accountable for their actions and are now seeking to (again) “reform” state campaign finance laws, with some even calling for taxpayer funding for all campaigns (similar to the ineffective yet expensive “Democracy Voucher” program in Seattle). Thus, just another example of how Washington Democrats want to impose failing Seattle policies onto the rest of the state. (Click to read full Shift Article) 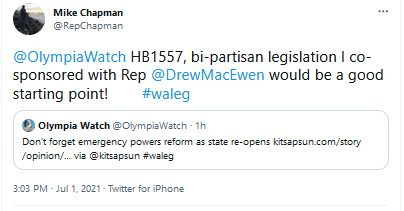 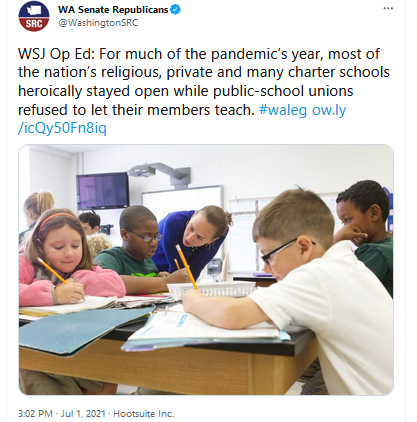