Union officials’ love of money clouds their perspective on transparent government and the press’ ability to expose disreputable individuals.

This week Shift sits down with SeaTac City Councilmember Peter Kwon to discuss the city’s remarkable financial turnaround.  Kwon, who received the Slade Gorton Rising Star Award at last weekend’s Roanoke Conference, details how the city went from $2.5 million in debt to having a $50 million surplus – without raising taxes.  It is truly an incredible story and other local government officials could learn from SeaTac’s success.  (Shift)

Superintendent of Public Instruction Chris Reykdal came out against legislation which will allow sports betting in Washington.  The SPI believes the current technology will allow students to gamble.  Since Reykdal’s infamous election night tweet in which he instructed his fellow Democrats to use government actions to punish those who voted for I-976, we must wonder what the gambling industry did to warrant Reykdal’s vengeance? (Cornfield Report and Reykdal’s tweet)

In a clear example of greed clouding one’s judgement, unions are coming out against important government transparency laws which are used to bring accountability from our public officials.  Specifically, unions are using a full-court defense of the Democrats self-serving legislation to hide government employees’ birthdays from the public.  Media members often use birthdates to expose unsavory individuals who seek positions of public trust, including teachers accused of sexual misconduct moving to another school district.  Unions are upset about government workers’ birthdates being public because organizations use that data to inform government workers they don’t have to pay union dues. The unions use the straw man argument that providing birthdates make government employees vulnerable to privacy crimes. Yet in recent court hearings the unions’ lawyers could not provide one example of a government employee being the subject of identity theft because the employee’s birthday was public.  It should be noted that the unions do not share the same privacy concerns about the birthdates of registered voters being publicly available or that there are hundreds of websites who list individuals’ birthdays. As is often the case, unions believe there is one set of privileged rules for themselves and a different set of rules for everyone else. (The Stand)

It has taken the Inslee administration over two years and $22 million dollars to separate up to ten patients who have caused injuries to Western Washington Hospital personnel.  This follows criticism of the Inslee administration for the long list of physical attacks on hospital workers.  It is the latest example of the psychiatric facility’s mismanagement, which also caused the hospital to be decertified by the federal government, costing Washington taxpayers $53 million. (Seattle Times)

The Democrat controlled Washington State Senate passed a bill to repeal the state’s death penalty.  Yet the Democrats have done very little to reform the Department of Correction’s medical procedures which have caused the deaths of at least seven prisoners (more than would have been put to death if Governor Inslee had not placed an executive moratorium on using the death sentence during his administration). (Seattle Times)

Republicans offer bill that reduces cab tabs to $30 and replaces lost funds with existing revenue from a new car sales tax.  In an op-ed from Representative Andrew Barkis (R-Olympia) and Representative Bob McCaslin (R-Spokane Valley), the legislators lay out the Republican plan to adhere to the voters’ demand for lower taxes.  The Republican proposal is receiving very little attention from Democrat lawmakers who would rather punish voters for their anti-tax sentiment instead of providing legislation which responds to the public’s concerns over higher taxes. (Spokesman Review/Washington House Republican Caucus)

A study by AAA shows that there has been a significant increase in the number of drivers involved in fatal accidents who have tested positive for marijuana.  The study shows that, prior to 2012, just 9% of fatal-accident drivers tested positive for marijuana, while in the past five years 18% of drivers involved in fatal accidents had marijuana in their system.  The test can only show if the drivers had recently used marijuana and not if they were under the influence at the time of the crash. (KING News)

By a 4 to 1 vote, the Everett City Council prohibited large scale multi-unit “supportive housing” in single family neighborhoods.  These projects, aimed to assist low-income and homeless individuals and families, may still be constructed and operated in areas already zoned for multi-family housing or mixed use. (Everett Herald)

University of Washington Atmospheric Sciences Professor Cliff Mass states there is no need to declare an “emergency” over climate change.  Responding to a current proposal before the City of Everett and other local governments, Mass said, “There is no existential threat to us here, so it’s kind of surprising that people use that language.”  Mass did state, “Climate change is something that is serious. We certainly think that there will be substantial changes by the end of this century if we don’t do anything about what we’re putting in the atmosphere.  But, in terms of being an emergency — which implies that something is going to happen very suddenly and unexpectedly, very rapidly — that’s not correct.” (MyNorthwest)

The Tri-City Herald stated they were “grateful” for Senator Doug Ericksen’s (R-Whatcom County) recent proposal to study the removal of the Ballard locks and the dams that provide electricity to Seattle.  Recognizing the bill is somewhat “tongue-in-cheek,” the editorial stated the legislation’s underlining message that Seattle lawmakers need to be encouraged “to take responsibility for their own salmon habitat” instead of threatening the economic stability of Southeast Washington by tearing down the Snake River dams. (Tri-City Herald)

The current “point-in-time” survey of homeless individuals in Spokane is not asking as many background questions as it has in the past. The federally funded survey is not collecting information on why a person is homeless or where they last resided.  The data from previous surveys was a point of contention during last year’s Spokane mayoral campaign, with candidate Nadine Woodward expressing skepticism over the results. (Inlander) 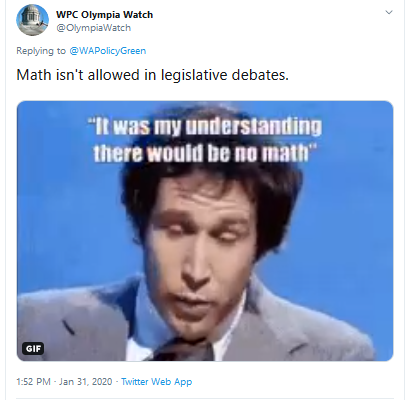