Just as an important legislative deadline approaches in Olympia, Governor Zero hops on a plane to self-promote himself in the nation’s capital.

On Wednesday, Lt. Governor Cyrus Habib got a promotion to sign a proclamation declaring a state of emergency in 19 Western Washington counties due to possible flooding.  Habib, known more for his partisanship than leadership, had this authority due to Governor Jay Inslee being out of state.  We were curious where the often-absent Governor might be in the hours before the important Friday legislative deadline for bills to pass out of committee.  We contacted the Governor’s office and the office receptionist provided the bizarre response that due to “security reasons” they could not reveal Governor Inslee’s location.  It is our assumption that Governor Inslee will be attending the National Governors Association meeting in Washington, D.C., but it does not begin until Friday evening.  It’is probably a good guess that our DC-focused Governor arrived in the nation’s capital early to talk to his national donors and/or continue to promote himself for a position in a potential Democrat administration.  Thus, it appears the sixth-highest paid governor in the country has chosen to leave our state before an important legislative deadline to selfishly promote himself and/or his campaign. This is the type of leadership that has earned Governor Inslee the “Governor Zero” moniker. (Patch and National Governors Association Agenda)

Sound Transit continues to ignore the voter sentiment demonstrated by the passage of I-976 and refuses to support any tax relief that would impact its revenue.  Testifying before the Senate Transportation committee, Sound Transit’s Vice Chairman (and Everett City Councilmember) Paul Roberts stated the agency would not accept any modified revenue plan that does not provide 100% of the revenue currently provided by car tabs.  This arrogant attitude fails to recognize that much of the support for I-976 in the Puget Sound region (especially in Pierce County) was due the financial burden the agency was placing on taxpayers. It will be interesting to see if Democrat legislators accept the marching orders given to them by a city council member, and refuse to abide by the voters’ will. (Everett Herald)

The House Environment & Energy Committee heard testimony Thursday regarding HB 2829, which would declare a climate emergency and empower Washington’s out-of-state Governor to take steps to reduce greenhouse gas emissions.  This is a very curious solution to a “climate emergency,” since Governor Inslee’s emissions reduction steps over the last 7 years have dramatically failed. In fact, greenhouse gas emissions have increased under Governor Inslee’s environmental “stewardship”. (Washington Legislature Bill Summary and Shift)

After nearly a year of stalling, the Democrat-controlled Washington State House of Representatives finally released a summary report of an investigation into former legislator Jeff Morris.  The report, on March 19, 2019, stated that the Mt. Vernon Democrat “often does not communicate clearly, insults and disrespects others, and gives staff the impression that nothing they do is good enough.” Morris, who resigned from office last November, claimed the allegations were politically motivated, but of course this delayed report demonstrates that he was just lying, or perhaps just unable to “communicate clearly” the truth about his pathetic conduct.  The media and the public are still waiting for the House Democrats to release the full report, to gain a better understanding of why Morris was allowed to slink out of his public position without the disgrace he had earned. (Seattle Times)

The King County Council is expected to place a property tax increase on either the August or November ballot to pay for road maintenance. This is one of six new taxes the county is planning for 2020.  If passed, this measure will cost the average homeowner $224 a year.  The county is already threatening to close bridges and let some roads return to gravel if the levy fails.  With progressives’ recent disregard for election results, it is easy to be skeptical that King County Executive Dow Constantine and the liberal councilmembers would accept a negative vote result. Chances are they have already hand picked the Governor Inslee-appointed judge who will overturn the voters’ decision. (Seattle Weekly and Reagan Dunn email)

Due to constant attacks from narrowminded and vindictive elected officials, Amazon will no longer increase the size of its Seattle workforce and instead expand its Bellevue head count to 15,000. Thousands of additional jobs will be created by those who provide goods and services to the company and its employees.  Amazon will also continue to partner with local non-profit organizations to address the regions’ homeless crisis (and achieve far better results than the homeless programs run by the City of Seattle).  As it has done with Mary’s Place in Seattle, Amazon will work with Hopelink to help low income individuals on the Eastside. (Amazon blog)

The South Seattle Crime Prevention Council held a public forum to discuss the growing shoplifting problem that is forcing many merchants to consider closing their businesses.  As expected, Seattle and King County prosecutors failed to take responsibility for not holding or prosecuting repeat offenders.  They incorrectly claim that it was state laws that required repeat offenders to be placed back on the street.  Even though the City of Seattle is willing to spend thousands and thousands of dollars on attorney fees to impose a job-killing income tax on its citizens, and on overturning the voters’ passage of I-976, the city claims it does not have the resources to prosecute shoplifters.  (KOMO)

Representative Joel Kretz (R-Wauconda) has introduced legislation requiring the Washington Department of Fish and Wildlife (WDFW) to place radio collars on two wolves in packs that have been identified as a “problem.”  The collars would enable WDFW to better track the wolves and locate those who attack livestock.  A WDFW spokesperson stated the department is supportive of the bill, yet are asking that placing collars on the wolves be made a “priority” and not “mandated.” (Spokesman-Review)

Former Spokane mayor David Condon will become the Eastern Washington Vice President of Premera Blue Cross.  Condon, who left office about a month ago, will oversee Premera’s strategy for the region and will be based in Spokane. (KHQ)

$740,000 was taken from Benton County in a scam that involved fake invoices and people pretending to represent a construction firm.  Fortunately, only $23,000 was gone before federal authorities were able to seize the bank account where the funds were deposited. A spokesperson said, “The County is currently reviewing our internal policies and procedures to minimize the risk of a similar incident occurring in the future.” (YakTriNews)

While Governor Inslee again shirks his responsibilities here in Washington State to conduct some self-promotion in the nation’s capital, his campaign staff continues to crank out emails that have nothing to do with state business.  Inslee’s latest email talks about immigration and continues the Democrat narrative that there is no difference between illegal and legal immigration.  We suppose it is more convenient for Inslee’s staff to talk about national issues than to run on his own dismal record.  Just consider a few of Inslee’s accomplishments: Inslee’s environmental policies have increased greenhouse gas emissions;  his Department of Corrections’ medical procedures have caused more inmate deaths than if there was not a death penalty moratorium and the state had carried out the scheduled death sentences;  even though he claimed on the campaign trail he would veto any tax increase, he has signed multiple tax increases into law, has proposed tax increases in every budget he has submitted to the legislature,  and hopes to sign many more tax increases in the future;  and lest we forget, Inslee used millions in state funds to pay for his security team during out-of-state trips throughout his failed presidential campaign.  With a record like that, it is no wonder Inslee’s team refuses to talk about state issues. (Inslee Campaign email) 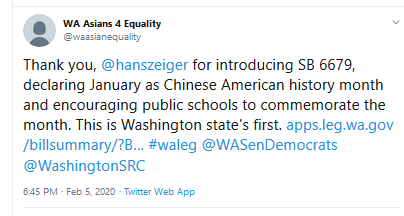