Inslee’s embarrassing tweet about the coronavirus again shows the governor promotes himself above the health and welfare of Washington citizens (and why he has low approval ratings).

This week Shift sits down with Ann Davison Sattler, former Seattle City Council aspirant and current Republican candidate for Washington State Lt. Governor.  Davison Sattler provides her thoughts on Seattle’s Democrat power brokers and their commitment to failed homeless policies, how Republicans are tolerant and accepting, and what it will be like to campaign against the ultra-partisan Cyrus Habib in the race for Lt. Governor. (Shift)

Instead of providing leadership and working with federal authorities, Governor Jay Inslee has chosen to play politics with a virus that could threaten the lives and health of Washington citizens.  In a true classless act, Inslee jumped on Twitter Thursday evening to brag about how he thought he was a tough guy to Vice President Mike Pence when the VP called to seek cooperation in fighting the coronavirus.  Whether it is lying about raising taxes to get elected, unashamedly having Washington taxpayers pay for his security on his failed presidential campaign, seeking to overturn the vote of the people, or now playing politics with public safety, Jay Inslee continues to place his personal needs over the welfare of Washington citizens.  No wonder the Governor has terrible poll numbers. (Twitter)

Democrat lawmakers shot down amendments on their controversial comprehensive K-12 sex education bill that would have allowed local school district to control how the sensitive topic is taught to their children.  Democrats ignored the fact that most Washington communities have different values and cultural environments than Seattle, to pass out of a House committee (by just one vote) SB 5395 that mandates what, when, and how sex education is taught to public school students. The bill, which is slightly different than what was previously passed by the Senate, will now go to the full House chamber, (News Tribune and Washington Legislature Bill Summary)

The five member Washington State Public Disclosure Commission Board rejected a settlement negotiated by the commission’s staff and Facebook and sent the matter to the Washington Attorney General’s office.  Facebook had agreed to a $75,000 fine for not adhering to state election laws on disclosing who bought political ads on its site.  Yet, because the settlement did provide “full compliance” with state election laws, the commission voted to have the AG’s office further investigate the matter. (Seattle Times)

The Tri-City Herald joined the growing list of newspapers who are opposed to Governor Inslee’s Low Carbon Fuel Standard (LCFS).  In an editorial, the paper stated, “We are not deniers of climate change, but we believe ESSHB 1110 is regressive, and delivers too little environmental bang for the buck.”  The editorial explained how LCFS mostly impacts those who are low-income or are on a fixed income due to raising the price on nearly all consumer goods. (Tri-City Herald)

Unincorporated King County has long been one of the last local places where individuals could set off fireworks without a permit.  This will end if a recently introduced proposal is passed by the King County Council.  Councilman Joe McDermott has proposed legislation to make all fireworks, including sprinklers, illegal in the county.  If passed, the law would go into effect in 2021. (MyNorthwest)

The Edmonds City Council is considering proposals to allow for a small hotel to be constructed along its waterfront.  Proponents of the idea say it will bring more business to downtown restaurants and shops and increase the tax revenue for the city.  Because of building regulations and spaces available, any new hotel will likely be no larger than 75 rooms. (Everett Herald)

A three-year federal government study concludes that the four lower Snake River dams should not be demolished.  Following a 2016 federal court order, the Army Corps of Engineers, the Bureau of Reclamation, and the Bonneville Administration conducted a scientific study on the feasibility of removing the dams to increase the salmon population.  The study concluded that dam removal would disrupt the regions’ power supply, increase greenhouse gas emissions, and needlessly destabilize the areas’ economy while providing very little improvement on salmon population. Predictably environmental groups expressed self-indulgent outrage, yet they are silent about why they don’t focus their attention on more productive ways to protect the Puget Sound salmon. (AP/Seattle Times and Washington Policy Center)

The recent short tenure of a Washington State University provost and executive vice president has created concerns about the school’s administration.  Mitzi Montoya lasted just two months in her position before she expressed frustration with the attitude and structure of the university.  Many of the problems revolved around the satellite campuses WSU has in Everett, Spokane, Tri-Cities, and Vancouver.  There also appeared to be problems with the school’s culture, which WSU President Kirk Schulz admitted in an email exchange with Montoya as “different and can be downright bizarre at times.” (Inlander)

Despite his environmental policies increasing the state’s greenhouse gas emissions and his own presidential campaign focused on climate issues being one of the first to drop out of the race, Jay Inslee keeps pushing climate change as the issue that will win the Democrats the White House in 2020.  Inslee’s campaign blasted out another email to whine about the lack of attention being spent on climate change.  The remaining Democrat presidential campaigns continue to ignore the advice from the failed candidate who spent nearly $8 million dollars to reduce his 1% of public support to 0% and stop campaigning five months before a single vote was cast. (Inslee campaign email) 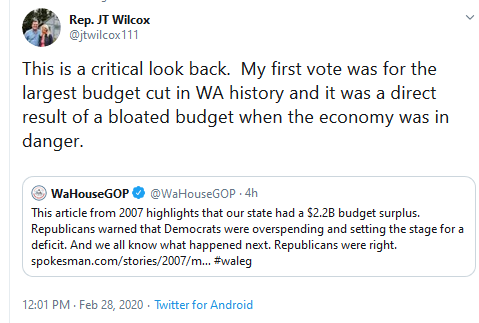 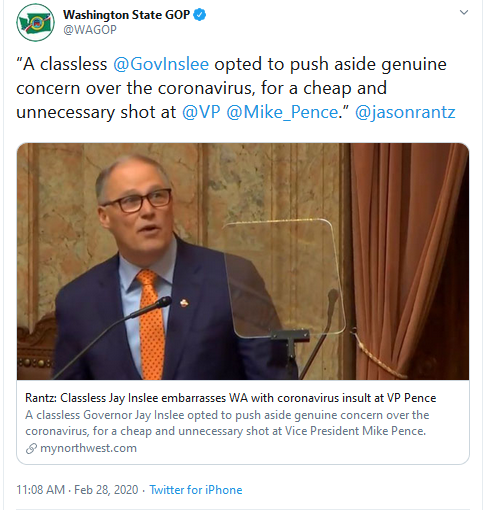