With all kinds of new revenue, state legislators are scrambling to find projects to spend it on.

This week’s Newsmaker Interview is with former Seattle Port Commissioner and 2016 Republican candidate for Governor Bill Bryant.  Bryant shares his thoughts on Jay Inslee’s failed record on the environment, what is needed for Republicans to take back the Governor’s mansion, and Seattle’s impact on the state’s political culture. (Shift)

Lawmakers try to decide how to spend the additional revenue that will available after the legislature removes Boeing’s tax incentives.  Following the news that Boeing wishes to end a trade dispute with the European Union by eliminating some of tax breaks offered the company by Washington State, lawmakers are debating how to spend the expected $230 million windfall in new revenue.  Senator Curtis King (R-Yakima) suggests the state invest $196 million on fish passages to remove some of the financial burden on road and highway projects.  As is typical, Governor Inslee has shown no leadership on this issue, even though using these unexpected funds on his very much late-to-the-party homeless proposal makes more fiscal sense than his “idea” to pilfer money from the state’s rainy-day fund. (MyNorthwest)

In an op-ed, the president of the CleanTech Alliance details the number of successful projects Boeing has taken to improve the environment.  Boeing has worked to reduce fuel consumption and emissions, protect waterways, plant trees, recycle materials, use renewable fuels, and financially support many environmental programs.  While liberal politicians seek headlines promoting expensive environmental measures that always increase the size of the government, but very rarely actually meet the stated goals of said proposals, private enterprise is providing the real leadership in addressing climate issues. (Seattle Times)

Republicans were (initially) successful in stopping gun control legislation that would have banned high-capacity magazines. Representative Jesse Young (R-Gig Harbor) led the action on the House floor (by proposing 120 separate amendments) that caused the legislation to miss the Wednesday legislative cut-off for bills to pass at least one of the state’s two legislative chambers.  Frustrated Democrats proposed a new magazine ban bill late Thursday which includes an additional section on the state buying back ammunition magazines. Because of this fiscal component, the bill sneaks around Wednesday’s deadline.  Even if the bill passes the House, it will likely have difficulties in the Senate. (Everett Herald and MyNorthwest)

A new proposal to allow King County to tax compensation paid by big businesses to those making more than $150,000 is being circulated in Olympia.  It is believed that many big businesses will support the proposal if it contains language banning further local government taxes on companies, like the one currently being promoted by Socialist Seattle City Councilmember Kshama Sawant.  It is interesting to note that in the article our do-nothing governor admits he is not involved in the discussions on a bill being pushed by the Mayor of Seattle and the King County Executive. (Seattle Times)

A homebuilder explains to politicians that the state cannot make homes more affordable while making them more expensive to build.   The 17-year home builder explains why the state should delay implementation of its new Energy Code, which will raise the cost of owning a new home by as much as $30,000. (Lens)

A Thurston County judge found that Tim Eyman has concealed $766,000 in political contributions and that he needs to register as a “continuing political committee” with the state’s Public Disclosure Commission (PDC).   Eyman could be subject to PDC fines totaling $5 million. The ruling came in advance of Eyman’s July trial for improper personal use of campaign funds and failing to report the source of campaign donations. (Seattle Times)

The Pierce County Council will once again attempt to raise the sales tax to pay for behavioral health services.  The proposal would raise the county sales tax one-tenth of one percent (1 penny for every $10 spent). Because it is a tax increase, the council will need to obtain approval from five of the seven councilmembers at its March 10th meeting.  The council failed by one vote to pass a similar tax increase for mental health services in 2016. (News Tribune)

Governor Jay Inslee will take a break from travelling to other states, and mostly ignoring this year’s legislative session, to make a rare appearance in Eastern Washington.  The governor’s office said Inslee will fly into Walla Walla next Tuesday to view flood damage that occurred two weeks ago. Maybe he’ll take the chance to ask locals how they feel about the removal of the Snake River dams, which aren’t that far from where he’ll be staging his photo opportunity. (YakTriNews)

There are news reports that containers of frozen beef, chicken, and pork are sitting in Chinese ports due to travel restrictions enacted because of the coronavirus outbreak. The ports are running out of electricity to operate the containers’ refrigeration units.  This is disappointing news for Washington meat producers, who were previously benefiting from a record year of imports into China because of the African Swine Fever outbreak which decimated Asian hog herds. (Washington AG News) 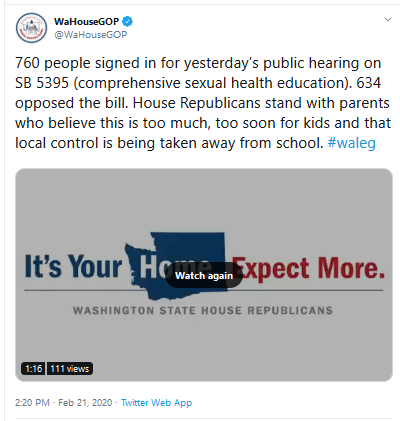 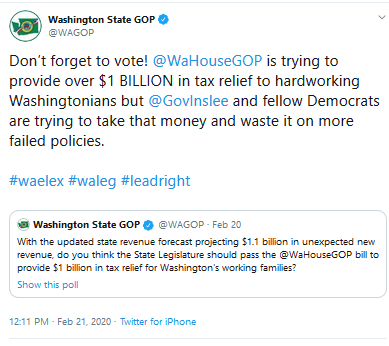