While Governor Inslee brags that his failed presidential campaign raised the urgency of climate issues, polling data shows it is still at the bottom of voters’ concerns.

Why don’t liberals understand that it’s their policies that have caused the housing crisis in Seattle and King County???  Over-regulation and bureaucratic red tape have dramatically increased the cost of home construction and thus increased housing costs. This has impacted middle- and low-income families the most, forcing many out of the market.  Common sense reform, like those recently proposed by Challenge Seattle, are needed. (Shift)

While Governor Jay Inslee continues to give himself credit for raising the awareness of climate issues in our country, data continues to show the public ranks it near the bottom of their concerns.  Pew Research polling results for the past two decades show that out of 18 issues, climate change continues to rank second-to-last on the issues our lawmakers should focus their attention. Once again showing, our governor has a very inflated view of his relevance on the national stage, and a very small advocacy impact on his chosen issue. (Pew Research/Climate Depot)

The Washington State Supreme Court ruled that the deceptive 2015 legislation that allowed Sound Transit to increase car tabs was constitutional.  In a 7-2 ruling, the court decided that Sound Transit could use an over-inflated vehicle depreciation schedule to determined car-tab taxes. The ruling increases the belief that the liberal court is determined to promote the progressive political agenda (hello state income tax!) and is willing to ignore constitutional safeguards designed to protect Washington citizens and taxpayers. (News Tribune)

The Walla Walla Union-Bulletin condemns the Democrat-controlled legislature for failing to even hear – let alone pass – legislation that would ban “title-only” bills.  Title-only bills are used by legislators to get around constitutional mandates for public hearings on legislation. The editorial noted, “It’s telling that the effort to end the “title-only” practice was not even debated in a committee. Legislative leaders apparently are not eager to defend the practice in the open, which would then give the people an opportunity to comment.” (Walla Walla Union Bulletin)

Representative Jacquelin Maycumber (R-Republic) has successfully ushered a bill through the House Appropriations Committee to provide law enforcement officers improved access to programs which assist them in coping with the stress of their jobs.  Many large police forces have excellent programs that are simply not available to smaller departments, which Maycumber’s bill would help change.  It now awaits a vote before the full House of Representatives. (Maycumber Media Release)

The nation’s second-largest local newspaper chain, the McClatchy Company, filed for bankruptcy and the courts will decide if a hedge fund management firm will become the new owners of papers across the country. The Bellingham Herald, The (Tacoma) News Tribune, The Olympian, and the Tri-City Herald are among the 30 daily newspapers owned by McClatchy.   The company released a statement saying that pension obligations owed to current and former employees forced this move.  The statement also said that prospective new owner, Chatham Asset Management LLC, “have expressed support for independent journalism.” (McClatchy)

A Seattle Times editorial states that sports betting should not be confined to tribal properties and that private enterprise should be allowed to compete in the market.  The Times noted that the two bills that are moving forward in the legislature only allow tribal casinos to participate in the new gambling opportunity of betting on sporting contests.  Democrat lawmakers provide the incredibly shallow and self-serving argument that by confining sports betting to tribal operations the state will restrain the spread of gambling addiction.  The real reason for allowing only tribes to profit from sports betting is because Native American entities are large contributors to Democrat campaigns and fund many liberal special interest groups, and they are pulling the strings on their Democrat puppets to give them a lucrative monopoly. (Seattle Times)

A Metro King County Council committee supported a plan that would provide free passes to low-income individuals to ride the Metro buses.  Those with annual incomes of less than 80% of the nation’s poverty level ($21,000 for a family of four) would receive a free yearly pass.  It is estimated that 54,000 individuals would qualify for this program if the full council approves the plan.  The initial annual cost for the program is estimated to be $10 million dollars.  Yet, as we have seen from other local free government programs, actual participation and costs tend to be far higher than originally stated by liberal entities. And, of course, it would allow the transit agency to claim even more riders, if they give their service away free. (Seattle Times)

The clean-up of the homeless encampment in Tacoma’s People’s Park has thus far cost the taxpayers nearly $30,000.  The park housed approximately 70 tents before the city closed the park for three weeks to remove garbage and repair landscaping.  More repair work will need to be completed once the weather has improved.  (News Tribune)

In sharp contrast to the vindictive attitude toward business that spews out of Seattle City Hall, Bellevue’s elected leadership is far more welcoming to job creators.  When asked if she thought Amazon was a “villain,” Bellevue Mayor Lynne Robinson responded, “I don’t think any of our businesses are villains and we collaborate with our businesses.” The mayor, who is chosen by her fellow council members for the largely ceremonial job, went on to say most companies are interested in how they can help their community.   Given the differing attitudes towards the business community, is it any wonder that Amazon is planning to put 15,000 employees in Bellevue in the coming decade.? Also, what city leadership is providing more opportunities for its citizens? (KING5)

While polling data is not available to analyze, it is not difficult to determine why so many school bond levies failed in Snohomish County this week.  As Jerry Cornfield points out, voters are tired of their taxes being raised and government officials doing a poor job of managing their finances. (Everett Herald)

An investigation by the Washington State Auditor’s office found that Washington State University employees profited by misreporting their work schedules.  The initial audit found employees failed to report times they were on leave, while other employees overstated the number of hours they had worked.  The auditor’s office recommended that the university needs to strengthen its oversite of employee’s reports. (Moscow-Pullman Daily News) 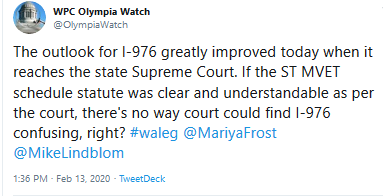