After years of defending the State Democrats’ caucus system for selecting their presidential nominee, Governor Jay Inslee is now demanding that every state use a primary.

Governor Jay Inslee’s latest act of hypocrisy is to call for the end of caucuses to select future Democrat Party presidential nominees.  In an email to his contributors, Inslee states, “For parents of young children, or people who don’t work typical 9-5 jobs, or deployed military, or even just folks who can’t make it during that EXACT window to caucus, caucuses exclude them or — at the very least — make it very difficult for them to participate.” The precise same concerns were vocalized in 2016 when Inslee and his cohorts at the Washington State Democrat Party refused all demands to do away with the caucus.

The reason Inslee and the Washington State Democrats chose a primary method for 2020 is they knew Bernie Sanders’ followers would out-organize Inslee’s campaign in a caucus system, which would have been an embarrassing blow to the governor (if he hadn’t embarrassed himself so much earlier by dropping out of the race five months before any votes were cast).  Inslee is now attempting to appear as the agent of change in making his demand to do away with caucuses.  Yet, the reality is that Inslee and his Democrat power broker friends resisted this change for years in Washington State.  We will now see if Democrats around the country will again ignore Inslee’s demands – just as they have ignored his extreme climate change agenda. (Inslee for Governor email and US News & World Report)

King County judge rules in favor of Washington voters and has denied the Democrats’ legal challenge to the passage of I-976.  In the on-going court battle over whether voters knew what they were doing when they voted for lower car tabs, King County Superior Court Judge Marshall Ferguson ruled that King County and the City of Seattle failed to prove that I-976 was unconstitutional.  We can expect the Democrats will continue to spend taxpayer money to appeal this decision because, after all, it’s not their money they’re wasting. (News Tribune)

While liberals claim they are for immigrants and workers, Democrat legislators just killed a bill that would have removed roadblocks for these individuals to practice their trade.  The House Consumer Protection and Business Committee unanimously passed HB 2355, which would allow individuals to display competency to obtain an occupational license instead of going through the expense and time of dubious state-mandated training.  There are thousands of individuals, many of them immigrants, who have learned skills elsewhere and would benefit from removing the unnecessary barriers which prohibit them from practicing their trade.  Yet, due to organized labor’s need to control those who enter certain professions – and organized labor’s control over the Democrats who control the legislature,, the House Appropriations Committee killed the bill. Workers of the world unite – indeed. (Washington Policy Center and Washington Legislature Bill Summary)

Environmentalists demand that the rest of us to change how we work and live if we want to save the planet, yet they refuse to make these same demands on those who are their political allies.  The environmentalists’ hypocrisy is in full display in the recent story where they support the hotel workers union’s demand to eliminate Marriott hotels’ successful “Make a Green Choice” program.  The union wants to increase their workers’ hours by having them waste power and water by unnecessarily cleaning rooms, and changing linens and towels, of guests who stay longer than one night but don’t need the room cleaned during their stay. (American Council on Science and Health)

Even though this one wacky liberal idea has died in the Washington State Legislature, we are confident we will see similarly extreme proposals in the future.  Representative Nicole Macri (D-Seattle) proposed a bill that would have prohibited fossil fuel-powered cars from being sold in Washington State by 2030.  By reducing the options Washington consumers have in their car purchases, the legislation would have made it more expensive for people to live and work in the state.  This would have impacted low-income workers the most, since a higher percentage of their income is tied to transportation costs.  Fortunately, this bill failed to make it out of committee by last Friday’s deadline.  (The Lens)

An Everett activist is working to ensure that any financial penalty the state receives from lawsuits against opioid manufacturers goes towards fighting the opioid crisis.  Lindsey Greinke Arrington is promoting bi-partisan legislation (HB 2786) which will earmark money received from current lawsuits for treatment and prevention programs, and not into the state’s general fund to be wasted by the Democrats who control the state’s purse strings. (Everett Herald and Washington Legislature Bill Summary)

Seattle City Councilmember Kshama Sawant admitted her office violated city ethics regulations and Seattle election laws when her office used government resources (i.e., taxpayer funds) to promote a ballot measure.  Despite admitting guilt, Sawant spewed some serious ignorance in a prepared statement: “I’m disappointed to see this complaint filed against my office and our movement. It’s shameful that while big business has license to run amok trying to bully or buy politicians … working people have to follow the most onerous of restrictions.”  It is interesting to see the wealthy Sawant categorize herself as a “working” person, all while pretending that her desire to impose a vengeful tax on Seattle employers is not a perfect example of “bullying.” Additionally, the “restrictions” she ignored are not “onerous” at all – how hard is it to understand that you can’t spend taxpayer funds on your personal political projects? (Seattle Times)

Councilmember Sawant unveiled the broad details of her latest vindictive tax against Seattle employers.  Sawant’s job-killing proposal would tax approximately 825 Seattle companies 1.7% of their payroll (thus making it more expensive to hire new employees and provide current employee’s with pay raises).  Sawant estimates that $300 million would be raised and, after city hall and government employee unions take their (undefined) substantial cut off the top, 75% of the remaining proceeds will go toward “building affordable housing” (which government actions have made more expensive and less attractive for private companies to consider) and 25% will go towards converting gas-powered homes to electric (which the city mandated last year and many home owners have already paid for). (Seattle Times)

The City of Lakewood is considering restricting firework displays to just July 4th, even though many believe it is difficult to enforce a ban on the other days of the year.   In an editorial, The News Tribune suggested an intrusive “Big Brother” approach to catching those who violate city fireworks’ laws.  The paper suggested, “Why not deploy those unmanned drones to catch fireworks scofflaws, as some communities have done? High-tech surveillance might lead to deterrence.” (News Tribune)

Centralia voters reacted to the school district’s recent 24% teachers’ pay raise by overwhelmingly voting “No” (70%) on the school levy.  Voters expressed their frustration with district administrators and the teachers union over the contract, which has caused financial difficulties for the school district.  It should be noted that this is also the same district where the Washington Education Association spent nearly $100,000 last November to remove a school district board member (Jami Lund) who spoke out against the contract. (Centralia Chronicle and Shift Newsmaker Interview)

East Wenatchee’s Pangborn Airport had a record-breaking year in 2019, as Alaska Airlines increased its number of flights into the facility. The airport is currently seeking an air carrier willing to invest in non-stop service from the San Francisco Bay area. (IFIBER One)

The Grouse Flats wolf pack is suspected in another attack on livestock in Southeast Washington. The Washington Department of Fish and Wildlife (WDFW) say this is the fifth depredation attributed to the pack in the past seven months. WDFW states they will use non-lethal methods to protect other livestock from future attacks. (Washington AG Network) 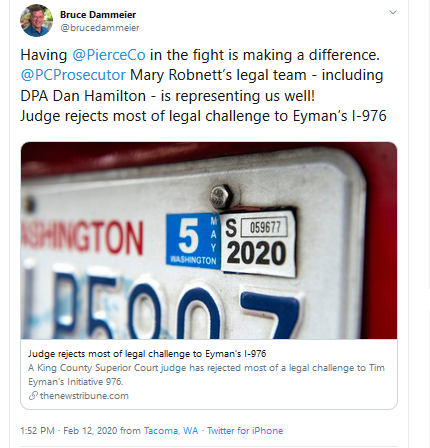 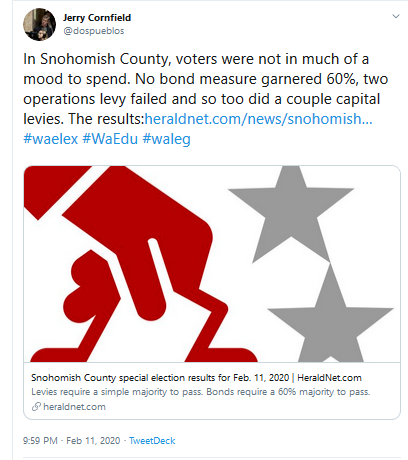