Workers rejoice as the City of Seattle’s attempt to establish an illegal income tax and circumvent the state constitution fails, as the Washington State Supreme Court refuses to overturn the previous decision against the city. 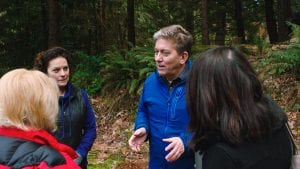 Respected attorney and community leader Mike Vaska announced he is running to become Washington State’s next Attorney General.  In contrast to the ultra-partisan activities of the current AG, Vaska is running on the theme that he “is a professional lawyer and not a professional politician.”  In his interview with Shift, Vaska outlines why he is running for Attorney General, the use of taxpayer money to file partisan lawsuits against the Trump Administration, and the lack of leadership from the current AG on the homelessness issue. (Shift)

The Daily Briefing will be promoting online gatherings for campaign kick-offs, policy seminars, town halls, fundraiser, etc.  If you have an upcoming “virtual” event you would like us to promote, please provide to us (email: [email protected]) all the pertinent information. Thank you!

In a devastating blow to liberal proponents of the state income tax, the Washington State Supreme Court refused to hear the lawsuit against the City of Seattle’s tax on “wealthy” residents.  This decision allows the previous rulings from the King County Superior Court and the Washington State Court of Appeals to stand, leaving in place the determination that Seattle’s income tax legislation was unconstitutional.  Progressives, who always desire larger and more expensive government, had sought to use the liberal court system to get around the voters of the state, and not try to pass a constitutional amendment to force an income tax on Washington residents.  Note: It will be interesting to see how much taxpayer money the City of Seattle wasted retaining high-priced attorneys and consultants (and also staff time) in this failed attempt to impose an income tax that they knew was unconstitutional.   (Washington Policy Center)

Predictably, former Democrat King County Executive Ron Sims suggest the legislative result of COVID-19 should be “bold new policies,” which is a euphemism for larger and more expensive government financed by new revenue streams like an income tax.   Sims, who has long been an advocate for a state income tax (it was part of his platform in his failed 2004 gubernatorial campaign), uses the coronavirus outbreak as just another excuse to promote a liberal agenda. We can expect to see more of this in the coming weeks, as the liberals’ go-to solution to the current health crisis (and, in fact, their solution on any day when the sun rises) is to raise taxes. Even when the working people and businesses they claim to care about are facing such great uncertainty. (Crosscut)

House Republican Leader JT Wilcox, responding to the sentiment that the Washington legislature needs to immediately reconvene to pass emergency legislation, says it is best to wait until more is known about state revenues and the impact of federal money.  Wilcox is also concerned that Democrats will use the special session to pass partisan and/or expensive legislation that failed during the regular session. (Wilcox Facebook post)

In more bad news for liberals who support bigger and more expensive government (and thus good news for working families), the Puget Sound Clean Air Agency is “suspending any action” on implementing its costly and ineffective Low Carbon Fuel Standard.  Even in defeat the agency did provide a path for how it could resume consideration on raising energy prices for residents of King, Kitsap, Pierce, and Snohomish counties. The agency states, “If relevant state legislation is enacted or there is a clarification of the Washington State Supreme Court’s recent ruling on the Washington State Department of Ecology’s Clean Air Rule, the Agency will evaluate the implications of those developments on a draft rule.” Eternal vigilance remains an essential activity when bureaucrats have an eye on your wallet. (Puget Sound Clean Air Agency announcement)

The City of Seattle, just 24 hours after saying it was still doing parking meter enforcement, reversed its decision and announced it would no longer ticket those who failed to pay parking fees.  The city is still policing violators who park illegally or in restricted zones, but says it will no longer ticket parking meter violators “until further notice.” (MyNorthwest)

Many Food Banks are doing more with fewer volunteers.  The charities have seen a reduction in the number of volunteers, because many are seniors and they are staying home.  If people are younger and healthy, they can contact local banks to see if there are opportunities to volunteer. (Spokesman-Review)

Numerous rural hospitals are turning away elective and non-emergency procedures due to the coronavirus, meaning most are experiencing reduced revenues.  Rural facilities are often not part of a larger corporation with significant financial reserves, and thus are dependent on steady revenue to meet payroll and other regular expenses.  122 federal lawmakers are asking the Trump Administration to provide financial assistance to keep rural medical centers open. (Washington AG Network) 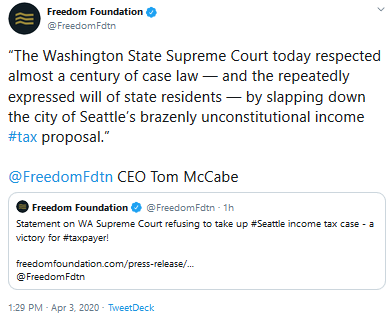