Retailers and restaurant operators are waiting to see if Governor Inslee will once again change the methods for determining activity levels in counties.

Several major Washington State counties are awaiting word on whether they will take another economic punch to the gut and be moved back to Phase 2 next week – or if Governor “Random” Jay Inslee will again decide to change his definition of the “science” that determines the level of activity which he permits in each county under his “emergency orders”.  Six of the state’s 10 largest counties are currently in danger of having more economic restrictions imposed , including King, Snohomish, Thurston, Benton, Yakima, and Spokane.  There are many in those counties who hope the governor will once again simply get tired of his current “science”, and come up with some new “science.”

Earlier this month, many counties had exceeded the limits for EITHER the number of new COVID-19 cases OR hospitalization rates, when only one was needed for a county to be moved back to Phase 2.  When asked on April 8th if he might change the requirements, the governor said, “whatever happens, this will be dictated by the numbers,” and “It’s the virus’ numbers that direct these decisions at this point. We just have to take this virus seriously.” Then hours later, just before announcing which counties would be returned to Phase 2. Inslee haphazardly decided to change the “science,” and announced that counties had to exceed the limits for BOTH the number of new cases AND hospitalization rates before he would punish them.

This allowed Democrat-controlled King County to remain in the more economically advantageous Phase 3, but returned Republican-led Pierce County to Phase 2. Of course, after this long under Inslee’s martial law, few people could tell you what the difference in phases means (unless they owned a restaurant, or were planning a wedding). It is worth mentioning that many of the counties which benefited from Inslee’s previous alteration of “science” are, some three weeks later, again on the verge of returning to Phase 2 (unless Inslee again decides to change the “science”. “Random Jay” retains that power thanks to Washington State Democrat legislators refusing to hold the governor accountable through a modest bit of the same legislative oversight which nearly every state in the country has implemented on their governors’ emergency powers). (Northwest Public Broadcasting, MyNorthwest, and Governor Inslee media release)

There are indications that many restaurants will not comply if Governor Inslee decides to order them to once again restrict the number of customers they are allowed, just as more people are resuming their habit of dining out.  Many establishments have experienced unpredictable fluctuating capacity levels for more than a year, and have made numerous costly modifications to comply with the state’s latest random guidelines.  It is understandable that many restaurant operators are frustrated by Governor Inslee’s often unscientific (and often partisan-inspired) actions, and that they are constantly forced to take the financial pain of following his edicts. (KOMO News)

The Seattle Times’ Denny Westneat discusses the sad reality that the Democrat-controlled legislature just completed a legislative session forcing the failed liberal policies of Seattle onto the rest of the state.  From enacting public safety policies that rewarded liberal rioters, to imposing job-killing taxes which encourage employers to relocate (and keep others from moving in), to imposing expensive and inefficient environmental policies, the Democrats in Olympia have imposed on the rest of Washington’s residents the same failed policies so familiar in the state’s biggest city. You know the ones, which have turned the once “Most Livable City” in America into a decaying den of homelessness, drug use, crime, and “governed” by a financially irresponsible city government.  The reality is the legislators from Seattle do not have the votes on their own to screw up state policies this badly, so they needed the help of Democrat lawmakers from around the state. While these Democrat legislators hailing from swing districts will always proclaim on the campaign trail that they are not as liberal as their fellow Democrats from Seattle, once they arrive (even virtually) in Olympia, this year they voted for the same ultra-liberal legislation.  If moderates/conservatives want to stop the destructive radical policies of Seattle from destroying Washington State, their best strategy is to remove the non-Seattle Democrats who march lockstep with Seattle liberals in the legislature. (Seattle Times)

Thus far two lawsuits have been announced against the unconstitutional state income tax on capital gains, which was passed by the Democrats during the last weekend of the just-completed 2021 legislative session.  The conservative advocacy group Freedom Foundation filed a lawsuit in Douglas County Superior Court on Wednesday.  In its media release, Freedom Foundation CEO Aaron Withe stated, “How many times do we have to go down this road? Capital gains are clearly income. And when you tax them, it’s an income tax — no matter what you choose to call it.”  The group already behind a legal challenge of Seattle’s unlawful income tax, the Opportunity for All Coalition (OFAC), also announced on Wednesday that it will be filing a lawsuit. OFAC President Collin Hathaway said, “Washingtonians have rejected income tax measures 10 times before. The state’s constitution clearly prohibits this type of tax, something that its supporters know. On top of that, it is totally unnecessary given current state budget surpluses, and will only serve to inhibit job creation and economic prosperity.”  (Seattle Times, Freedom Foundation media release, and Opportunity For All Coalition website)

Even Democrat legislators are saying “it’s still a joke” at Governor Inslee’s Employment Security Department (ESD).  Those were the words used by Representative Gerry Pollet (D – North Seattle) to describe his recent experience dealing with ESD’s website. Yet, despite the many expensive management failures at ESD, legislative Democrats failed to support Republican efforts to investigate the dysfunctional department or pass legislation to clean up the mess Jay Inslee’s appointees have made of it. (KING5 News)

A Seattle chocolate shop refused service to Seattle police officers. Two uniformed officers stopped in the Chocolati shop in Wallingford on Tuesday and were first ignored by an employee. When the officers obtained their attention, the employee said, “No, I won’t serve you.” Other Seattle police officers also claim that the Chocalati location at Green Lake has also refused service to uniformed law enforcement personnel. These leads us to wonder if the ACLU and Washington State Attorney General Bob Ferguson will soon be filing lawsuits against Chocolati, as they did with zeal attacking Richland flower shop Arlene’s Flowers, which refused to provide flowers for a same-sex wedding, claiming a religious objection.  Remember, Ferguson took the unusual step of arguing the case himself, to ensure maximum publicity, instead of allowing a more competent lawyer to do the work.  It will be interesting to see if the far-Left AG feels that he should fight for the same rights for police officers that he did for a gay couple. (The Post Millennial,  Wikipedia, and Attorney General Bob Ferguson statements on Arlene’s Flowers lawsuit)

“Unhygienic living conditions, close quarters, poor access to sanitation and hygiene” are causing the infectious disease shigella to spread throughout Seattle’s homeless encampments.   So far nearly 150 cases of shigella have been confirmed, and many more which have not yet drawn medical attention have likely occurred of this disease which causes digestive problems.   Meanwhile, Seattle’s liberal establishment refuses to prohibit these illegal encampments or institute measures to encourage people to seek treatment for the drug addiction or mental issues which causes the vast majority of them to live this cruel street existence. (KOMO News)

Wenatchee area health officials are optimistic that both Chelan and Douglas counties will not be punished further by Jay Inslee. In mid-April, both counties were close to number of new cases and hospitalization rates which would have required them to move back to something called Phase 2, but over the past couple of weeks the situation has improved, and both believe they have enough margin to be cleared next week to stay in Phase 3.  Chelan and Douglas counties were among the five Central Washington counties that were stuck in Phase 1 under Governor Inslee’s first “re-opening plan,” before he figured out his errors, and allowed some economic activity in these Republican strongholds. (Wenatchee World) 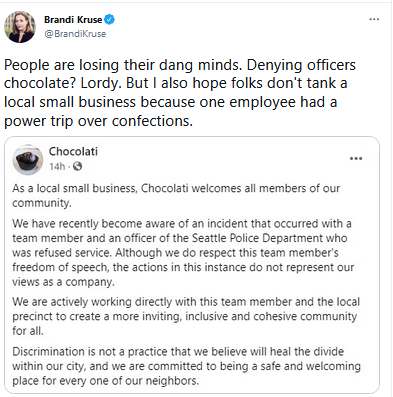