As predicted, a lawsuit was announced today against the state income tax on capital gains that was passed by Democrat lawmakers.

As predicted, a lawsuit will soon be filed to challenge the constitutionality of the state income tax on capital gains that was passed last weekend by the Democratic controlled legislature.  A statement from the non-profit group Opportunity for All Coalition (OFAC) was released this afternoon and stated, “The Opportunity for All Coalition plans to file a lawsuit against the recently passed statewide capital gains tax – which looks a lot like a state income tax. Washingtonians have rejected income tax measures 10 times before. The state’s constitution clearly prohibits this type of tax, something that its supporters know.  On top of that, it is totally unnecessary given current state budget surpluses, and will only serve to inhibit job creation and economic prosperity.” OFAC, led by former Washington State Attorney General Rob McKenna, previously challenged the City of Seattle’s income tax attempt. (OFAC Media Release)

While the media appears to constantly be seeking out stories to tell of racism and inequality, they ignored a legislative story this weekend in which funding for minority students was slashed by the Democrat lawmakers.  Here’s the sad background – because the union bosses at the Washington Education Association (WEA) do not control all aspects of public charter schools, they have been able to force Democrat lawmakers to deny the schools a portion of the state funding which other public schools receive.  Despite charter school families paying the same taxes as other parents, their schools have been denied local levy funding traditional schools receive.  This discrimination means charter schools receive between $2,500 to $3,000 less per student than other public schools.  Charter schools have a strong appeal in lower income and minority neighborhoods, as parents seek a better educational experience than the dismal one often offered by the public schools in their communities. Some 60% of charter school students are either Black or Hispanic, or come from low-income households.

To make up for this funding disparity, Representative Skylar Rude (R – Walla Walla) and Representative Drew Stokesbary (R – Auburn) were successful in including in the House budget $1,550 for each charter school family.  Yet when Democrats went behind closed door to work out the final budget package, they followed the orders of the WEA bosses and cut this funding for low-income families and ethnic students.  This is yet more proof, that the Democrats and the teachers’ union only care about “equity” when it means either a larger government or more money for union bank accounts and not when it actual improves the educational opportunities of those seeking a better life. It is a shame the local media fails to bring public attention to this hypocrisy. (Washington Policy Center)

Representatives Drew MacEwan (R – Union) and Mike Chapman (D – Port Angeles) stated that many of Governor Jay Inslee’s numerous failures during the pandemic were caused by the lack of legislative oversite and provide additional reasons for why the state still needs to change the laws regarding the governor’s emergency powers. In a bi-partisan Seattle Times op-ed, the two legislators noted Inslee’s colossal management failure at the Employment Security Department (with more than $1.1 billion stolen from taxpayers) and the poor rollout of the COVID-19 vaccine last December and January (when Washington State’s “performance” was repeatedly ranked among the worst in the country) as two of the many examples for why elected legislators need to be involved in decisions which impact millions of people’s lives.  The two representatives argue that once an initial emergency has passed, government actions are only improved once they have been “vetted, debated, and refined through a process that included the public.”  Despite Democrat lawmakers repeatedly killing legislation (like HB 1577) which would have allowed legislative oversite of the emergency powers process, the two representatives wrote that they will continue to push their reform bill during the 2022 legislative session.  It is noteworthy that Democrat legislative leaders think so little of their fellow legislators that they prohibit them from being involved in major policy decisions, abdicating their constitutional responsibilities in favor of the undemocratic one-man rule we now “enjoy”. (Seattle Times and Washington Legislature Bill Summary)

You gotta love campaign launches! That is when we get to catch a glimpse of just how detached from reality the intra-party battle between Dow Constantine and Joe Nguyen will become on the very first day of their contest for King County Executive.  Instead of focusing  on promoting solutions for the region’s rampant homeless problem, or the associated drug and crime epidemics, or on the county’s multiple failures to reach climate goals, or the numerous times King County’s West Point water treatment facility has dumped pollution into Puget Sound, or helping small businesses struggling to stay open (and pay employees) after more than a year of random government-imposed restrictions, Senator Nguyen thought his primary qualification for the job was to demonstrate how more “woke” he is than incumbent Executive Constantine.

Following Sen. Nguyen’s announcement that he was challenging the three-term incumbent from his own Democrat Party, Constantine immediately blasted out an urgent fundraising email to his supporters claiming he needs to raise cash to run TV ads because a “freshman” senator had announced his candidacy.  Nguyen immediately tweeted a portion of the fundraising email and proclaimed he does not use the term “freshman” because it “is a word rooted in sexism.” Thus while the people are tired of the repeated failures of the local liberal political establishment, the battle over who will lead the largest local government will evidently be determined by who can waste more money paying off liberal special interest groups and who is the most up-to-date on the ever changing “woke” vocabulary. (Joe Nguyen Twitter and Dow Constantine fundraising email)

As gun violence continues to skyrocket and 911 response times continue to worsen, many members of the Seattle City Council want to take the money saved from more than 250 well-trained officers departing the Seattle Police Department (193 in 2020 and approximately 60 so far in 2021) and hand it to liberal special interest groups with no experience in preventing or solving crimes.   The King County Prosecutor’s office revealed that fatal shootings have increased 34% compared to the previous four years, and that the increase in violence has disproportionately impacted people of color. Because of the mass exodus of officers, due in large part to a lack of support from Seattle’s elected officials, the city has saved nearly $13 million. Members of the council now want to have that money included in their “participatory budgeting process” (i.e. the latest liberal scheme to reward their campaign supporters with your tax dollars).  Interim Police Chief Adrian Diaz unfortunately was unwilling to stand up for the need for more officers, saying instead the department could use the money to pay for “separation pay” (unused vacation and sick time) and hire non-uniformed personnel. (KOMO News, Q13 News, and MyNorthwest)

As the liberal Seattle School Board refuses to clear a large homeless encampment near a school, the students were placed in lockdown after security officers witnessed a man with a gun.  All the students were locked in their classrooms as police rushed to the scene and located the weapon (which turned out to be a pellet gun).  One can imagine the massive distraction this episode caused for both the teachers and students at Broadview-Thompson School near Bitter Lake in North Seattle. Police stayed on the scene until all students had left the property. The homeless stayed on the scene as well, since the Seattle School Board members prefer they live on school property as opposed to relocating them to shelters. (MyNorthwest)

The COVID-19 pandemic has had radically different impacts on two major Western Washington employers. Boeing announced it lost $561 million during 2021’s first quarter, as domestic air travel is still less than 50% of what it was in 2019, and international travel is still at 11% of 2019 levels.  Meanwhile, Microsoft continues to meet consumer demands for cloud technology and remote office software, and as a result announced a 38% increase in its first quarter profits over last year.  Microsoft’s stock has increased 58.2% since February 28, 2020, while Boeing’s has decreased 11.9% during the same time.  Yet good news for Boeing investors is that the company’s stock has rebounded considerably since March 20th of last year, when it fell 65.5% in just three weeks. (Seattle Times and iFIBER One/AP)

The Battle Ground Public School Board (in Clark County) approved a plan to reduce staff numbers by nearly 60 people due to decreased student enrollment.  Reductions in students, and the loss of state and federal funds connected to enrollment, will be a major challenge for many school boards across the state.  As more parents have become upset with the state schools’ unpreparedness for distance learning, and then the unnecessary teacher-union-caused delays in returning students to in-person instruction.  These frustrations have led many parents to seek alternative methods (private schools, home schooling, and online schools) to educate their children. (Vancouver Columbian)

The Washington State Auditor’s office revealed an investigation which found that Thurston County paid a “division director” more than $5,000 for work not performed.  The person was terminated last June, after it was revealed they had handed in timecards for at least 104 hours they had not worked.  The county did not reveal in which department this took place, or what supervisor approved the original timecards. (The Olympian)

Washington State University is requiring all students and staff members to be fully vaccinated before the start of Fall classes in August.  WSU has been the center of many COVID outbreaks during the past year, and at one-point last August, Pullman had more new cases per capita than any community in the country.  Students will need to provide proof of their vaccinations in order to attend in-person classes and other student activities. (Q13 News)

Supporters of a recall campaign against Benton County Sheriff Jerry Hatcher have turned in more than 16,000 petition signatures to the county auditor’s office.  Only 13,937 valid signatures are needed to place the issue before the voters.   Hatcher is accused of intimidating and retaliating against witnesses and public servants in investigations, tampering with physical evidence, and violating his oath of office. If enough of the submitted signatures are determined to be valid, then the voters will decide Hatcher’s fate either on the August primary ballot or in a special election. (Tri-City Herald/MSN) 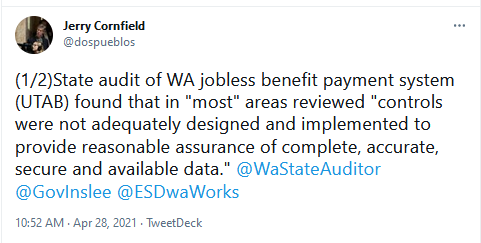 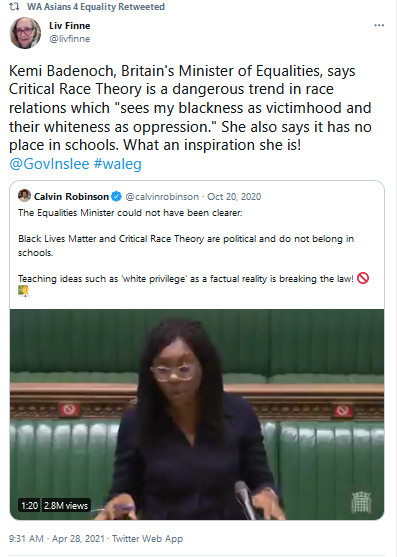