On Earth Day it is smart to remember that government almost always falls way short of the environmental promises made by liberal politicians.

Former two-term state representative (and current flak for local uber-liberal pontificator Nick Hanauer) Jessyn Farrell is again running for Seattle Mayor, and in typical Seattle fashion, she is offering liberal special interest groups a bunch of free items to buy their votes.  In 2017, Farrell managed to get 12% of the vote when she ran for mayor.  To increase her vote total in this year’s campaign, Farrell is using taxpayer dollars to buy the votes she needs to win. “It seems in this campaign that former state representative Farrell will rarely miss an opportunity to commit more of your tax dollars to expanding government programs and making government more intrusive (except when it comes to public safety).” (Click to read full Shift article)

The Washington State House of Representatives passed the Democrats’ state income tax (on capital gains) and since the Democrats know the public hates the unconstitutional tax, they snuck in language to prevent a citizen’s referendum to repeal the measure.  While 49 other states, the IRS, and the Congressional Budget Office categorize a capital gains tax as an income tax (which is unconstitutional in Washington State), Washington Democrats remain the only legislators in the country who believe it is an “excise tax.” Also noteworthy is that the local media never mentions how isolated the Democrats’ interpretation is on this tax, since they agree with it. The bill (SB 5096) which passed House yesterday is different from the version passed by the Senate (most notably, the phony “emergency” clause which prohibits a citizens’ referendum), so the House version will now be sent back to the Senate for yet another vote. (Seattle Times, Washington Policy Center, and Washington Legislature Bill Summary)

The Washington State Department of Health (DOH) supports a discriminatory process which denies access to the COVID-19 vaccine based on skin color.  The African American Reach and Teach Health Ministry (AARTH) is a provider of taxpayer-funded vaccines and operates an online scheduling system on which those seeking an appointment must identify whether they are white or a person of color.  If the vaccine-seeker classifies themselves as being white, they are immediately placed on standby, while those classifying as people of color proceed to schedule their appointment.   When asked about such racially profiling tactics, an AARTH spokesperson stated they receive government funding because they “reach people of color.” When asked if the AARTH approach is discriminatory, the spokesperson said that white people could just lie, and they would not be turned away at the vaccination site (which begs the question, “why ask the racist question”?).  The DOH, taking its lead from “leader” Jay Inslee, has refused repeated attempts to provide an explanation for this deplorable (and possibly illegal) use of taxpayer funds. (Jason Rantz/MyNorthwest)

There have been several virtual meeting “faux pas” committed by members during the 2021 ”remote” legislative session, but nobody has seen them (as the Democrats intended during their “Secret Session”).  Nearly everyone has heard about law-breaking Senator Rebecca Saldana (D – Seattle) illegally participating in a legislative hearing while driving her car (she previously supported legislation which imposed strict penalties for such distracted driving offenses).  There have been several instances when legislators have failed to turn off their microphones and then uttered embarrassing comments for all to hear. The most notorious of these instances was committed by Representative Mike Sells (D – Everett), who didn’t realize the feed from his Town Hall Meeting was still live when he stated he wanted to say “F_ _ _ you” to a constituent for asking a question he didn’t like. (Crosscut)

Today is Earth Day and politicians will make grand promises to demonstrate how much they care about the environment and the media will amplify these pronouncements, without mentioning how these same politicians’ past promises resulted in very costly programs that dramatically failed to meet their stated goals.  Governor Inslee’s environmental policies have underperformed so badly that the state’s website has removed his data which showed they were costly failures. Of course, greedy environmental groups never mention this, since the governor always pours tax dollars into their bank accounts.

And, while stating salmon recovery is a top priority, and pushing to remove dams in Eastern Washington (which scientists state would do extraordinarily little to increase salmon runs), Governor Inslee and the Democrats are proposing a smaller share of state spending on salmon recovery projects going forward. Both Washington State and King County have failed dramatically to meet their carbon reduction goals, even though wasting massive amounts of tax money on their dreams.  Despite the failures, liberal politicians continue to push for even more expensive versions of these failed policies. Governments run by politicians who value self-promotion over results will never be able to efficiently solve environmental concerns, as is being demonstrated over and over in our state.

Solutions will more likely be found in the free market, through innovations and by bringing accountability (and incentives) into government programs.  There is a far greater likelihood that Amazon will meet its lofty environmental goals than any government entity will, for Amazon’s leaders demand innovation.  Also, improved corporate image and customer loyalty provide the financial incentives for the company to meet its stated goals.  Thus, wouldn’t it make sense for government resources to go towards encouraging more companies to follow Amazon’s leadership,  than to waste more funds on more failed government programs?   While this makes sense, it will never occur under Democrat control, since the party’s primary goal is to expand the size and power of government to please financial backers in government employees unions. (Washington Policy Center, Washington Results,  and Amazon)

As the legislature nears the scheduled end of its 2021 session, the Democrats have done nothing to investigate the mismanagement of Governor Inslee’s Employment Security Department (ESD), which cost the taxpayers more than $1.1 billion in 2020.  Frustrated Senator Jeff Wilson (R – Longview) has now called for the State Government and Elections Committee to hold investigative hearings after session has ended. Senator Wilson said, “We should have been talking about this months ago. Now that the state auditor is telling us this fraud is even bigger than anyone imagined, further delay is tantamount to sweeping the matter under the rug.” (Centralia Chronicle)

After a year of losing money, Alaska Airlines reports that it had its first month of positive cash flow in March.  The profit is due to cost-costing measures, government-support programs, and advanced bookings.  The airline’s stock is trading again at about the same level as it was last March, and after dropping nearly two-thirds immediately after the pandemic hit. (Seattle Times)

More violence has taken place as Seattle politicians continue to allow homeless encampments to thrive and grow, and reduce funding for law enforcement. This morning two people were shot (one critically) as they slept in their car at a South Park-area encampment. The suspect then fled the scene.  (MyNorthwest)

A Yakima Superior Court sided with the Washington Farm Bureau and the Washington Farm Labor Association in the battle with state health officials over unreasonable pandemic-related workplace rules.  The farm groups were forced to take this action because Governor Inslee and his team have refused to work with the groups to establish safe and reasonable guidelines.  The court removed many of the rules that would have made it impossible for many farms to operate, such as requiring all workers to be within an hour of an emergency room with a ventilator. The state will soon be announcing a new set of guidelines for agricultural work.  It is not known if Inslee’s minions will talk with anyone involved in farming before issuing the new guidelines. (Yakima Herald) 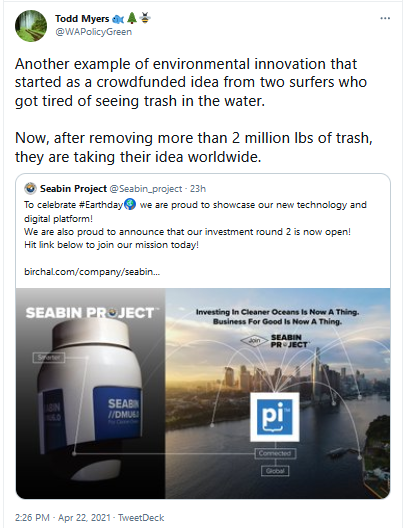