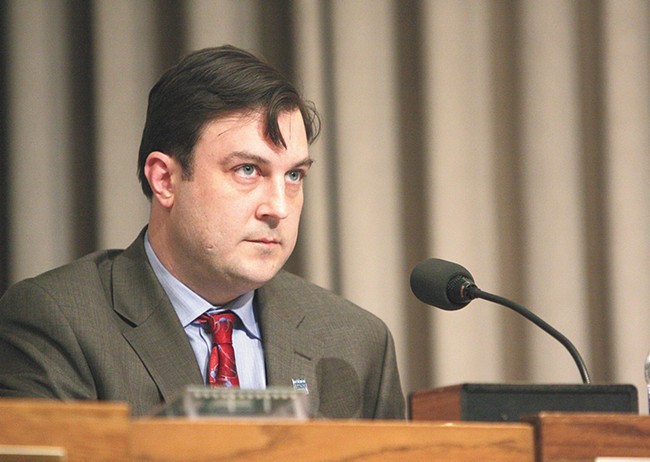 Former Spokane City Council President Ben Stuckart, who has a history of ethics problems and questionable activities, may have already again violated the City of Spokane’s Code of Ethics, despite being out of office for less than eight months.

While Stuckart was council president, he was fined by the city’s Ethics Committee for leaking a confidential email from a City of Spokane attorney, on a pending legal matter involving Stuckart’s supporters at Local 29, the city’s firefighters union.  Stuckart had forwarded the city’s confidential email to union president Don Waller, which was clearly a violation of common sense, in addition to ethics rules.

In 2018, Stuckart used his council president position to narrowly define the allocation of City of Spokane funds to fit the specific needs of the Carl Maxey Center, a non-profit which both Stuckart and his major campaign donors pro-actively supported. Stuckart also instructed City of Spokane employees to expedite the process to meet the budgetary timeline of the center and to possibly reduce the number of applicants competing for the funds.

During Stuckart’s losing campaign for Spokane Mayor last year (in which he was supported by the Democrat establishment, including Governor Jay Inslee), his cozy relationship with the firefighters union again raised red flags. A formal complaint against an “independent” campaign supportive of Stuckart (and mostly funded by Stuckart’s friends in the firefighters’ union) was made to the Washington State Public Disclosure Commission over the mysterious origins of approximately $80,000 that was used to fund negative ads against Stuckart’s opponent (and now mayor) Nadine Woodward.

The same negative ad campaign later had its ads pulled from the air for failing to properly disclose the source of its funding.

Before leaving office last November, Stuckart was the primary backer of the City of Spokane’s hurried effort to pay Jewels Helping Hands $740,000 to run the city’s “warming center” for the homeless. This was done despite officers of the non-profit organization having recent criminal pasts which included embezzlement of $500,000.  In April, the city refused to extend the contract with Jewels Helping Hands, due to an ongoing investigation into the organization.

Since departing the city council, Stuckart has opened his own consulting company.  It is his client work that is now raising red flags over the possibilities of another ethics violation.

According to the City of Spokane Code of Ethics Handbook (Section N), former city employees are prohibited for one year from representing “any person as an advocate in any matter in which the former City officer or employee was involved while a City officer.”  Yet in a recent Inlander story on the latest attempt to fluoridate the City of Spokane’s water, it states the effort has “the support of both former City Council President Ben Stuckart — who’s been lobbying for the issue behind the scenes — and former Mayor David Condon.”

While the story does not state specifically what Stuckart has done on behalf of the fluoridation effort, many people are again questioning Stuckart’s activities and whether he again violated the City of Spokane’s ethics policies, since he is still within the one-year restrictive time period.

We will keep you informed on this story as more details are revealed.