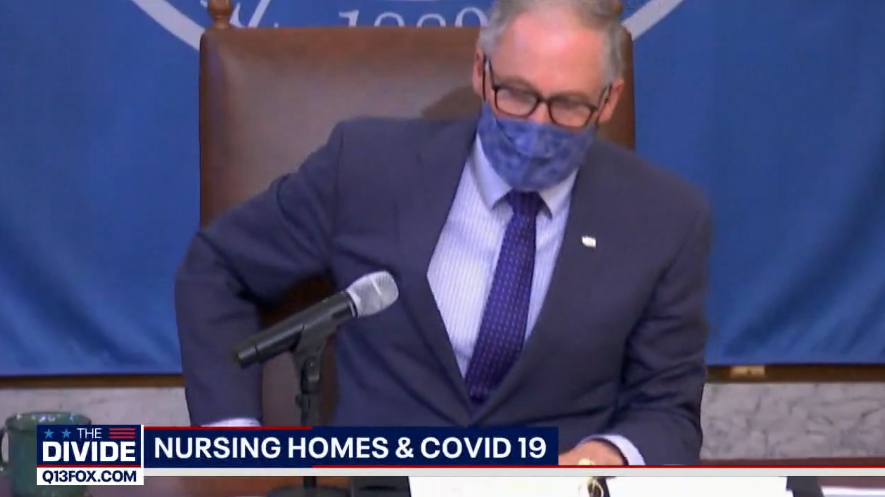 At one of the governor’s recent well-choregraphed media availabilities, Q13’s Brandi Kruse asked Governor Jay Inslee a serious and legitimate question regarding the state’s policy of providing financial incentives to nursing homes to accept hospital transfers and the governor responded by essentially saying his decisions, which could seriously impact the lives of Washington citizens, are above being “second guessed.”

In light of the ongoing scandal in New York, where Governor Andrew Cuomo forced nursing homes to accept patients who were COVID-19 positive and then “misrepresented” the numbers of deaths that occurred in the facilities, there have been some who have wondered about similar policies in Washington State, in which patients were transferred to long-term care facilities to free-up space in hospitals at the start of the pandemic.

As opposed to Governor Cuomo, who forced nursing homes to accept patients, Jay Inslee used Medicaid incentives to long-term facilities to encourage them to accept patients.  There is no evidence that Inslee has “misrepresented” the number of deaths in nursing homes.  Yet, it is a legitimate question to ask whether it was the best policy for the state to provide incentives to send patients to the locations where the coronavirus outbreak started in our state, and where 50% of the state’s COVID-19 deaths have since occurred

However, Jay Inslee does not like to be questioned. Just read this verbatim exchange  between Brandi Kruse and the governor:

Brandi Kruse: “We know that nationally there have been heightened scrutiny over how states handled nursing homes in the early stages of the pandemic.  Here in Washington you incentivized nursing homes to take patients from hospitals to create capacity. Should the state have allowed, let alone incentivize, those transfers given the risk of death to that population?”

Evidently, Kruse did not receive the directive from Inslee’s “Ministry of Truth”, which prohibits asking anyone in the state’s liberal establishment to account for their policy decisions.

(Side note: it would be interesting to obtain analysis from body-language experts as the governor squirms when Kruse mentions “nursing homes.”)

To go along with the governor’s refusal to work with Republican legislators (even refusing to answer a few letters they sent him regarding state restrictions) and ignoring the questions and concerns of both local health and elected officials, Governor Inslee also believes his actions are above being “second guessed.” Not exactly a model of leadership and certainly not something the founding fathers of our country imagined when they created our form of government, where elected officials are supposed to be accountable to those they serve.