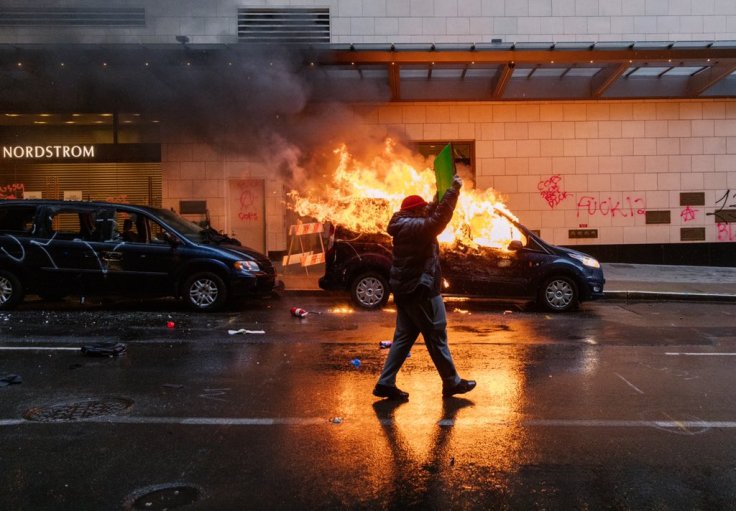 As Shift has reported many times during the past year, not one Democrat statewide elected official, nor one Democrat member of the state’s congressional delegation, has condemned the violent actions of their liberal activists who forcibly took over a portion of Seattle’s Capitol Hill last summer, and conducted numerous violent attacks on businesses and police officers.

Not only were liberal politicians silent about the violence, but the Democrats on the Seattle City Council actually rewarded the violence by caving into the activists’ budget demands to defund the police.  It is noteworthy that many of the same councilmembers who voted to slash the Seattle police budget had campaigned in 2019 on the need to increase police funding to reduce crime.

Governor Jay Inslee had the nerve to demand Republicans do some “soul searching” about violence committed by the extremists, even though they had condemned the violence as it was occurring.  Remember, Inslee embarrassingly acted as if he had never even heard about the violence done by his liberal supporters in the CHAZ/CHOP, even though it had been in national headlines for days.

Instead of his partisan shot, Inslee should have been applauding Republicans, including Congresswoman Cathy McMorris Rodgers, Congressman Dan Newhouse, House GOP Leader J.T. Wilcox, and State Republican Party Chair Caleb Heimlich for immediately condemning the violence perpetrated by a fringe group of Trump supporters in the nation’s capital and in Olympia.

It is also noteworthy that members of the media have not been writing stories about this very distinctive difference in attitudes about political violence.  That seems especially interesting since many members of the media were included in the physical attacks that occurred during the summer riots in Seattle and Portland, and Q13’s Brandi Kruse recently criticized Washington State Democrat Chair Tina Podlodowski for remaining silent and not standing up for media members who were attacked by the violent mobs.

Typical of the Republican response to violence was the call to action from former Republican Washington State Attorney General Rob McKenna.   He has been critical of those (including President Trump) who incited violence and those who committed the violent acts, and stated, “Republicans who are not extremists need to step up and take the party back.”  McKenna has also stated that Republicans need to continue to “criticize threats of violence, the use of violence, to stand against it.”

Perhaps some Democrats were listening to those words, and might learn the importance of condemning violence by their activists instead of mindlessly caving into the rioters’ demands. Unfortunately, all indications from Jay Inslee on down point to Democrat elected officials continuing their silence about liberal violence.

The Democrats seem to be hoping that the public will forget about their failure to condemn violence by the time the next elections come around. Our guess is that Republican media consultants are already editing TV commercials to remind voters of this rampant Democrat hypocrisy when the time comes.