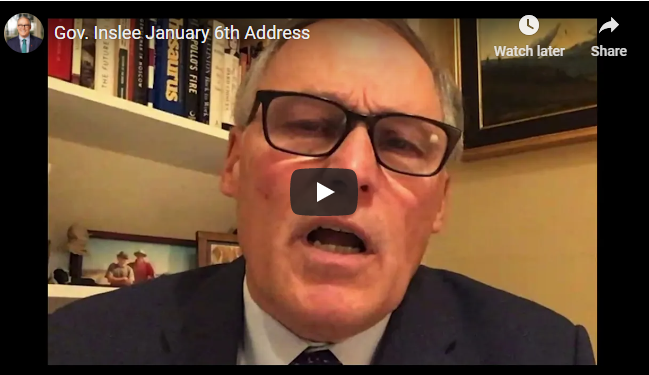 As expected, Governor Jay Inslee condemned the violence that occurred in Washington, D.C. and Olympia on Tuesday.

Nearly all elected Republican leaders in our state (as well as all of us here at Shift) have joined in denouncing this violence.

Regrettably, the governor attempted to make this unified response into a partisan issue when he stated, “I especially encourage the Republican Party to do some soul searching,” regarding the violence.  Yet the Republicans had already done this “soul searching” and had condemned the violence long before Inslee’s office had responded.

The governor should have known that Republicans (including Congresswoman Cathy McMorris Rodgers, Congressman Dan Newhouse, House Republican Leader JT Wilcox, and Washington State Republican Party Chair Caleb Heimlich) had condemned the violence conducted by those on the fringe of the far-Right, even while it was taking place.

It is interesting that the governor was demanding Republicans to do some “soul searching” regarding political violence, when he (and nearly all Democrat officials) failed to do the same “soul searching” when the flames of violence were being fanned by those on the far-Left last summer in Seattle.

In fact, Governor Inslee famously acted as if he had never heard of the Seattle violence and occupation of a police precinct (which was the top headline in all local and much of the national media) when he was questioned about it by a reporter.

Inslee and the Democrats, by their silence last summer, made political violence more acceptable and more “normal.”  Nearly all Democrats (including Inslee) were silent while rioters attempted to lock people inside the Seattle East Precinct before setting the building on fire and when someone (the stepson of a former Democrat legislator) bashed the helmet clad head of a police officer with  a baseball bat.  For these same people to demand “soul searching” of others who condemned violence (while it was actually taking place) is hypocrisy in its purest form.

Republican leaders clearly demonstrated this week that they do not want political violence to be considered acceptable regardless of the political agenda of the criminals involved, when they immediately denounced the actions by some of President Donald Trump’s supporters.

Political violence should not be a partisan issue.  Leaders on both the Right and the Left need to rebuke political violence, no matter who perpetuates it.  It is hypocrisy to condemn violence only when it comes from your political opposition