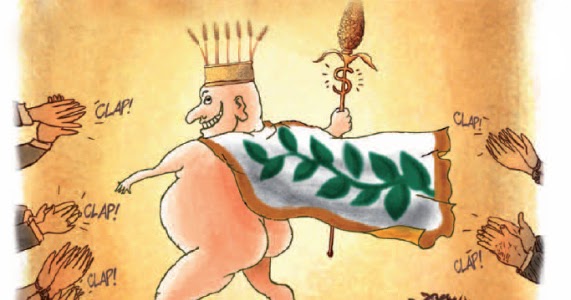 Democrat legislators are like the townsfolk in the famous Hans Christian Andersen tale “Emperor’s New Clothes.” They are too afraid to tell Emperor Inslee the bad news that he his failing to be responsible with Washington State taxpayers’ money.

The state budget is in a mess, tax revenues are in freefall, the unemployment fund is broke, and Democrat Governor Jay Inslee continues to write checks with Washington taxpayer dollars he knows he isn’t going to be able to cash.

Inslee’s big plan? Brace yourselves, it’s the usual one for Democrats – we must raise taxes.

Inslee essentially wants a federal government bailout to initially cover the massive state deficit he created with his ‘science based’ lockdowns. Like a kid in high school who overspent on prom night thinking his parents would cover the cost, Inslee isn’t even pretending anymore that he can fix the state budget and repay the money.

That’s why Inslee won’t even call the legislature back into session to do their job and balance the state’s budget, as state law requires.

Inslee doesn’t fear breaking budget laws, but he must fear that legislators, who the people of Washington elected to represent them, may decide he has too much power and might revoke his emergency powers. Even a few of Inslee’s own Democratic colleagues are calling for a special session to limit his executive powers. As a backup, concerned Washington citizens are preparing an initiative this November to do just that.

The state budget is facing at least $8.8 billion in lost tax revenue, state transportation budget revenues are down 60%, and Inslee still refuses to make any move to balance the state’s budget. Inslee’s recent token furloughs have been exposed as budget smoke and mirrors. The state employees he “laid off” for 10 days had received a raise on July 1st to cover that time off. The taxpayers of Washington are literally paying for state employees to take two weeks paid vacation, and even worse, Inslee conspired with union bosses in a scheme to allow the state workers to claim federal unemployment benefits for those 10 days, and thus many will make more money not working than if Inslee had just left them on the job.

Inslee keeps telling us we are all in this together, but it’s obvious from his decisions that we are not. There is one set of rules for Inslee’s special-interest buddies and campaign donors, and, another for the hard-working people of Washington State.

In a new twist of insensitivity, Inslee has decided to give $40 million taxpayer dollars away to “undocumented workers”, formerly known as “illegal aliens”. He did this while thousands of Washington citizens still haven’t received their unemployment checks from the state because of the incompetency of Inslee’s appointees at the Employment Security Department (ESD). He did this without legislative approval, or any public debate on whether this was an appropriate best use of our money.  He did this because no one in his Democrat Party – say an Attorney General who is supposed to keep people from ripping off the state’s taxpayers – will stand up for the Washingtonians who voted them into office.

Inslee keeps on spending hundreds of millions of dollars without any oversight, hoping no one is going to notice that the state doesn’t have the money. For those unemployed Washington residents who can’t make their rent or mortgage payments because of delayed benefit checks, it must be comforting to think that Inslee considers them second-class citizens. Inslee continues to spend their hard-earned dollars on illegal aliens and Nigerian fraudsters.

Without even missing a breath, Inslee announced the state is suffering and needs new taxes to cover the his overspending and the tax revenue lost because of his extended and partisan-motivated lockdowns. For those readers paying attention, Inslee just stated that since tax revenues are down, we need new taxes. Where does Inslee think the money is going to come from, from the hackers that his own ESD personnel allowed to steal half a billion dollars?

Over the last few years, the state budget has increased from $40 billion to its current $53 billion at a record pace. This still isn’t enough for Inslee – he wants to use the COVID crisis as an excuse to create a new, unconstitutional, income tax for all Washington taxpayers.

For most of us, Inslee’s pontifications from the hill in Olympia are nonsensical, or at least amusing, but they have a real impact on the daily lives of Washington residents. Washington may be finally waking up to Inslee, his cohorts, and the damage they are doing to Washington for their own political gain.

Inslee’s hypocrisy is on display for everyone to see. He is unwilling or unable to cut state spending (without approval from his campaign donors) and is betting the financial future of Washington State on a bailout that may not come. Inslee is not a leader; he is out of his depth and is looking for excuses to blame others for his own failures.

With every day that passes, that becomes more apparent. Emperor Inslee has no clothes. The only question is, when will he realize it – and will any member of his own Democrat Party have the courage to speak the truth about him?