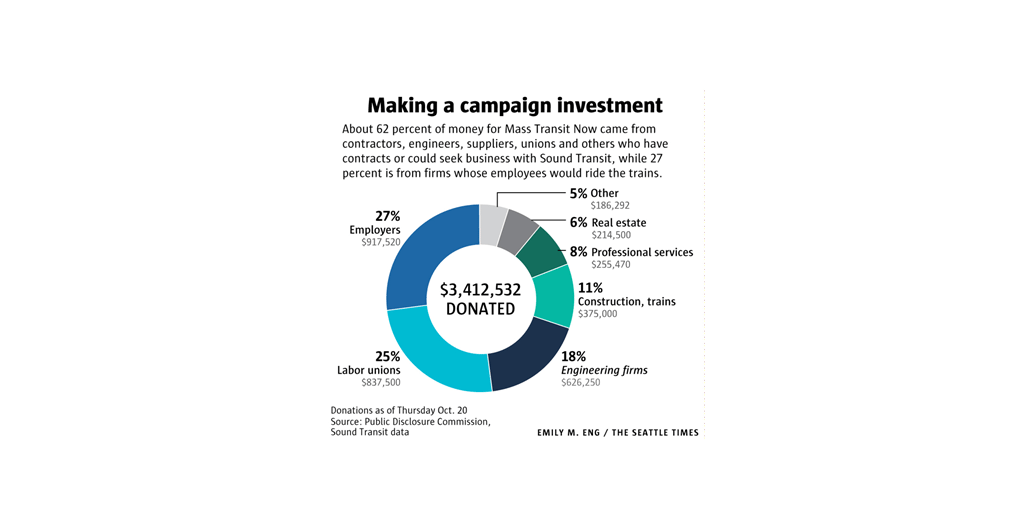 The first full weekend of general election voting is behind us, and the airwaves (and mailboxes) are starting to fill up with political ads. So, as a public service, Shift is providing you with a peek at who is behind all the campaign spending.

Last week we let you know about the Democrats’ favorite $3-million-dollar man – Nicolas Hanauer – and about the folks who love to throw the “green” around at Washington Conservation Voters.

Today we let the Seattle Times highlight the self-dealing donors funding this year’s biggest tax boondoggle, Sound Transit 3 (aka, Mass Transit Now). As the Times writes, “Campaigners for this fall’s Sound Transit ballot measure have raised 10 times as much money as their opponents, thanks to companies and groups that could benefit.”

Shift has been writing on this topic for months, including about how when Sound Transit isn’t spending taxpayer dollars on the election, its cheerleaders at the campaign are telling people that tax dollars are just so much “free money.”.

Now the Times comes forward to point out that “the ‘yes’ campaign received a total $550,000 from 15 companies that each won at least a half-million dollars in Sound Transit business from 2008 to spring 2016, a Seattle Times analysis found. Money spent to promote a big, new infrastructure program is a shrewd investment. Those 15 companies won $978 million in contracts and could compete for more in open bidding.”

Nothing like “free” public money to attract investors at labor unions and companies eager to grab their share.

And, of course, all those millions allow the folks at Mass Transit Now to keep lying about how it’s “a people-powered campaign.”

Yes, just a little “people-powered campaign”, if by people you mean corporations and unions that just want a piece of their taxpayer-funded pie.