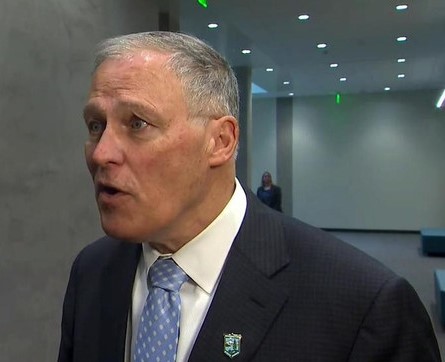 This is the third part of our expose on the failures of Democrat Governor Jay Inslee during the pandemic that has rocked Washington State (we know we said this was only a two-part series but Inslee has really jumped the shark this time).  Inslee, despite the science he claims to follow, has been persistent in his dogged approach in destroying business, people’s lives, savings and homes, all in the pursuit of trying to define himself as one of the greatest benefactors that ever lived.

The truth is, Governor Inslee has done little other than grandstand at press conferences/campaign events to pontificate on his greatness.

Take his comments aired on local TV on July 4.  Inslee believes his myopic decisions are equivalent to winning the COVID pandemic Super Bowl. Never mind the deaths, job loses and complete destruction of family-run business in Washington, Inslee thinks everything is just peaches and cream, and Terry Bradshaw should be handing him a big shiny trophy and asking him if he’s going to Disneyland.

Inslee has been so removed from the realty faced by millions of Washingtonians as he has lived high on public funding in the governor’s mansion, with free state patrol Ubers, and a staff buying his groceries, while he locked up everyone else in their houses, instructed to stay home and leave their jobs and told that “we are all in it together”. To cap this off, Inslee is claiming he has saved (maybe even personally) tens of thousands of lives.

Jay Inslee has isolated himself in a dreamworld where his staff coddles him and keeps the media away from asking him tough questions (and when they do, they only get one question, with no follow ups to point out his errors).  After 16 months of not even responding to letters, phone calls, and emails from Republican lawmakers and locally elected officials, the governor is never asked to be accountable.  At times some Democrats have threatened to burst the governor’s isolation bubble, but in the end there is still reluctance by Democrat legislative leaders to amend the governor’s emergency powers.

Democrat Speaker of the House Laurie Jinkins is so concerned about Inslee’s abuse of power that she immediately jumped into action and created a task force to study Inslee’s response to COVID, with a critical deadline to deliver their recommendations, on an expedited schedule, by 2023.  That’s right, the Democrats’ reaction to 16 months of one-man rule is to take another 18 months to have a handpicked group of lackies produce a report (which will likely be totally ignored).

In the meantime, Inslee gets to do whatever he wants.

Jason Mercier of the Washington Policy Center has listed some of the most outrageous oversteps in Inslee’s recent attempt to re-create the monarchy in Washington. His list of “achievements” include:

Washington residents are tired of being frustrated by this governor and his selfish partisan actions. Unfortunately, the ruling Democrats are too afraid to challenge his authority since it benefits so many liberal special interest groups.  Thus it appears that the governor’s approach of “do as I say, not as I do” leadership will continue for the rest of his term.

To read Part One of this series click here.

To read Part Two of this series click here.