Sometimes the key differences between Republicans and Democrats are very apparent, even in their approach to something as uniquely American as Thanksgiving.

Recently I received a pre-holiday email from Rob and Marilyn McKenna, encouraging us to think of others as Thanksgiving approached, asking us to join them in helping those less fortunate during the holiday:

“Please join us in supporting Northwest Harvest this holiday season by making a donation of non-perishable food items at one of their many neighborhood drop-off locations or by making a financial donation on their website.”

Then today I received one of the typically attack-filled emails that Dwight Pelz sends out from the State Democrat Party (and let us all give thanks that he will soon be retiring, and taking his email bile elsewhere). I opened it, wondering if he would take a chance to rest his usual negativity, and encourage acts of charity and good will during Thanksgiving week.

But no, that was too much to ask for Dwight and the Democrats.

Instead, it was an ask for money – for the Democrat Party, to pay for still more attacks on Republicans.

So much for demonstrating compassion during the holidays.

See the email below: 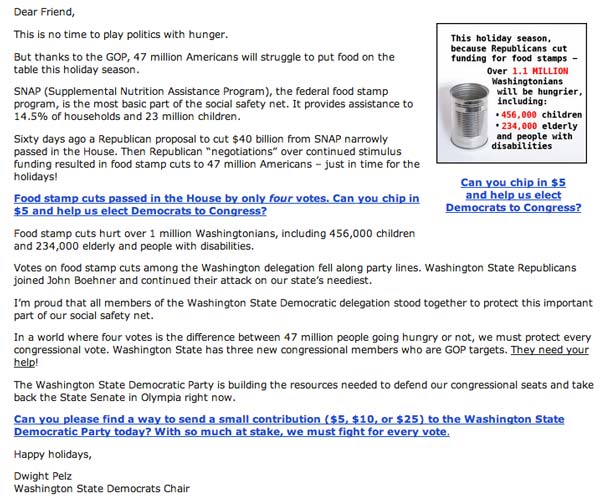