Despite obtaining 0.0% support for his presidential campaign, Governor Zero continues to overinflate his importance on the national stage.

Senator Mona Das is an embarrassment to the 47thLegislative District – her wild, careless lies cost taxpayer dollars. If she had any shame, Das would reimburse the Legislature for the investigation conducted into her lies.  We also wonder if Senate Majority Leader Andy Billig (D-Spokane) is going to hold Das accountable for her lies, or will he attempt to pivot with a discussion of institutional racism, as he attempted to do with the Seattle Times? (Shift)

Apparently, nobody spoke about climate change until Jay Inslee’s failed presidential campaign.  In his latest fundraising email, Inslee is taking credit for candidates talking about the climate.  He states, “our movement made a huge impact. Climate is finally moving to the front and center in this primary.” This despite the fact his climate change campaign garnered zero public support, ended five months prior to the first ballot being cast, and was passed up by such political powerhouses as Sestek, Williamson, Bullock, and Delaney.  Never in the history of American politics has a candidate with 0% support had any influence on the issues of the campaign. Never.  Yet Governor Zero’s ego believes his did.

In the never-ending quest to tax all commerce and punish people who don’t use public transportation, the City of Seattle is currently discussing taxing ride-share companies like Uber and Lyft.  Since many ride-share customers are individuals without cars, this tax will be another fee on the less affluent.  The City’s leaders might not be satisfied with just taxing the riders, for they also want to dictate the companies’ wage scale by setting minimum pay rates. (Seattle Times)

The Seattle City Council is urging schools to allow students to miss classes on Friday to participate in this Friday’s “Global Climate Strike.”  The council passed a resolution that “urges Seattle Public Schools to support its students’ right to assemble and participate in the Global Climate Strike.” One doubts the council would also support the students “right to assemble and participate” in a cause the council members do not support. (Seattle PI)

Proving you can still fight city hall – a public outcry causes the Seattle City Council to delay further action on banning natural gas.   Lame duck councilmember Mike O’Brien chose to postpone a committee vote on his proposal to ban natural gas in new home construction.   One speaker explained that replacing natural gas in Seattle would require a wind farm roughly three times the size of the city itself.  (MyNorthwest)

Governor Inslee will be in Spokane on Friday to participate in the Climate Strike.  The Governor will be supporting students missing school to promote a cause he believes in.  Again, we wonder if liberal officials, including Inslee, would support students skipping school for issues they oppose. (YakTriNews)

New state vaccine law could force 35 Spokane students to miss school starting in October.  The 2019 legislature passed a law requiring all students to be vaccinated for measles, mumps, and rubella, or proclaim a medical or religious exemption.  The students have until October 11th to obtain the vaccines or declare an exemption, or they will told to stay home.  (KREM-TV) 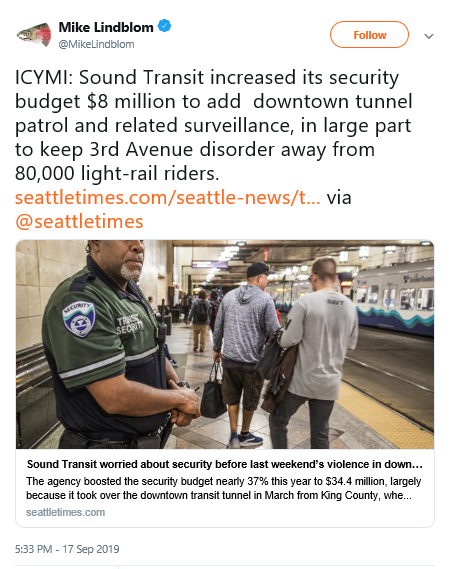