Since the Janus decision, many government workers are saying “Bye Bye” to their unions.

According to the Wall Street Journal, the Washington Federation of State Employees no longer receives fees from nearly 7,000 individuals after the U.S. Supreme Court’s Janus v. AFSCME ruling in 2018. This represent a drop of 27.4% members and $3.2 million less in revenue for the union. This is happening around the country but is most noticeable where there is an active organization (like the Freedom Foundation) to assist the workers through barriers put in place by the government unions. (Freedom Foundation and Wall Street Journal)

Due to the false accusations made by Senator Mona Das of racist and sexist behavior of members of the Democrat Senate caucus, Republican Senator Randi Becker (R-Olympia) proposes punishments be put in place for senators making false claims.   Becker has sent a proposal to the Senate’s Respectful Workplace Workgroup seeking punishments for those who knowingly make false discrimination or harassment accusations against a Senator or anyone who knowingly makes a false report to their supervisor or to the Senate Administration. (Washington Senate Republican Caucus)

State Senator Steve O’Ban (R-Lakewood) will propose new legislation aimed at solving the growing problem of repeat offenders with mental issues committing crimes. O’Ban’s bill is modeled after similar legislation in San Diego where the county appoints a guardian to make sure the offender is receiving treatment.  If the offender fails to receive treatment, then the guardian has the power to have them go before the involuntary treatment court. (KOMO News)

While liberal elected officials continue to fan the flame for a state income or capital gains tax because they believe our tax system is broken, data and outside analyst say the exact opposite. Washington state has a steady income stream that is envied by other states.  In fact, Standard and Poors says, “Washington’s revenues have historically exhibited less cyclicality than others (due in part to the lack of a personal income tax).” (Washington Policy Center)

A study by Econ Journal Watch found that liberal professors outnumbered conservatives on American campuses by over 11 to 1.  This was determined by examining the voter registrations of professors of 40 leading universities.  The disparity was the largest in History (33 to 1) and Communications/Journalism (20 to 1). (Econ Journal Watch)

Restaurants are facing an “hostile environment” while trying to operate in Seattle.  Due to higher labor costs, permit delays, road construction, beverage tax, parking costs, and other obstacles put in place by city government, owners are finding better opportunities in other nearby communities. (KING News)

Seattle policies regarding bike and scooter rentals have caused an increase in the number of cyclists who are not wearing helmets.  Also, due to the growing influence of biking organizations at city hall, there has been a significant drop off in enforcement of bicycle helmet laws. In 2011, there were over 600 helmet violation citations issued. In 2017 there were just 33 and only 46 in 2018. (Seattle Times)

Changes in Seattle’s zoning will be necessary if the city wants to improve the availability of affordable housing.  More supply is necessary, and this can be done by allowing more apartments and condominiums, or by allowing more duplexes and triplexes where single homes currently exist. (MyNorthwest)

This week’s tax that will make living in Seattle more expensive is a $0.57 tax on Uber and Lyft rides.  The Seattle City Council voted unanimously to institute the new tax for all rides in Seattle. Reason given for the new tax is to pay for affordable housing, the over budget 1st Avenue streetcar, and for drivers’ pay. (Seattle Times)

The City of Spokane is requiring Jewels Helping Hands to wait for the city to make repairs and not do the work themselves.  Jewels Helping Hands is making building improvements for a 24/7 warming center and says they can make necessary repairs themselves.  The city insists that its procedures must be followed since it is a city funded project. This is causing a delay in opening portions of the building and could cause people to be turned away if over 30 people arrive seeking shelter. (KREM)

Hemp grown in Washington must not exceed THC levels higher than 0.3%.  Due to new procedures enacted by the Washington state Department of Agriculture, it is likely that more of the hemp grown in Eastern Washington will exceed the limit which will result in the destruction of entire crops.  One of the major changes will be what part of the plant is tested.  Previously the entire plant was tested, but now a sample will be taken near the top of the plant where more THC is concentrated. (Capital Press) 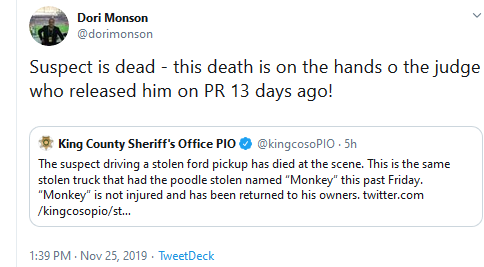