That look you get when you try to find Jay Inslee’s name on a presidential poll.

Aside from catching Inslee’s name at the bottom of most democratic presidential straw polls, you may have forgotten, understandably, that our absentee governor is running for president. Despite countless hours in carbon emitting planes and cars, traveling the country to promote his campaign, Inslee’s results have been minuscule at best. In a recent New Hampshire poll, Inslee was only one of two (out of 24 candidates) to receive ZERO votes. (Seattle Times)

Sen. Mike Padden’s (R-Spokane Valley) bill to designate four DUIs over the span of 15 years a felony seemed to be something that everyone in Olympia could get behind. After easily passing through the Senate, the bill was put on hold, and ultimately failed, because of Rep. Tim Ormsby (D-Spokane). If we roll the tape back just one year, we’ll see that in February of last year Rep. Ormsby was reported to have rolled his Jeep and charged with a DUI. Pretty strange that the bill aimed at leveling harsher penalties toward DUI offenders was stalled in Rep. Ormsby’s committee, right? (MyNorthwest)

A group of marchers took to the Seattle streets in support of the March for Immigrant and Workers Rights yesterday. Yesterday, May Day, sees different rallies and marches occur throughout the country, historically in support or workers. The last few years in Seattle, the marches seem to always devolve into violence. Some local businesses on the marching route took preventative measures against vandalism and boarded up windows. Apparently, nothing says passion and authenticity like the destruction of another’s property. (KIRO 7)

It’s safe to say that, for most of us, thoughts of Yakima aren’t accompanied by thoughts of a booming technology scene. And that’s ok! In the age of social media, some government officials are asking how they can best connect with the public. “Social media can be a great way to reach out to different demographics,” said Flannary Collins, Municipal Research and Services Center managing attorney. “It is certainly the current communication wave.” Currently only about 6 percent of Yakima residents follow the city’s Facebook account. (Yakima Herald)

Included in this year’s capital budget were funds for a few projects outside of King County. Part of that list was $27 million to build the WSU Tri-Cities Academic Building. “This construction budget puts people first by putting a record amount of funding to build public schools, colleges and universities,” said Rep. Steve Tharinger (D-Port Townsend). (Tri-City Herald) 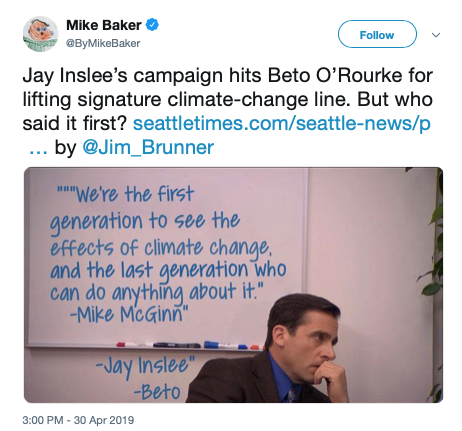