Kshama Sawant hates big money in politics but she won’t take Democracy Vouchers because it will prevent her from raising lots of money. Makes sense, right?

Cosmetologists from all around the state of Washington flooded the senate hearing room to rip into Democrats over a bill that would destroy their industry. Senator Karen Keiser (D-Kent) proposed the legislation under the guise of fairness but it seems like an effort to force unionization on the current independent contractors. “We are barely covering our overhead, and I think it’s a misconception that just because you get your haircut, we’re doing great,” said salon owner Jamie O’Neill. “It’s very hard to survive in Washington state with the taxes that we pay.” (KING 5)

With the measles outbreak in Clark County, the Seattle Times Editorial Board wrote what most of us were thinking. The outbreak, “should prompt state legislators to finally correct Washington’s loose policy surrounding mandatory vaccinations. Currently, Washington is just one of 18 states that lets parents opt out of having their child vaccinated because of ignorance or believing in pseudoscience. State Rep. Paul Harris (R-Vancouver) is sponsoring legislation that would eliminate the personal exemption for measles, mumps and rubella. (Seattle Times)

Rep. Brad Klippert (R-Kennewick) is looking to cost the state $9 million in revenue by placing even more restrictions on marijuana shops. Klippert’s bill not only expands the kinds of facilities in which the 1,000 foot rule around cannabis shops is triggered (which seems fine), but would prohibit the state from renewing licenses to businesses that would suddenly be out of compliance (which seems unnecessarily punitive.) (The News Tribune)

According to a report from the American Society of Civil Engineers, Washington State’s infrastructure leaves a lot to be desired. While technically passing, Washington is graded with a C. “Reliable and safe infrastructure requires sufficient investment, thoughtful planning, and preparation for the future,” wrote Richard Fernandez, an engineer for the city of Seattle who chaired the evaluation committee. (The Columbian)

“If there’s agreement among policy wonks that Washington’s tax code needs to change, there’s equal disagreement over the nuances of that discussion and what reforms should be made,” wrote TJ Martinell with The Lens. One of the key sticking point is Democrats’ insistence on using an unconstitutional capital gains income tax. Inslee’s own state Department of Commerce has said the lack of a state capital gains income tax is a major attractant for businesses to Washington. (The Lens)

Former Seattle Police Chief, Jim Pugel, is jumping into the growing, and already crowded field of city council candidates to represent District 7. “I love helping other people solve problems,” Pugel said. “You don’t have to sit at the head of the table but you’ve got to be at the table in order to make change.” It’s too early to tell whether or not Pugel will have the support of the law enforcement community after he came out in support of a controversial police reform initiative – I-940. (Seattle Times)

The Seattle City Council unanimously voted to approve a tax for a new waterfront project following the demolition of the Alaskan Way Viaduct. “I don’t need to pay for a walkway for the cruise boat people,” said a downtown Seattle condo owner. The project is estimated to cost a whopping $700 million with Seattle taxpayers coughing up $248 million. (MyNorthwest.com)

With union support waning, Seattle City Councilmember Kshama Sawant is turning toward out-of-district money after she turned down democracy vouchers for her re-election campaign. Of course Sawant blames her use on big money outside donors on…you guess it…those evil businesses and job creators. “I’m taking democracy vouchers, so are other contenders, which means if Kshama participated, we’d all be limited to $150,000 in spending,” opponent Logan Bowers tweeted.” Oh, the irony. (MyNorthwest.com)

In a unanimous vote the Snohomish County Council voted yesterday to file a lawsuit against OxyContin distributors. “This lawsuit is our way of holding these companies accountable to our residents,” said Terry Ryan, Chair of the Snohomish County Council. “Nothing can bring back sobriety or peace of mind, but this can help to ensure that other communities won’t be harmed in the future.” (KING 5)

House Republicans last week elected rising conservative start Rep. Jacquelin Maycumber (R-Republic) to caucus Floor Leader. “It’s an honor I take seriously and I’m excited to help my colleagues as we bring forward solutions to the issues and problems facing our constituents around the state,” she said. (House Republicans)

Due to issues at the Hanford Plutonium Finishing Plan, contractor CH2M Hill Plateau Remediation may miss out on $10 million. This was the second year in a row that the annual scorecard from DOE called CH2M Hill’s performance into questions at the Plutonium Finishing Plant. “We will continue to learn and grow,” said Ty Blackford, CH2M president at Hanford. “We overcame significant challenges, but also made great progress for the Hanford Site mission.” (Tri-City Herald) 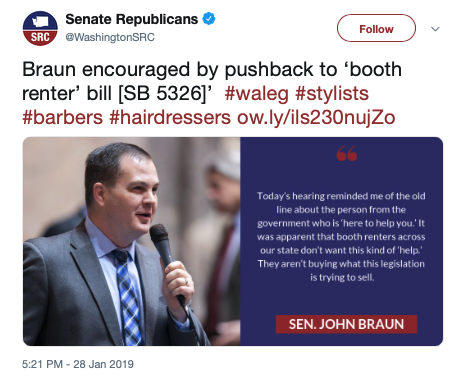