The campaign may be over, but the stench of taxpayer funded security costs still linger.  Hours after ending his Presidential campaign, Jay Inslee announced he will be running for a third term as Governor.  At his press conference, Inslee was asked numerous times if he will reimburse the Washington taxpayers for his security cost and each time he replied, “We are going to follow the law.” (FYI – reimbursing the taxpayers for a campaign expense would also be legal.)  Over the weekend, the state GOP announced they will deliver a petition asking Inslee to reimburse the taxpayers. (KOMO News and Seattle Times)

Inslee pledged that he would not accept a position in a new Democrat Administration if he is elected to a third term.  “There was one position in Washington, D.C., that I thought I was interested in,” Inslee said. “I will not be serving in that capacity. But I am looking forward to serving as governor, if people give me this option.”  We have seen from Inslee’s 2012 pledge to veto any tax increases; he has difficulties keeping promises to Washington voters.  And, unless he plans to run for a fourth term, there is no real incentive for Inslee to keep this promise as well. (Crosscut)

In order to comply with the county’s ordinance to not supply ICE with information on illegal aliens, King County Sheriff Mitzi Johanknecht temporarily removed her department from the nationwide LinX system.  The system allows departments across the country to share information on criminals.  Since ICE can access this information, Johanknecht felt compelled to remove King County from posting and obtaining information.  (MyNorthwest)

The Seattle School District agreed to a three-year contract with the Seattle Education Association that includes an 11.1% – 12.1% pay increase.  This follows last year’s contract where teachers received a 10.5% pay raise.  Seattle teachers will now make an annual salary between $62,000 – $124,000 plus benefits. (Seattle Times)

In the race for position one on the Spokane School Board, the hotly contested issue is on whether Spokane schools should arm school resource officers.  Katey Trelour is in favor of arming officers on school campuses and wonders why the “Spokane Public Schools (is) the only school in the area without an armed resource officer.” Trelour’s opponent, Nikki Lockwood doesn’t believe arming officers is the best solution and is concerned about school safety and suicide rates. (KREM-TV) 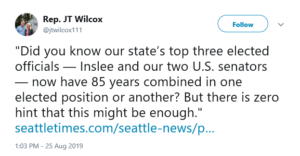 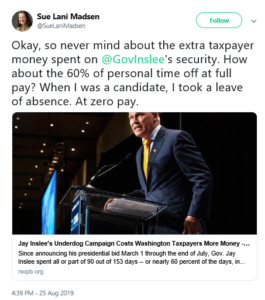