The State House of Representatives will conduct a pilot program for remote testimony during the 2020 legislative session.  It will only take place for testimony before three committees (College & Workforce Development; Housing, Community Development & Veterans; and Local Government) and only one at a time.  Remote testimony sites will be in Bellingham, Ellensburg, Spokane, and the Tri-Cities. (Washington Policy Center)

Needing to surpass 50.25% of the vote to avoid a mandatory recount, it appears voters have rejected Referendum 88 and affirmative action.  Currently the “Reject” vote is over 50.4% and leads the “Approve” vote by 15,000 votes.  The Approve campaign released a statement saying it appears the measure “will fall just short of approval.” (Secretary of State and Seattle Times)

King County Executive Dow Constantine continues to use his taxpayer funded security detail to take him to bars and other personal appointments.  Earlier this year Constantine received public criticism for having the protection unit act as his personal “Uber Driver” taking him to bars and concerts. Overtime pay for the officers was approximately $73,000 in 2018.   Last Friday afternoon Constantine was spotted having drinks in a West Seattle bar while his security detail waited in the parking lot. (MyNorthwest)

Centralia School Board Member Jami Lund released a statement on Tuesday saying, “It is clear that my term on the Centralia School Board of Directors is ending.” Lund was the target of a $93,000 vindictive independent expenditure campaign waged by the Washington Education Association because Lund correctly stated that the 24% pay raise the teachers received would force cuts to education programs. With just a few votes left to count in Lewis and Thurston counties, Lund is trailing Mindi McDougall by 130 votes, 2,584 to 2,454. It should be noted that prior to the WEA buying the election, McDougall had just one contributor to her campaign while Lund had 226. (Lund statement on Facebook)

Along with taking another attempt to pass the head tax, expect the new Seattle City Council to push for heroin injection sites and removing the Navigation Teams that help the homeless.  Led by Kshama Sawant and Tammy Moreles, the council will attempt to move the city even further to the left. (MyNorthwest)

30% of the revenue for tolls on the new Highway 99 tunnel will go towards paying for the tolls to be assessed and collected.  The high overhead pays for toll gantries, cameras, laser scanners to read the Good to Go passes, billing contractors to capture vehicle data, recognize license-plate numbers as needed, bill the customers and track the money collected. (Seattle Times)

The race to become the new Council President for Spokane is now separated by only 7 votes.  Breean Beggs currently leads Cindy Wendle 30,880 to 30,873.  This race was a mirror image of the race for Spokane Mayor.  Both featured moderate/conservative women who received financial support from individuals and businesses up against liberal/progressive men who were strongly supported by government employee labor groups. (Spokane Election Department and WA Public Disclosure Commission)

Instead of trucking produce to SeaTac to fly to Asia markets, Eastern Washington fruit growers can now take flights out of Moses Lake.  Columbia Pacific Aviation invested $2 million in refrigeration and storage facilities at the Grant County International Airport and is expected to make 60 flights to Asia this year. (iFIBER One)

One week after Spokane voters overwhelmingly voted against an income tax and supported rolling car tabs back to $30, the Spokane City Council voted to increase property taxes by 1%, the most allowed by law.  The additional revenue is earmarked for public safety and will pay for more police and fire personnel and new equipment. (KHQ) 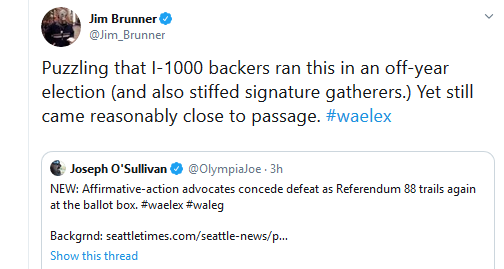 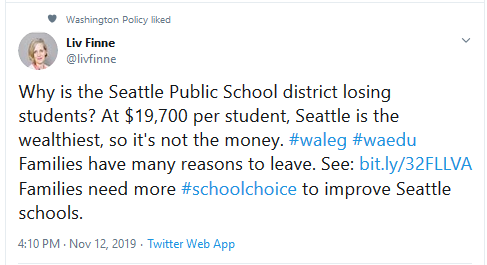 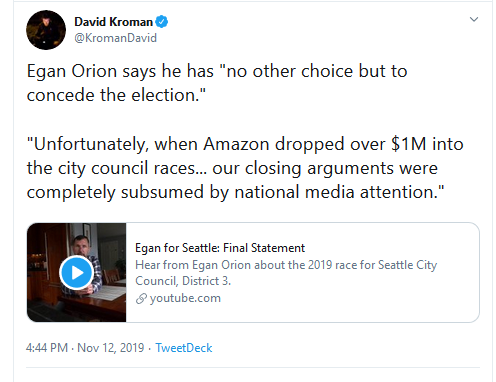 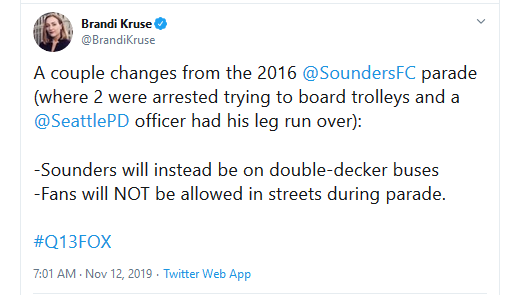