While the rest of the world is considering banning re-usable grocery bags, Governor Inslee and the Democrat lawmakers just eliminated single-use plastic grocery bags which could help stop the spread of disease.

In a clear example of political bad timing, Governor Inslee signed legislation to ban single-use plastic grocery bags in Washington State, just as local, state, and national governments around the world are banning re-usable grocery bags to help stop the spread of coronavirus.  The Democrat-sponsored measure, which has questionable environmental benefits, is a favorite issue for the virtual-signaling environmental community, and not even a worldwide pandemic is enough to delay its implementation for the green extremists.  In a true case of irony, just as Governor Inslee finished signing the bill, his staff assistant dons a pair of plastic gloves to protect herself from spreading/contracting COVID-19. (Q13, News Tribune, and TVW Screengrab)

Respected Seattle Attorney Mike Vaska announces he will be running for Washington State Attorney General.  Vaska launched his campaign by saying, unlike the current incumbent Bob Ferguson, he is “not obsessed with filing partisan lawsuits to grab headlines” and will focus on public safety and homelessness.  Vaska differentiated himself further from Ferguson by stating he is “a professional lawyer, not a professional politician.” Ferguson, who spent $1.4 million in his 2016 re-election bid has already raised  $2.3 million for his 2020 campaign.   Much of Ferguson’s 2020 fundraising (and over $1 million in expenditures) was due to his planned race for governor that was derailed when Governor Inslee gave up on his failed presidential bid and announced he would punish Washington voters by running for a third term. (Seattle Times and Washington Public Disclosure Commission)

Just released emails confirm that the Democrats’ strategy behind their capital gains income tax push is to provide the Washington State Supreme Court an opportunity to rule it as constitutional and thus allow the backdoor implementation of a state income tax without having to amend the state’s constitution.  If successful, this strategy would allow bigger government advocates to jam through a new tax with only Democrat votes, without having to navigate around the previous constitutional roadblock of a public vote – where at least 10 previous income tax proposals have failed. (Washington Policy Center and Ballotpedia)

The Association of General Contractors (AGC) called Governor Jay Inslee’s ban of residential and commercial construction “drastic compared to other states.”  There was confusion, after the governor’s initial stay home orders on Monday, as to whether private construction would be allowed to continue.  The governor’s office clarified the order with a letter on Wednesday stating residential and commercial construction were not exempt from the order.  The AGC pointed to both California and Oregon where private construction could continue despite their own “stay at home” orders. (Washington Research Council)

The Freedom Foundation has asked Governor Jay Inslee to impose a three-month moratorium on the dues collection from 300,000 public union workers.  In a public letter to the governor, Freedom Foundation C.E.O. Tom McCabe said allowing workers to keep and spend the money would pump a needed $60 million back into the economy.  Government employee unions’ bank accounts have bloated in the past couple of years as the Democrats have increased the state budget by 20%.  (Tom McCabe letter)

With the state order for the resumption of educating Washington’s 1,000,000+ school children, school districts have differing levels of preparedness.  Many school districts (like Seattle) who had previously not incorporated significant on-line education programs (often due to teachers’ unions objections), are facing the most difficulties, and they might not be able to provide equal educational opportunities to all their students.  This is ironic due to the “equality” political narrative often pushed by the Seattle School District. (Seattle Times)

Former Washington State Attorney General Rob McKenna said the power to battle a health crisis like COVID-19 is delegated to the state and local level by design and we are currently in “unchartered territory” in how rules are currently being applied.  McKenna said, “But as far as I can tell, this is the first time that the federal government, (and) state governments have used their powers to the extent we’re seeing, you know, you actually order people to stay home, to tell them they can’t go to work, to shut down businesses,” (KIRO Radio)

The sightings of near empty buses on our roads will be slightly fewer as Pierce Transit joins with other regional mass transit agencies in temporarily reducing its service.  Following King County Metro’s announcement last week that it will reduce its service by 25%, Pierce Transit stated it will be reducing service by 28% starting next Monday, in large part due to a ridership decline of 57% as compared to last year.  (News Tribune and Seattle Times)

Lake Stevens’ mayor asks citizens to only conduct “outside the home” tasks every other day to reduce the number of people in public.  Residents whose last name start with A thru M should go to grocery store, bank, mechanics, etc. on even-numbered days while those whose last names start with N thru Z should go out on odd numbered days.  Not sure if this will reduce the number of people in public, but it could create a feeling of unfairness when next week March 31st is followed by another odd-numbered day April 1st. (Everett Herald)

7,000 Washington State University students have signed a petition asking the school to provide a partial refund on the current semester’s tuition.  Many of the students have experienced job loss (especially those in the food-services industry) and all are not allowed to use much of the campus’ facilities (including libraries) as the university switches to an all on-line education program. The school administration has yet to decide how it will handle the students’ request.  (Spokesman-Review)

The U.S. Forest Service has paused all its scheduled “prescribed burns” during the coronavirus outbreak.  The burns are designed to reduce vegetation that fuel the spread of larger fires. Nearly 10,000 acres were scheduled for burns this spring in Chelan and Okanogan counties. (NCW Life) 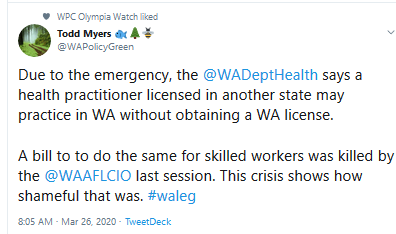