Now is not the time for Governor Inslee to promote an environmental fad on grocery bags instead of supporting strong public health practices.

By signing instead of vetoing the state’s new plastic grocery bag ban, Governor Jay Inslee demonstrated that his desire to make environmentalists happy with ineffective public policy is stronger than his commitment to protecting the citizens of Washington from the spread of contagious diseases.  Inslee today signed SB 5323, which bans single-use plastic grocery bags in Washington state.  This misguided political act is coming at a time when many government entities around the country and many grocery retailers are prohibiting multi-use grocery bags for the fear of spreading the coronavirus.  With the new public attention to confining germs by repeatedly washing multi-use bags, there is little or no environmental benefit in using these bags instead of plastic grocery bags. (Washington Policy Center, Washington Legislature Bill Summary, and CNBC)

While considering new government restrictions on “social distancing,” Governor Jay Inslee has another interesting decision regarding legislation that reduces the penalty for knowingly transmitting the HIV disease. The Democrat controlled legislature passed SB 1551 which reduces the penalty from a felony to a misdemeanor for transmitting HIV.  The governor can now either sign or veto the legislation (Inslee will likely sign the bill).  At a time when government is now imposing fines for behavior that COULD cause the spread of a deadly virus, should we be reducing the penalty for actually spreading a still oftentimes fatal disease? (Pharmacy Times and Washington Legislature Bill Summary)

Vice President Joe Biden has defeated Senator Bernie Sanders by 21,000 votes in the March 10th Washington State Democrat presidential primary.  Unfortunately for Biden, the two-week delay in obtaining final counts of the mail-in ballots negated any possible momentum he could have received from winning the Washington primary.  And, even with the incredible circumstances surrounding the 2020 primary, many people are seeking yet more reforms in how Washington voters select delegates to the Republican and Democrat national conventions. More than a few Washingtonians were upset that the presidential primaries required the declaration of party affiliation, which Senator Steve O’Ban (R-Pierce County) has already proposed legislation to correct after watching thousands of ballots thrown away for not have a partisan affiliation declared on the outside envelope.  Additionally, of the more than 1.5 million votes cast in the Democrat primary, approximately 385,000 (nearly 25%) were wasted on candidates who had dropped out of the race between the time Washington voters received their ballots in late February and the March 10th election. Also, there is increased displeasure that taxpayers are funding the process to select the two major parties’ nominees. (Everett Herald, My Northwest, and Washington Secretary of State’s office)

Governor Inslee’s “Stay Home, Stay Healthy” proclamation is forcing families to spend more time together in confined spaces and thus there has been a disturbing increase in domestic violence calls.  There is an exception within the governor’s orders that permits those threatened by abuse to seek alternative places to stay. (MyNorthwest)

The Seattle School District is falling behind other districts across the country in educating students during the coronavirus outbreak.  This is primarily due to the district’s adherence to the progressive political philosophy of “equity” and due to the control of the teachers’ unions over the educational system in our state.  The Washington Education Association has long been a roadblock for the expansion of online education opportunities in Seattle and around Washington.  Instead of being prepared, the Seattle School District is now having to play catch-up on technology and methods of online education during an historic nationwide health crisis. (Seattle Times

Environmentalists want to stall the approval of a much-needed project at the Port of Kalama that would reduce current greenhouse gas emissions.  After Jay Inslee’s Department of Ecology (DOE) ruled that they found “insufficient” portions of a required environmental study on the proposed Kalama methanol plant, environmental groups want to delay the process and force local officials to completely redo the study.  However, after a recent meeting with a bi-partisan group of state legislators, it appears that the DOE is willing to allow the initial report to be amended with the requested data.  The Kalama plant is expected to create 200+ permanent jobs for Cowlitz County if it is approved. We should note this is one of two plants (the other is in Tacoma) which Governor Inslee last year reversed his administration’s support for during his failed presidential campaign. By reversing his support, Inslee was hoping to raise money from wealthy environmental activists, despite the negative impact it would have on local jobs. (Longview Daily News)

Seattle lawmakers and the city’s Department of Transportation need to explain why the relatively new West Seattle Bridge needs to be closed due to damage caused by cracks and water.  A Seattle Times editorial suggests the reason is because the city has forgone maintaining core transportation infrastructure in favor of spending financial resources on “less essential street projects.” Can you say “over-budget street car projects”?  (Seattle Times)

There are 1,700 food trucks around Washington, and most are open during the COVID crisis.  Because they don’t have dining rooms, they are not subject to recent state restriction that have forced traditional restaurants to either close or just provide take-out and delivery options. (News Tribune)

Like other modes of transportation in the supply chain, maritime continues to deliver goods to the market.  Puget Sound Pilots hop aboard all incoming ocean-going vessels near Neah Bay and bring the ships into port.  The local pilots have had to take extra precautions as they enter the ship’s confined spaces with crew members from around the world. (MyNorthwest)

Spokane alcohol manufacturer Dry Fly Distilling has created “Spokanitizer” to help stop the spread of germs in medical offices, nursing and retirement homes, and among first responders.  They have distributed approximately 7,000 bottles of the custom-made hand sanitizer for free.  A company Vice President said, “We just wanted to help out.” (Spokesman-Review) 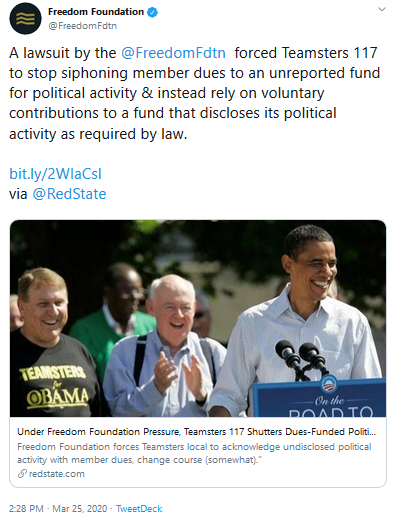 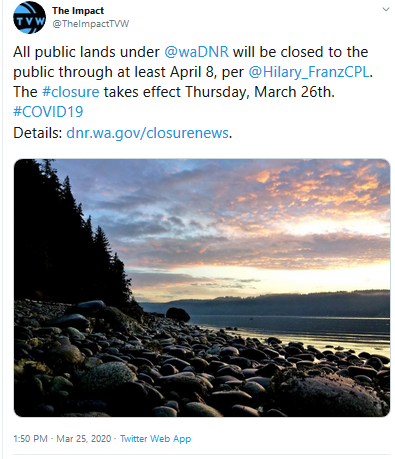