A quick apology for the one hour delivery delay of today’s Daily Briefing.  As with everyone, we have experienced a few disruptions to our schedules.  Thank you for your patience!

The legislature is getting out of town today – our wallets may be safe again.  Today is Sine Die, which is Latin for “It’s about time they adjourned”, in Olympia.  That means that members of the Democrat majority are trying to jam through whatever bad ideas they can, into whatever bills they can, in hopes that others will vote for them just so they can go home.  The reality is that there really are only a few things that must pass today: the operating and capital budgets, an emergency coronavirus funding bill, and maybe the Boeing tax break which liberals have already loaded up with favors to their big union donors. Once those are done, we can only hope it’s adios for the year, so legislators can get back to their real job – fundraising for their campaigns. (Cornfield Report/Everett Herald)

File this under the silver lining department, but it appears that Democrats have decided to not spend all the money they can before they adjourn. [The current dark cloud hanging over the world, and particularly our state right now, is certainly nothing to joke about, but it does appear to have caused the liberals running Olympia to slow down their spending plans, a bit. As Spokane reporter Jim Camden writes, “Facing uncertainty over a possible economic downturn from the novel coronavirus and the need to fight the outbreak that has claimed more than two dozen lives in Washington, lawmakers significantly changed the budget plan they expect to pass Thursday.” He points out that, in the budget plans the House and Senate released last month, Democrats planned to leave less than $10 million in reserves (out of a two-year budget of more than $50 billion). Even the chief Senate budget writer calls those plans “substantially obsolete,” now. Unfortunately, the Democrats are still adding over $1 billion in new spending to the operating budget this year, thanks to unexpected money coming from estate taxes. As Sen. John Braun, the Republican budget leader, said “This is a better budget than it could have been, but the spending is still too high and it misses the mark in areas that would most help our most vulnerable citizens.” (Spokesman – Review)

You can’t say the liberals don’t have their priorities straight. They started the session with a record-setting economy and decade-long bull market, and they finish it by having passed this “share of hits” according to the Herald’s Jerry Cornfield: “This year Democrats pushed through laws requiring a comprehensive sexual health education curriculum in every school district, banning thin single-use plastic bags across the state, establishing protections for domestic workers and creating a new state office dealing with gun violence and firearm safety.”

That’s right, all the far-lefties running state government have to show for their 60-days in session – beyond adding another billion dollars to the state budget (see note above) – is a focus on seXXX ed, an inefficient bag ban their environmental donors demanded, and a new state bureaucracy which tasked with doing something the government already does.  As House Majority “Leader” Pat Sullivan put it: “We’ve done all we can to prepare today for the upcoming year.” Way to “lead”, Democrats. It’s not like anything important is going on outside your liberal bubble. (Everett Herald)

Authors of legislation titled “Amending state greenhouse gas emission limits for consistency with the most recent assessment of climate change science” use false climate information to support the bill.   In the preamble of HB 2311 the bill’s sponsors claim, “Washington State is experiencing real world impacts of climate change on a daily basis with reduced snowpack levels.” This is simply not true.  Current snowpack is at 106% of normal levels and 10 of the past 13 years the snowpack has been above normal. If Democrat legislators want the public to support climate legislation, then they should be honest and provide accurate scientific data. (Washington Policy Center and Washington Legislature Bill Summary)

The News Tribune and the Vancouver Columbian weigh in – hey Democrats, quit messing around with the Public Records.  Up and down the I-5 corridor, it’s clear to some that repeated attempts by legislators to limit access to public records – a right established by the people through a 1970’s initiative – is simply wrong. The latest dust-up concerns Democrats’ attempts to curry favor with the media by giving them a right that other citizens would not have – access to public employee information. But as Tacoma’s News Tribune writes, “Let’s call the bill what it really is: a backdoor attempt to block the inquiries of anti-union groups, chiefly the Freedom Foundation.” Just a thought, perhaps the Democrats should stop doing the bidding of major donors and leave the Public Records Act alone. As the Columbian put it, “Rather than persistently working to undermine the Public Records Act, lawmakers should be bolstering the law and its applications, recognizing that transparency is essential to democracy.” (News Tribune and Vancouver Columbian)

Spokane parents showed up outside the city’s school administration to voice their complaints about the comprehensive seXXX education bill passed in Olympia.  The protestors waved signs that “decried government overreach, infringement of parents’ rights and the loss of children’s innocence.” The protestors hope their voices carry all the way to Olympia, as they’re asking Gov. Inslee to veto the bill. (Spokesman-Review)

Obviously the Snake River dams actually help the state’s economy  Newspapers on the East side of the state have been trying to get the attention of Seattle liberals for years, on many topics, but perhaps no single issue has generated as much ink by editorialists diminishing salmon runs and the fate of the Lower Snake River dams. The latest to weigh in is the Yakima Herald, which notes that “We have a healthy respect for those seeking to bolster the depleted fish runs — and thus bolster the population of the iconic orcas, which dine largely on salmon. The numbers are grim; the risk of extinction is real. But it’s impossible to ignore the startling and stark projections regarding the Northwest economy and environment should the dams be removed — with no guarantee whatsoever that such action would save the salmon.” Is anyone listening in the offices of the extreme environmental activist groups in downtown Seattle? Anyone? Bueller? (Yakima Herald)

On the east side of the Cascades, they keep a close eye on the weather. Because it turns out that is where water comes from, and water matters. And according to the locals, “If you are looking for some good news, look up, really up. According to the latest report, the snowpack in the upper elevation looks strong.” As the Ellensburg Daily Record points out, especially in these uncertain times, “A good year for agriculture always is important but may be more so if other tourist-oriented segments of the economy take a hit.” (Ellensburg Daily Record)

Previously, Shift announced we would be avoiding partisan criticism over lawmakers’ coronavirus decisions. However, we reserved the right to highlight particularly noxious commentary, and we received that in our in-box today from “Tone Deaf Tina” Podlodowski, the chair of the State Democratic Party.

This is further evidence that Podlodowski must think her fellow Democrats are truly stupid, and will give her organization money if she says anything derogatory about President Donald Trump.  Podlodowski led today’s fundraising email with the widely criticized tweet from Gov. Jay Inslee saying something derogatory about the administration. Of course, this was back before Inslee decided it would be better to tone down his extreme partisanship during the current crisis. But Tone Deaf Tina doesn’t believe in toning down partisanship – she’d rather channel her inner Spinal Tap and turn the partisan volume up to 11. Wonder if her fellow Democrats will reward her for attacking Trump by highlighting her own Governor’s bad behavior? (Washington State Democrat Party email and Governor Inslee Tweet) 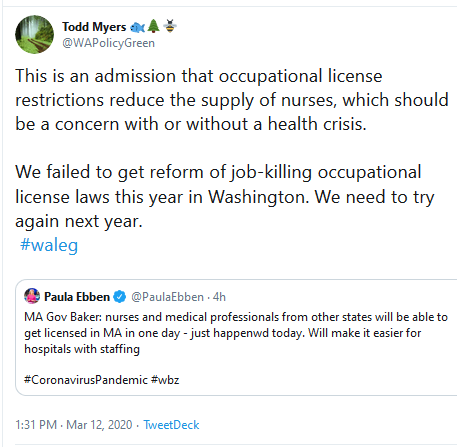