Previously dead legislation might come back to life in the last hours of the Democrat controlled legislature.

The latest environmental “feel good” legislation – that does little or nothing to actually help the environment – is the banning of plastic grocery bags.  The Democrat-controlled legislature passed the bill (SB 5323) despite considerable evidence that the alternatives to plastic bags are worse for the environment. In an ironic twist, Democrats were able to convince a few Republican legislators from timber communities to support the bill due to the expected increase in use of paper bags (for an 8-cent fee).  Timber communities were previously devastated by similar feel-good government actions (like spotted owl mandates) that failed to deliver on their environmental promises. (Seattle Times, Washington Legislature Bill Summary, and Washington Policy Center)

Today, in a presidential primary election in which tens of thousands of ballots will be wasted on candidates no longer in the race (or thrown away because people didn’t want their party preference to be known), Washington voters will be selecting their choices for the Democrat and Republican nominees.  With many of the Democrats top prospects (Warren, Buttigieg, Bloomberg, and Klobuchar) dropping out of the race in the last week (after thousands of state voters had already returned their mail-in ballots), and many people either forgetting or refusing to sign the party affiliation declaration, the interesting result will be how many of the returned ballots will have no impact on the race between Senator Bernie Sanders and former Vice President Joe Biden. (Everett Herald)

Parents across the state are upset over the controversial seXXX education curriculum mandate passed by the Democrat controlled legislature and they are flooding Governor Jay Inslee’s office with phone calls.  Even though the governor has a very weak record when it comes to listening to the views of the public (car tabs, affirmative action, LCFS, taxpayers paying for his campaign security, etc…), callers were encouraging Inslee to veto the extreme measure. (Sue Lani Madsen in the Spokesman-Review)

Negotiations continue over repealing large portions of Boeing’s state tax incentives, which would benefit the State of Washington with more than $100 million in unexpected revenue.  Boeing initiated these discussions with Washington lawmakers in order to avoid increased tariffs from the European Union due to a World Trade Organization ruling.  Even though this will be a huge financial benefit for the state, it is widely speculated that organized labor has instructed state lawmakers to use the opportunity to obtain concessions from the company that specifically benefits the unions. And to think that Governor Inslee though he’d mugged by the company when it was asking for the tax incentives, imagine how he feels now. (Everett Herald)

Having proposed many environmental policies that have incredibly failed to meet their stated goals, it is no surprise that King County Executive Dow Constantine is declaring his support for Governor Inslee’s ineffective Low Carbon Fuel Standard (LCFS).  In an op-ed (co-authored by environmental whack-a-doodle Seattle Port Commissioner Fred Fellerman), Constantine writes that the state needs a LCFS to fight climate change.  Maybe the state would not require such an expensive proposal if Constantine’s mis-management of King County had not meant dramatically failing to meet its own climate goals and failing to meet water quality standards set by the federal courts.  But can we really expect effective public policy from a politician who can’t provide proper security to keep open the state’s largest courthouse or whose top homeless advisor hires strippers to entertain attendees at a homeless conference? (Crosscut, The Seattle Weekly, and Seattle Times)

Liberal politicians’ strict adherence to politically correct law enforcement procedures prohibits retailers from questioning individuals, who are obviously concealing merchandise, before they exit the store with their stolen goods.  This has resulted in an increase in Organized Retail Crime, where individuals are paid to steal specific products for a crime ring.  Efforts to allow retailers to stop suspected shoplifters in the store are not supported by lawmakers, due to fears of racial profiling. (Representative Dan Griffey Op-ed Seattle Times)

Tacoma Mayor Victoria Woodwards is receiving criticism for not mentioning the coronavirus during her third annual State of the City speech.  It was especially curious since the venue and method of the speech were altered due to the virus – it was to be given at Mount Tahoma High School, but instead it was live-streamed in seclusion. As a News Tribune editorial states, “Above all, a mayor should shed light on how Tacoma is gearing up for coronavirus impacts and preparing to escalate its response.” (News Tribune)

The Tri-City Herald is calling for a restructuring of how the state conducts its presidential primary.  The newspaper believes the current method, passed by the Democrat legislature in 2019, is disenfranchising tens of thousands of Washington voters and is the reason why many are not participating.  In an editorial, the Herald supported Secretary of State Kim Wyman’s proposal that would count “unaffiliated” votes separately and allow the party to decide if they want to use the votes in determining their primary’s winner.  (Tri-City Herald) 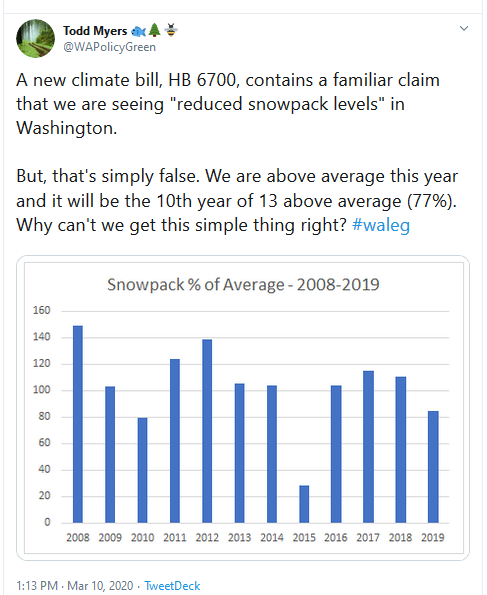