Democrat lawmakers want to increase your taxes to give state employees a pay raise, so union bosses can collect more dues.

Two separate acts of divisive partisan politics are currently being considered by Washington State Democrat lawmakers, as we struggle to economically recover from the coronavirus outbreak. First, unless Governor Jay Inslee acts soon and stands up to his major union campaign donors, state employees will receive another 3% pay raise on July 1st (on top of the 3% raise they received last year).   It would be cruel to the state’s private sector residents, who have absorbed nearly all the lost wages during this crisis, to force them to fund a pay raise for those in the public sector who have been kept on the payroll and have not experienced the same economic hardships.  Plus, the pay raise will add nearly $800 million to the state’s budget at a time when services to the needy are facing drastic cuts. This would be a good opportunity for the governor to demonstrate that the financial well-being of state residents is more important than the campaign contributions he receives from the public employee unions.  Second, despite the multiple problems currently experienced by other states dependent on income taxes, state Democrat lawmakers continue to push for an unstable income tax on capital gains. Setting aside the legal question of whether the tax is constitutional in Washington State (pro tip, it’s not), an capital gains taxes are an undependable revenue source during economic downturns. (Washington Policy Center)

State lawmakers will likely be making spending cuts to make up for the projected $7 billion shortfall in the current budget, yet Democrats are still expected to give their large campaign contributors, state employees, a 3% pay raise starting July 1st.  While budget cuts are expected to hit nursing home residents, college students, people with disabilities, early learning, foster families, and those suffering mental health issues, Governor Inslee and Democrat lawmakers appear to believe state employees should receive a second 3% pay raise in a year.  Inslee’s budget director David Schumacher attempted to play down the pay raise, saying it has a small impact on the state’s budget. Union bosses must be overjoyed that Governor Inslee’s team believes that $800 million (the four-year cost of the pay raise) would be better spent on government employees than on those in need. (Crosscut)

There has been a 53% upsurge in the number of incidents involving the “misuse” of chemicals since the beginning of the COVID-19 outbreak.  The Washington Poison Center says the increase is mostly due to a higher usage of hand sanitizer, bleach, rubbing alcohol, and other household cleaning products. (Bellevue Reporter)

In an extremely rare occasion, U.S. Senator Patty Murray might be asked a question from a member of the public.  (We are not saying this WILL happen, we are just saying it might.)  Next Monday the five-term Senator will be asked questions by the staff at Crosscut.  The publication has asked the public to “help shape the conversation” by submitting a question.  Murray is very protected by her staff and has never held a town meeting in her 28 years in the U.S. Senate.  In 2004, Murray did take questions from a Vancouver high school class, when she made controversial and uninformed comments about terrorist Osama bin Laden that made national news.  (Crosscut and Seattle P-I)

Seattle City Councilmember Kshama Sawant is calling for the resignation of Seattle Mayor Jenny Durkan, seemingly because the mayor does not support Sawant’s job-killing tax on Seattle businesses and has not immediately dismantled the Seattle police department.  Sawant has a meaningless online petition calling for the Mayor to resign and is demanding that her fellow city councilmembers impeach Mayor Durkan. Just another day in the life of Seattle’s useless socialist. (Seattle Times)

Constructing a tunnel is now considered an option to replace the crumbling 36-year-old West Seattle Bridge.  A long-time tunnel advocate has provided the concept to build a 500- foot tunnel under the Duwamish River instead of building another high-rise bridge.  Seattle City Councilmember Lisa Herbold of West Seattle has added tunnel construction as an option to be considered by the city’s Department of Transportation.  Currently the bridge is closed as the city spends $33 million to reinforce the structure so it can be used until another option is decided. (Seattle Times and Westside Seattle)

The News Tribune supports bringing in an independent state review into the March death, while he was restrained by Tacoma police officers, of Manuel Ellis. The paper contends it is best to view the case outside the political battle that has erupted between Mayor Victoria Woodards and the Tacoma Police Department. (News Tribune)

A UW senior has used his $1,200 stimulus check to buy meals for Tacoma police officers.  21-year-old Kendrick Allen made the gesture after seeing some of the hate displayed by some of the protestors toward police officers.  Kendrick said, “I understand the protest — I’m mad about George Floyd’s death as well. But the signs that say, ‘All cops bad, kill all cops,’ and things like that — it’s just ridiculous.  Most cops out there are good, they’re good people, they’re risking their lives.” (MyNorthwest)

The Eastmont School District (East Wenatchee) has urged Governor Inslee to allow local school districts to consider “traditional” education as officials determine how to resume school in September. Every Eastmont school board member signed the letter encouraging the governor to allow local school officials to determine what is best for the health and education of their students.  State guidelines for the resumption of K-12 education are expected to be issued by the end of June. (Wenatchee World)

Franklin County Commissioners will hold a special meeting on Wednesday morning, to review an application to move the county into Phase II.  The online meeting is scheduled for 9:00 AM.  The Benton-Franklin Health District Board approved the application last week.  Benton and Franklin counties are among the five Central Washington counties (along with Chelan, Douglas, and Yakima) still stuck in Phase I. (YakTriNews) 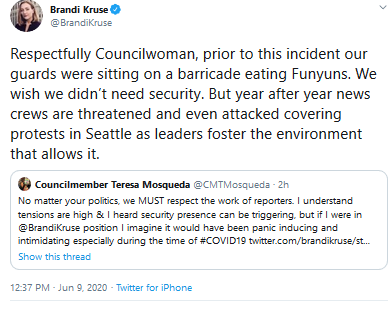 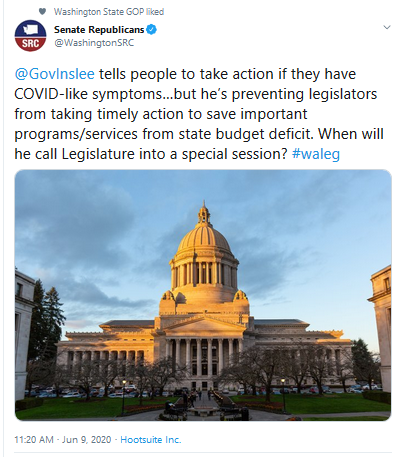 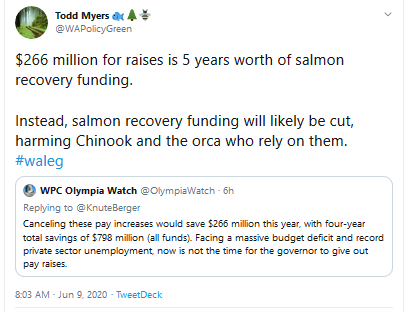