After revelations that the dials Governor Inslee was using to explain the state’s COVID-19 response were meaningless and not attached to any actual data, they have suddenly disappeared.

Governor Jay Inslee has taken down the infamous dials his office used to provide the “science” and “data” behind the governor’s decisions.  The dials were roundly criticized as being meaningless for they “do not accurately reflect the true underlying data, are influenced by data which are not available, and are, instead, based on outdated information.” Evidently some aide convinced the governor that bad data does not make for good science. (COVID-19 – Risk Assessment Dashboard and Washington Policy Center)

The Yakima Herald editorialized on how strange it is that Washington, the home of major international technology companies, was the hardest hit state in the “Scattered Canary” scam, especially after the state recently invested $64 million in a computer system that promised to protect the Employment Security Department (ESD) from these kind of fraudulent activities.  The failure of the state to not act upon numerous and obvious “red flags” resulted in the unprecedented looting of “hundreds of millions of dollars” and delays in paying legitimate unemployment benefits to thousands of Washington citizens.  This failure by Governor Jay Inslee and his hand-picked major campaign donor/ESD Commissioner Suzi LeVine has caused unnecessary suffering among thousands of individuals.  This is especially true in Yakima County, which has the state’s highest per capita coronavirus infection rate and already had the state’s third lowest (behind only Grays Harbor and Pend Oreille counties) medium income.  (Yakima Herald and Washington State Office of Financial Management)

When schools are allowed to resume, the schedule will likely look far different as educators and health officials decide how to reduce students’ exposure to the coronavirus.  State education officials, who are still scrambling because the system they helped build was woefully unprepared for distance learning, are currently exploring various options that will incorporate lessons taught in schools and more home-based instruction.  Unfortunately, the extremely partisan group that Democrat Superintendent of Public Instruction Chris Reykdal has brought together to advise him on how schools should resume (the “Reopening Washington Schools 2020-2021 Workgroup”) is made up of mostly union members and other liberal special-interest groups, and has no representatives from the online education community.  (Q13 and Reopening Washington Schools 2020-2021 Workgroup membership list)

Washington State school employees are scheduled to receive a 1.6% pay raise and an increase in their “Cadillac benefits” package on July 1.  The private sector has suffered an historic jump in unemployment, while very few school employees have lost wages due to the coronavirus outbreak.  The state could save millions of dollars, possible a billion, if the pay raise and benefit increase was delayed to a more appropriate economic time . (Washington Policy Center)

Oregon officials continue to open portions of their state at a faster rate than their (Democrats only) Western States Pact partners in Washington.  Public gatherings of up to 100 people will now be allowed in many of Oregon’s medium-sized counties.  Could someone please remind us again why Governor Inslee paid so much attention to the forming of this partisan “pact”, and what benefit Washington citizens have received from the counsel we are receiving from our inclusion, when all other member states are opening faster than we are? (The Columbian)

Because of a story that was first reported in the “Say What???” section of our May 28th Daily Briefing, Democrat congressional candidate Carolyn Long’s campaign issued an apology for falsely implying that the Longview Daily News had made positive comments about the candidate.  Shift caught Long trying to inflate her support when the campaign sent out a fundraising email with the Daily News’ logo above a quote that had been included in a Letter to the Editor from a campaign volunteer.  Shift’s revelation of this devious action forced Long’s campaign manager to write a public letter of apology. (Note: it is interesting to see Long’s campaign characterize this obvious attempt at deception as a “misunderstanding.”) It is worth mentioning that Carolyn Long forced her campaign manager to sign the apology letter, thus taking the Jay Inslee approach of hiding behind a staffer to relay negative news. We wonder if this lack of personal responsibility approach is a “character” trait which Long takes with her into the college classrooms she teaches in? (Shift’s Daily Briefing, Longview Daily News, and Seattle Times)

Despite handing out 13,500 laptops, the Seattle School District is dramatically failing in educating students via distance learning, and has no idea how many students are participating in various educational activities.  The school district “cannot say how many of its students are showing up to virtual classes, handing in assignments, doing paper packets, or have even made contact with school staff.” Teachers say very few kids are participating in online lessons, and even a lower percentage of “children of color, low-income students, and kids with disabilities” are taking part. Remember, last month the Seattle School District announced nearly all students would be receiving straight A’s during the coronavirus outbreak, so maybe the students were at least paying attention to that news and determined that schoolwork was an optional thing. (KUOW)

Arrest records indicate that the City of Seattle’s leadership is not providing an accurate assessment of the riots that have taken place in the city.  Mayor Jenny Durkan said much of the violence has been “instigated and perpetuated by white men,” yet arrest records indicate a broader spectrum of individuals were involved.  Police Chief Carmen Best’s claim that it was non-locals who caused the damage, is currently not supported by arrest records, but residence information is not complete for many of those who have been incarcerated. Records on how many of the protestors were practicing appropriate social distancing are also unavailable at this time, though future positive test results may provide some answers. (Seattle Times)

State Representative Tom Dent (R-Moses Lake) stresses the importance of getting the agriculture community back to work as soon as possible.  Dent says many urban area legislators are unaware of the negative impact Governor Inslee’s “Stay Home” orders have had on farmers.  The potato industry has been especially hard hit, with restaurants and bars being its major consumer. Dent is worried that further delay in lifting the orders will seriously impact agriculture’s ability to provide products in 2021.  (Washington AG Network)

Othello school officials are honoring a vote of high school senior class members and are planning to hold a “traditional graduation” in July. Graduating students voted to hold a normal graduating ceremony later rather than an online version in June.  Currently the Othello High School is planning for a July 17th student-only ceremony. (iFIBER One)

With all the negative news, it is nice to feature this positive story of a 2020 Washington State University graduate who donated his first paycheck to the fund that paid for his scholarship. Neftali Garcia is the first in his family to graduate from college, partially due to a scholarship from the Washington Apple Education Foundation.  Garcia took his first paycheck from Zirkle Food Company and donated back into the fund to help another student following behind him. (YakTriNews) 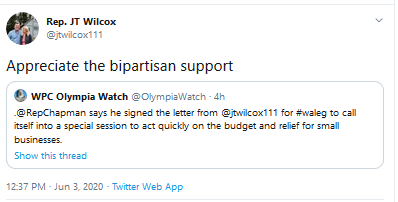 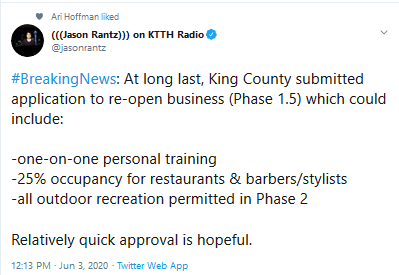