Republican lawmakers continue to be frustrated by Governor Inslee’s stubborn refusal to include others to improve resident’s confidence in state health orders.

While hundreds of thousands of Washington residents are financially hurting, Governor Jay Inslee has colluded with union bosses to give state workers a raise (while working fewer days).  In an act of selfish greed, unionized state workers will actually make more money under Inslee’s “Furlough Plan.” Remember, nearly all state workers received full pay and benefits (whether they were able to work or not), while those in the private sector were losing their wages (and dealing with the ineptness of Inslee’s Employment Security Department). (Shift)

Responding to public demand, Shift is once again selling “Governor Zero” face masks. After the governor’s unilateral action to force Washington State residents to wear face protection while in public, Shift’s readers will want to display how they feel about our state’s chief executive.  The masks are 3-ply and 100% cotton. You can purchase your “Governor Zero” facemask for just $25. Proceeds will go towards supporting Shift (the leading conservative daily newsletter and blog in the Washington) and the Northwest Republican Community Fund’s COVID-19 response by supporting Hopelink (which is assisting our neighbors who have lost their wages).  Order today, before we sell out of the masks again! (Shift Face Mask order form and NWRCF/Hopelink)

Frustration is growing among Washington State Republican legislators over Governor Inslee refusing to bring back the legislators or even consulting with them before making major decisions that impact the lives of Washington residents.  Representative Andrew Barkis (R-Lacey) responded to the governor’s unilateral order for wearing face masks by stating, “Once again the Governor (is) acting completely unilaterally, makes a decision and mandates an action to the people of the state without consulting or even notifying the Legislature beforehand. We have no say in any of these actions, no opportunity to have a basis for the decision or to look at alternatives or offer other solutions.” (Andrew Barkis Facebook post)

House Republican Leader JT Wilcox posted the opinion of the former House Republican Caucus’ attorney who believed Governor Inslee’s face mask order would likely be upheld by the courts.  While opposing the governor’s orders, Allen Hayward wrote, “I fully support and encourage people who can wear masks to do so. I strongly believe that the Governor’s mandate that masks be worn, which I oppose, will be upheld by the courts.” Hayward said that unfortunately the legal precedent for the governor’s orders are strong. (JT Wilcox Facebook post)

Washington State Supreme Court Justice Mary Yu has stated she will not recuse herself in any court hearing on the state’s face mask orders, despite tweeting her support for the directive.  Yu, who has previously been admonished by the Commission of Judicial Affairs for her social media posts, tweeted a picture of herself in a face mask with the State Supreme Court’s logo with the hashtag “#MaskUpWA.”  It is not known if, during these times of reduced state revenues, Washington taxpayers paid for the specialty face masks for court members. (KOMO News and Twitter)

In an outlandish and irresponsible tweet, Washington State Democrat Party Chair (and failed 2016 candidate for Secretary of State) Tina Podlodowski says the Republican party is “trying to kill every voter it can’t disenfranchise” because President Donald Trump is not ordering all Americans to wear masks. This is beyond appalling and it would be just as bad as an irresponsible Republican stating Democrats want all old people to die since 8 of the 10 states with the most coronavirus deaths have Democrat governors.  This is just the latest example of how fortunate Washington voters are to have bucked a Democrat tide in our state in 2016, and made sure this reckless partisan politician was not elected to oversee our state’s elections. (Twitter and Statista)

A report to the Washington State Legislature reveals that a proposed rail passenger line between Seattle/Ellensburg/Yakima/Pasco/Spokane would be costly to operate and have few passengers. Consultants who conducted the study said that a lot of money would be needed to improve rail line capacity, make station improvements, and acquire trains, and yet the rail alternative would still be less efficient than traveling by car. Predictably, some rail advocates were not swayed by the negative study. (NW News Network)

A class action lawsuit has been filed in federal court against the City of Seattle by individuals and businesses that reside in or near the CHAZ.  The lawsuit contends that the city’s actions allowed the occupation of the area to take place and as a result foot and vehicle traffic in the area was restricted and police and fire protection were severely hampered.  The plaintiffs are seeking to have the city to pay for all physical and monetary damages that they have suffered due to the CHAZ. (FYI – The City of Seattle is self-insured and thus taxpayers will be forced to pay for the elected officials’ actions.) A statement from the plaintiff’s attorney proclaimed, “It is time for this City-endorsed occupation to cease. Our clients need their neighborhoods and lives back, and the City has been indifferent to our clients’ other calls for help.”  (Class Action Lawsuit Filing Document and Seattle Times)

After a weekend of violence which saw one person dead and three others injured, the CHAZ has become less of a cool place to be seen, and many people have left.  A few protestors remain and state they will act to keep the Seattle police from moving back into the East Precinct. (Seattle Times)

Despite the endless greedy attacks by left-wing city councilmembers, Amazon has again demonstrated its support for the region in purchasing the naming rights for the remodeled Seattle Center Coliseum. Amazon will not use their name on the facility but have chosen to call it “Climate Pledge Arena” and have stated that the building will aim to have a zero-carbon footprint. (Seattle Times)

With a Wednesday and Thursday schedule, Emerald Downs has resumed horse racing in front of no spectators. With many of the nation’s tracks focusing on weekend races, Emerald Downs is hoping to attract online betters from across the country with a unique schedule.  As opposed to tribal casinos who ignored the governor’s emergency orders to bring gamblers back into their facilities, Emerald Downs has been working with the state health officials to resume operations. (News Tribune)

Following Governor Inslee’s announcement that the state will fine businesses who do not adhere to his (Yakima County only) “No Mask, No Service” orders, local law enforcement agencies are evaluating the orders before determining how they will proceed.  While the governor’s office has stated that they are allowing local law enforcement to determine how to enforce the governor’s mandatory mask orders for the state, the governor did state that the “No Mask, No Service” order on Yakima County businesses is a “legal order” and state officials have stated they would take away business licenses for those who did not comply. Both the county prosecutor and sheriff have said they are researching the orders.  One wonders if there would be less resistance to the governor’s unilateral orders if he consulted with Republican state legislators. (Yakima Herald)

After a 1.8% cost of living pay hike, the base salary for senior Spokane Public School teachers will rise above $100,000.  Even prior to the coronavirus outbreak, the Spokane school system was facing severe financial difficulties due to the 13.2% pay raise teachers received in 2019, and was looking to make cuts in educational programs. (Spokesman Review)

A second inmate at the Cayote Ridge Corrections center has died due to the coronavirus.  A convicted child molester died at a local hospital after he contracted the virus at the Connell facility. Prison officials said, “We’ve continued to escalate our response at Coyote Ridge to help prevent the spread of this virus and protect the staff as well as the remaining individuals housed there.” (iFIBER One) 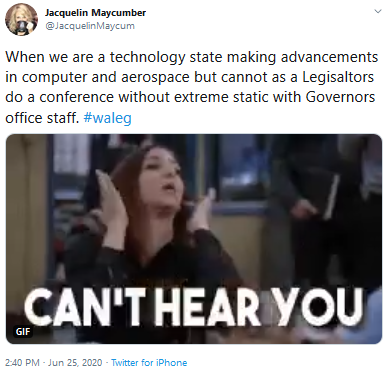 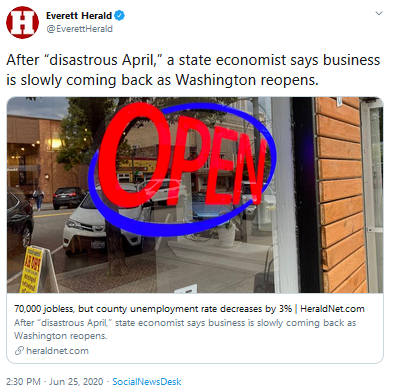